I have two switches in my bathroom. The first controls two lights, the second controls a fan.

I opened the switchbox and am confused by the way it is wired. Here is a drawing (I did not draw ground wires, each switch has one): 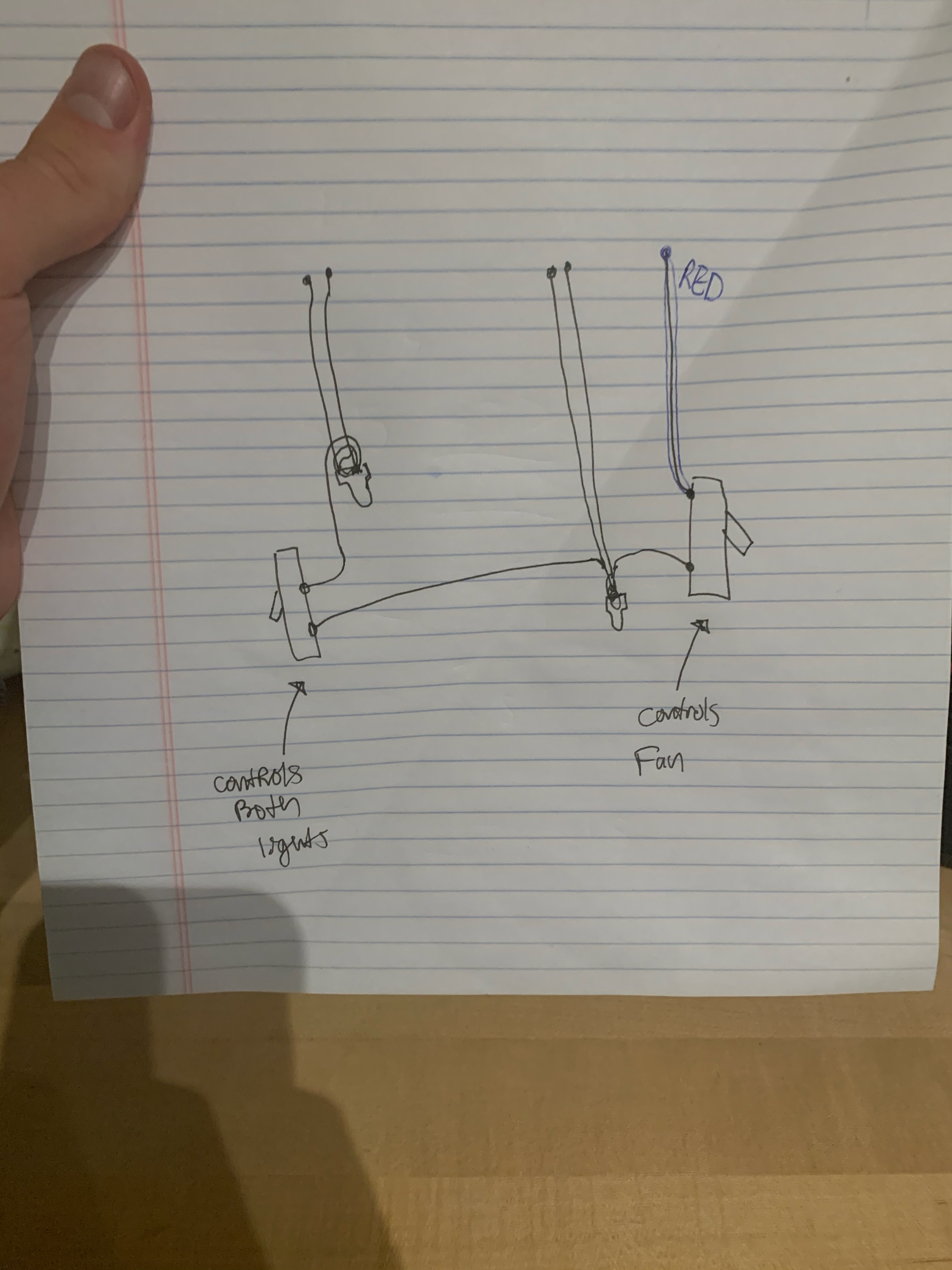 My explanation of the picture (possibly bad terminology) is we have two neutral wires coming out of the box that are wire-nutted and pigtail connected to the top "traveler" of the switch that controls both lights.

This wiring situation is not intuitive to me (I know nothing). I thought maybe the two wires at left were because there are two lights, but why are there two wires on the right for just the fan? And why are these switches wired together via the pig tail across the bottom? I expected to see two hot wires going to each switch, and no connections between them. How does the switch that controls the lights work without a hot wire going to the switch?

If it is the case the the two wires on left are for each light, can I move one of them to the cable nut on the right to have it be controlled by the other switch?

So the short answer is you can take one of the wires out of the nut and swap it with the red wire of the fan, and that will do what you want.

The medium answer is you could do what Harper suggested and replace the single switch with a double switch and control all three independently. You would take the bottom wire from the switch and place it in the brass terminal, and one each of the 2 wires going out to the lights in the 2 silver terminals.

The long answer is, your drawing only shows "hot wires". They should all be black or red. My guess is that nut of 4 wires is a hot coming in, a hot going out to the next outlet or switch, and the 2 pigtails that "energize" the switches. The neutrals are either at the fixtures themselves and were never routed in your switch box, or what you think are the ground wires are your neutral (are they bare wires or white?). The ground being the metal clad sheathing of the wire that is common in older homes.

I'm confused by your description of the wiring so I'm just going to work from the schematic you drew and your explanation of what you're trying to do.
The middle cable in your schematic should be the line providing power to the switches. One pigtail from this line provides power to the switch on the left. The switched-hot line of that switch supplies power to the two lights.
The power-in line also pigtails to the switch on the right powering the fan. The red wire from that switch is the switched-hot to the fan.
In order to have one switch operate one light and the other switch the fan and the other light you need to do the following.

Be sure to use the screws on the switches and not the backstabs which can be unreliable. Also make sure that the wire nuts are tightly cranked down. Reassemble the switches in the box and you should be good to go.