Sand-blaster or angle-grinder to remove rust?

To remove the rust from my beloved barbecue pit, I am considering using an angle-grinder or renting a sand-blaster. Having never used either tool, there are several spots that look hard to reach with a grinder which is why I’m considering renting the sand-blaster. Which tool would be a better match for the task? 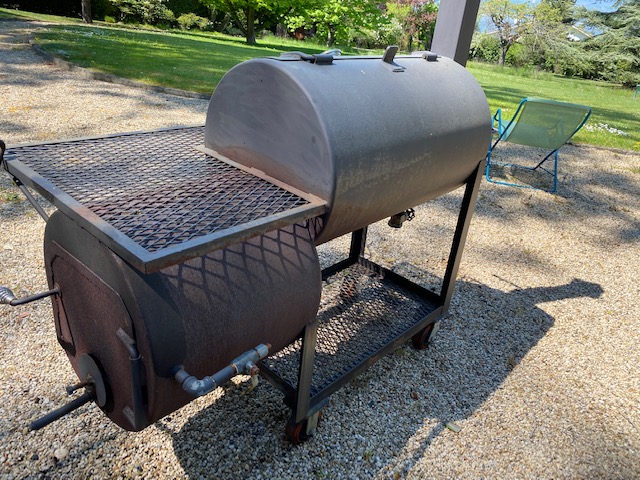 That's not me talking. It's NASA. Their location at Cape Canaveral ("Who picked this place? Nikita Khrushchev?") ... has a huge problem with rust due to being tidal and subject to sea spray. What a lovely place for millions of tons of steel latticework gantry structure, in their dozens of launchpads. So they have a rather significant division dedicated to rust control, and they have a web site: http://corrosion.ksc.nasa.gov which you can read yourself.

NASA, naturally, "did the research". They have, for years, prepared samples using various techniques (not to mention their experience maintaining their own structures). Media blast to SSPC-SP10 (near white metal) is head and shoulders above the second and third, which roughly tie: needle scaling and grinding.

Once you've media blasted to near white metal, the quality of your paint is the deciding factor. We had somebody media blast a metal structure, then paint some of the first "non-lead" primer that I procured for $11 a gallon ($25/gal inflation adjusted) at a local paint manufacturer, then topped with their same brand black alkyd topcoat. 20 years gone, the black started chipping and peeling, but the primer is still going strong. Less than 0.5% of the area has any detectable rust activity. On the other hand I've used excellent $90/gal primers on power-wirebrush prep, and had it fail within 7-8 years.

If Cost was a factor vs type of base metal being thin like an automobile then i would suggest sand blast. If it was 2" thick and cost was a consideration then grind. thick metal would take the grind a bit more.

Not the answer you're looking for? Browse other questions tagged tools metal rust-removal angle-grinder or ask your own question.