My kitchen has a light switch by the sink which operates a pendant light above the sink. I am making a DIY replacement light using a 12 V LED strip and a 4 ft. wooden dowel to be suspended horizontally above the sink. 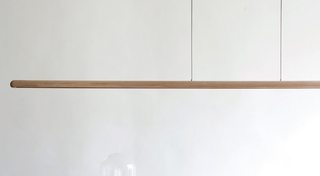 The length of LED strip I will be using should draw ~11 watts. The hanging light is too narrow to contain the LED driver (https://www.amazon.com/dp/B07MSBK9GV/ref=cm_sw_em_r_mt_dp_U_rvVQEbWE4CNW6) itself, and I understand it's a bad idea to cram the LED driver in the ceiling junction box for heat concerns and accessibility.

I am wondering if I can simply extend the existing wiring from the switch to reach the cabinet below the sink, where I can splice in and mount the LED driver on the back wall of the cabinet with more breathing room and accessibility. Can I leave the rest of the wiring untouched? Is it a concern to have 12 V running the rest of the way (probably about 10 feet) to the ceiling box on the existing wiring?

I don't particularly care if it's precisely up to code as long as it is safe, and I know those aren't necessarily mutually exclusive. But I also know I probably don't know enough about this stuff to recognize everything that may be unsafe about it. I suppose a 2 or 3 amp fuse between the driver and light would be a good idea? Should the LED driver be in a junction box since its 120 V coming in? Would that defeat the purpose of having it in a more ventilated area?

Is this a bad idea, or can I make it work safely with enough precautions?

Browse other questions tagged code-compliance led low-voltage transformer or ask your own question.

3
Does code allow for in-wall mounting of low voltage transformers?

10
How can I mount an 12V transformer for LED lighting inside a wall?
0
How do I fix this wiring to properly run LED lights? (More details/products added)
1
Control 12V LED circuit and 120V power supply from one switch
0
very confused on the wiring for recessed lighting
0
NEC code-compliant hard wired hidden LED driver
0
Powering 2 switches from 1 switch, legal? (not 3-way)
0
Adding Under Cabinet LED Strip with Direct Power
0
Do I have the right supply list to start my under cabinet LED project?
1
LED mirror wiring (reversed polarity connection from manufacturer)
0
Why does my LED light flicker for a few minutes after being turned on