I installed four 4-ft. LED shop lights on the ceiling of my garage and linked them together. Currently, they receive power by plugging in one of the shop lights into the duplex electrical outlet where the garage door opener also plugs into. The problem with that is that the outlet is not switched.

There is currently a light fixture by the garage door opener, in the middle of the ceiling. It has switched power, controlled by a switch near the entry door to the garage. I would like to convert that light fixture into a duplex GFCI outlet. When I removed the light fixture from the ceiling box, I saw this: 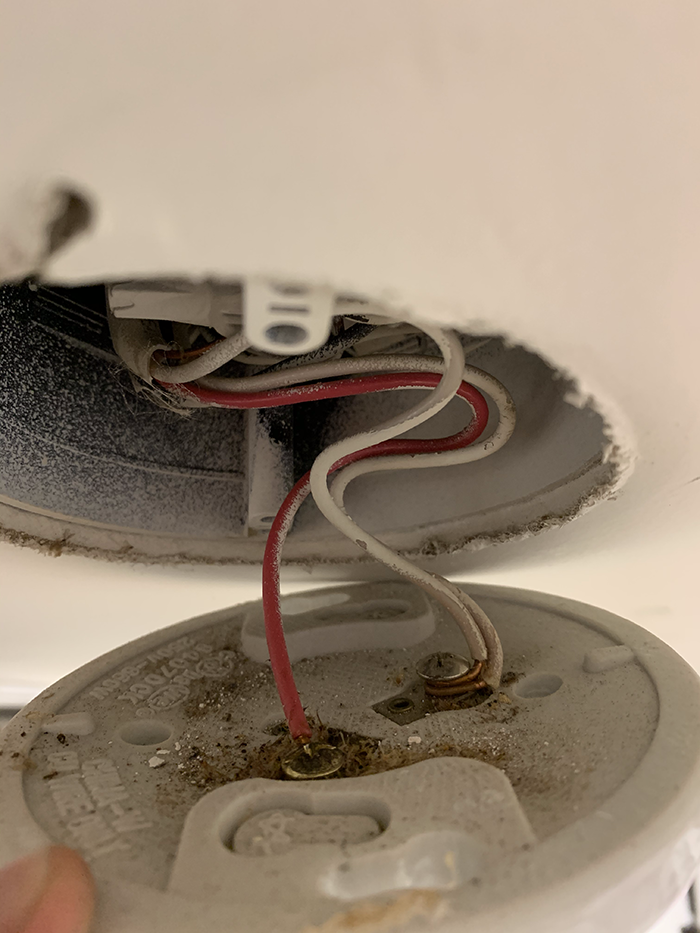 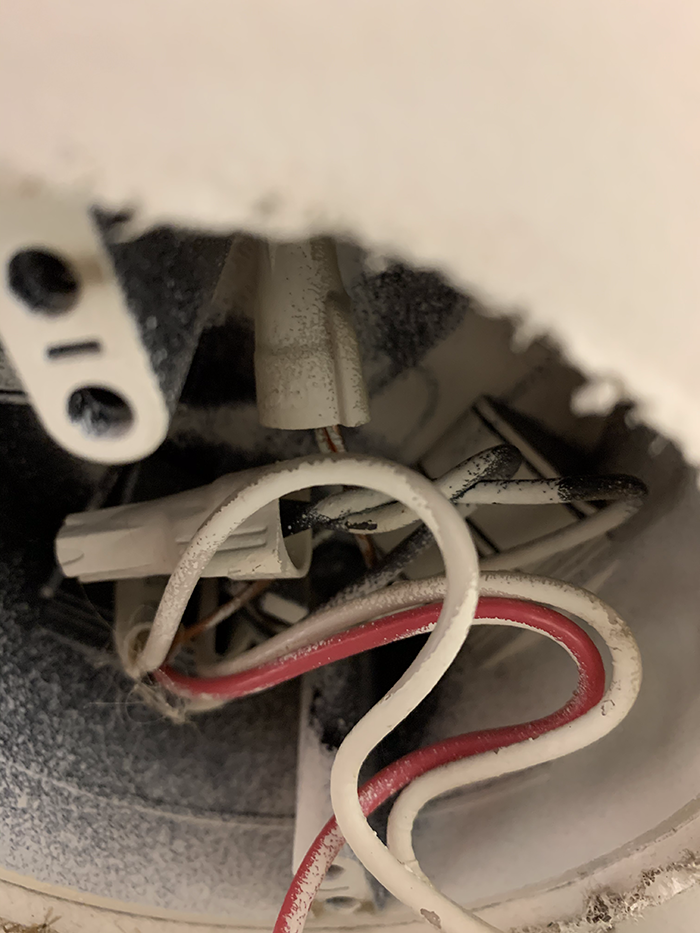 When I install this GFCI outlet, I assume I should treat the red wire as if it were a black wire, connecting it to the LINE (brass) terminal, then connect both white wires to white (silver) terminal, and finally pigtail a ground strap and connect it to the ground terminal on the GFCI outlet?

You cannot use a GFCI here. Fullstop.

It doesn't matter if you want to, nor if you think Code tells you that you must. (I don't think it does). A GFCI is absolutely not allowed on the ceiling, because you would have no way to TEST or RESET it. Which means it wouldn't ever get tested. Which defeats the purpose.

Lamps take switched-hot and neutral. That's all you want. Do Not Mess with anything else, or you will have a nightmare on your hands.

The whites are neutral. They are using it both as service to the lamp and also a splicing block to carry neutral somewhere else. Just keep them together and attach your lamp also, e.g. with a pigtail.

The red wire is your switched-hot supply to the lamp. And just so you know, red is the "conventional" color for switched-hot, where colors are possible. If you're used to seeing black, it's because common /2 cables are made in black and white, but better electricians who color-code wires will tend to use red for switched-hot.

It's really common for wires to enter a box, and then continue onward to other locations. For instance, if you have multiple lamps, they all need switched-hot and neutral, so you might carry those onward to the other lamps. Or if you have other always-hot circuits, you might care always-hot onward (which would have nothing to do with the lamp, obviously).

I would encourage you to start thinking about using colored tape to mark wires by their function. When you're able to think that way, instead of just blindly following recipes you find on Google, electrical gets a lot easier and you become able to do more stuff.

Here is how you mount a receptacle on a 4" octagon box. 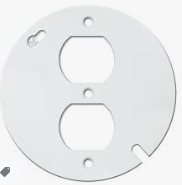 By the way, don't trip about online prices. In-store they'll cost about a dollar.

You mount the receptacle to the plate using the center screw. THEN, you attach the wires (including ground) to the receptacle, and button it up. The slant is specifically designed to keep the recep from hitting the screw towers.

Most electricians will use the red wire as a switched hot when there is a choice. You will also see this on many motion lights and pre wired switches where the switched conductor is red. Black may be the switched hot and should be if a white black switch leg with the white always hot but should be remarked as not white. But in a x3 cable with white, black, red, ground the red is either always hot or a switched hot.

It's likely a switchloop with an always hot and switched hot but with a neutral at the switch location. As is required for new construction in case you want to install a smart switch that needs a neutral.

IF you want the outlet to be switched then your plan is fine.

If instead you want it to be always hot then instead connect the black wires to the line terminal and cap off the red.

1
How do I wire a 3 wire receiver unit to a ceiling fan that has 6 wires from the fan unit
0
Oddball wiring for ceiling light
2
Changing garage light socket to outlet, found wiring problem
3
Should neutral and ground wires tied together in junction box?
1
3-way switch tied to box, one switch removed, can't make sense of it
0
How should I connect a new outlet cable to a box with two existing cables?
1
Wiring a receptacle from a ceiling box in a basement
1
How to install vanity light - wall box has 2 white, 2 red, 2 black, 2 ground wires