Turning on light fixture trips GFCI on a different circuit

When I turn on the light fixture in the bathroom, the GFCI in the bedroom trips and cuts the power in both places. The bathroom and bedroom are on two different circuits, controlled by two separate breakers in the breaker box. If I turn off the breaker to the bedroom, I can turn the bathroom lights on. The bathroom light fixture is controlled by two light switches, like the switches at both ends of a hallway. One switch shares its box with an electronic timer that controls the ceiling fan. The other switch shares its box with a GFCI outlet, but this GFCI in the bathroom isn't tripping--only the bedroom GFCI trips. A three-light tester shows all outlets as wired correctly, and the test button on the bedroom GFCI cuts the power to the bedroom outlets as expected.

I've seen the suggestions about a ground/neutral connection causing this kind of problem, but I can't find any such connection.

Here's the wiring of the switch and fan timer in the bathroom: 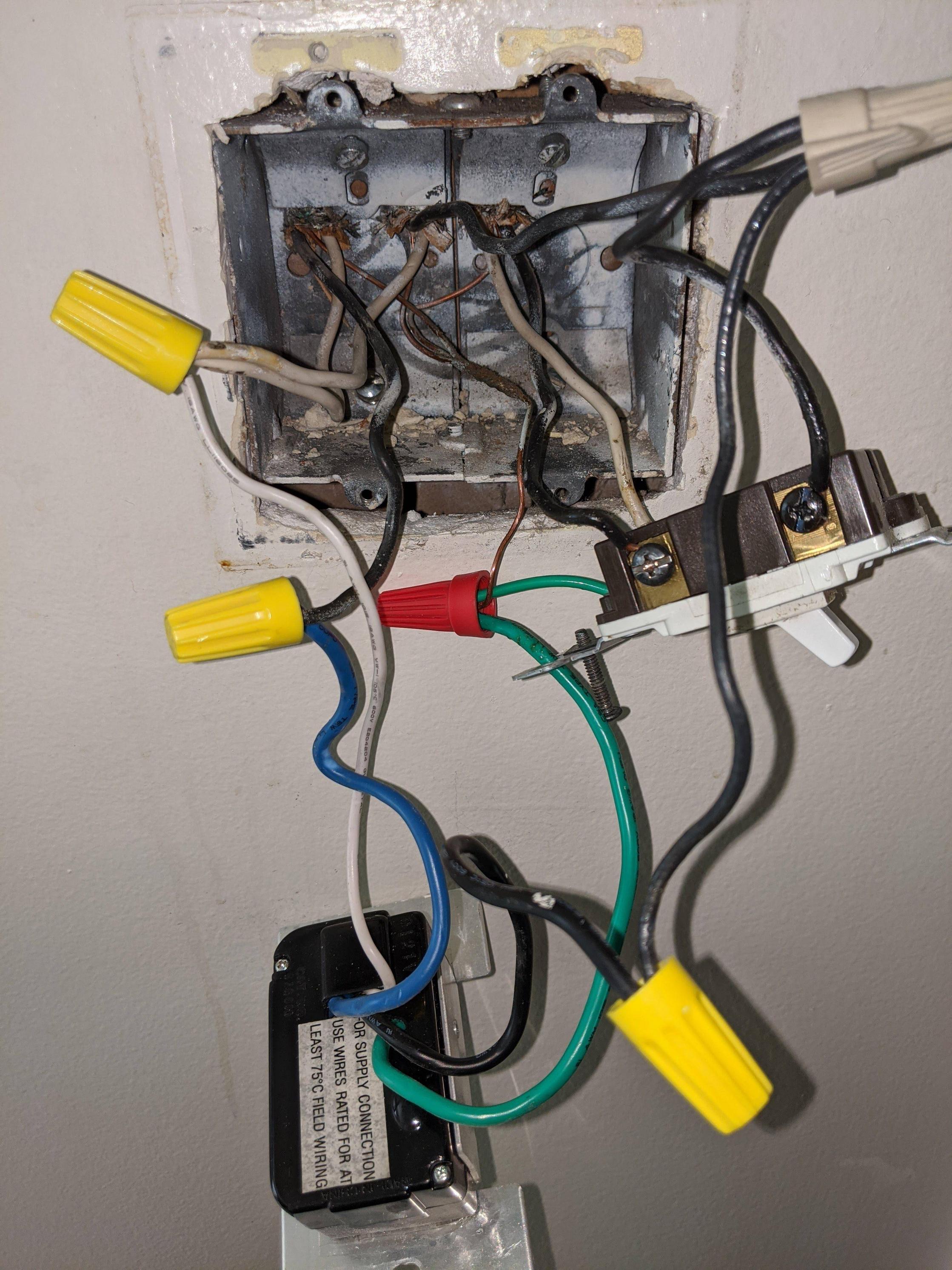 Here's the wiring of the switch and GFCI in the bathroom. Note, this GFCI is not the one that's tripping. 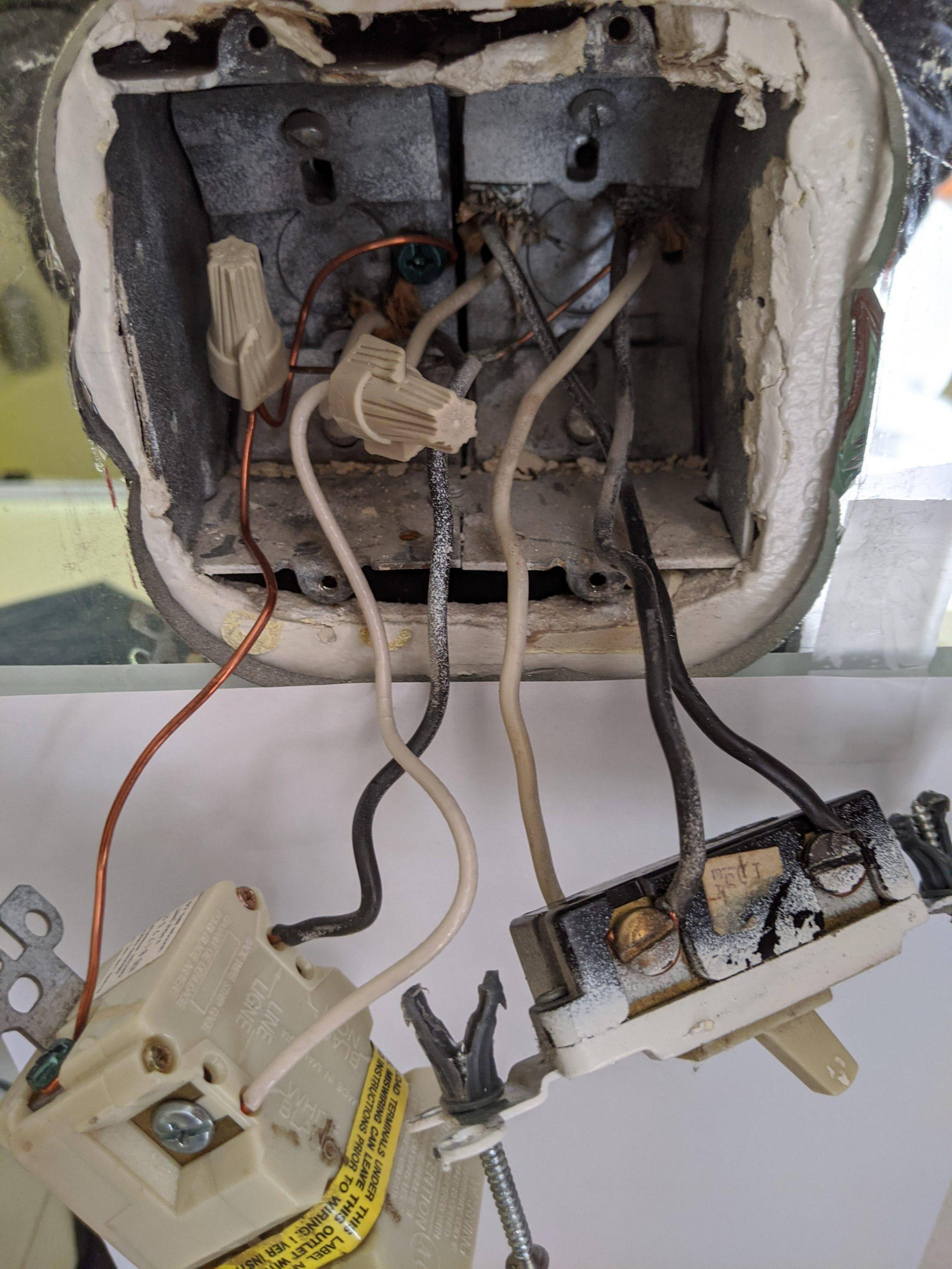 It's the 3-way switch

Note that you have a 3-way switch where you have black and white on the travelers, and no red wire exists.

You're not allowed to do that. Neutral needs to return the way it came. You cannot wire a 3-way switch this way at all. 3-ways are supposed to be wired more like this.

So this deal is nope. You cannot have 3-way switches this way. I know it works, and it's hard to tell you that you can't do something that works, but lots of things in electrical will work and will kill you. Also, it doesn't work.

So you have 3 options: the switch can be in either location ,or both with a lot of work.

Wiring it for BathroomGFCI box only

Wiring it for BathroomTimer box only

If you want it at the BathroomTimer box, then you convert the former travelers into an old style switch loop (though, this is not legal). You start by removing the BbathroomTimber box's black jumper between the 3-way switch and the tan wire-nut. That goes away.

Now on the BathroomTimer switch, remove the white traveler, mark it with black tape, and put it on the Common screw you just liberated. We're done here.

Back in the BathroomGFCI box, remove the switch altogether. Take the white former traveler, mark it with black tape, and put it on the LINE side of the GFCI with the other black wire. The two black wires that used to be on the switch, join those with a wire-nut.

Wiring it for BOTH

Not the answer you're looking for? Browse other questions tagged electrical gfci grounding or ask your own question.

2
GfCI trips in bathroom
6
Why is this light fixture tripping the GFCI?
1
GFCI receptacle with a light fixture with an on/off switch in between
1
Wiring a light fixture in bathroom attached to a switch and GFCI
1
GFCI on a different circuit keeps tripping
2
Light Fixture Trips Breaker
0
GFCI sometimes trips when light switched, or just randomly
0
Ceiling fan on one circuit tripping GFCI on separate circuit
2
How to Wire a Light, GFCI Outlet, Switch and 2 Outlets on a single circuit