Is a too-shallow foundation allowing excessive water into my dirt crawl space?

I live in a local minimum for my neighborhood, and in fact my house is built on the banks of a stormwater drainage ditch. Most of the rainwater from the road is collected by stormwater drains and fed directly into the ditch via a pipe, but the water that falls directly on our own and our neighbors' yards still has to make its way around (or through) our house to get to the ditch.

The house was built in 1920 and originally had a limestone wall foundation, parts of which have been replaced over the years - mostly with CMUs on a poured footer.

At the lowest end of the yard is the entrance to our crawl space. It appears that the foundation wall that runs along the slope (perpendicular to the ditch) was replaced with CMUs at some point, but it has another interesting feature - a large L-shaped concrete pour: 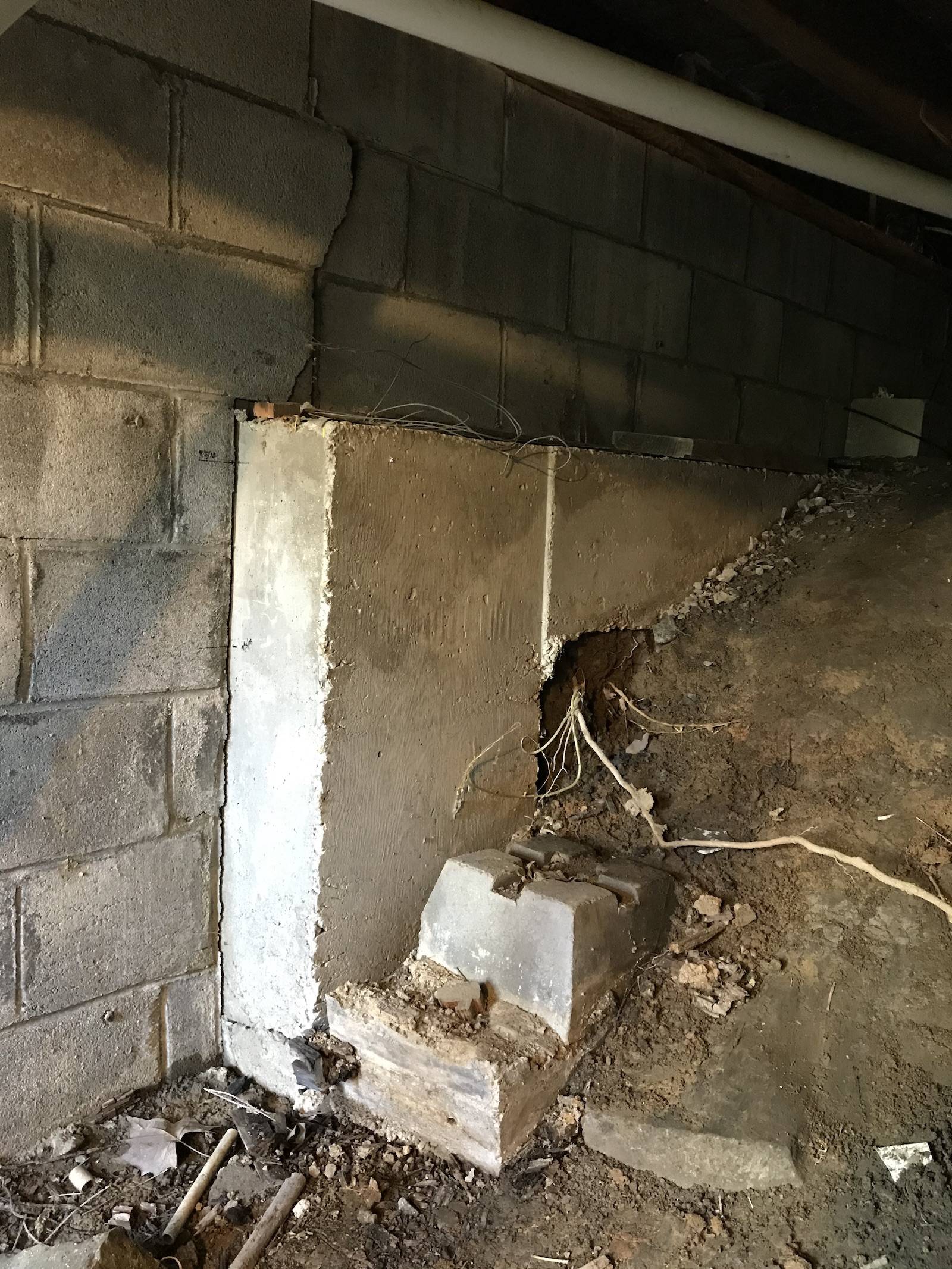 My guess is that they temporarily supported the house on the smaller pour+embedded deck block you see immediately to the right while they poured this footer. In fact when we bought the house there were still some posts standing on those blocks, though they were loose and no longer acting as support.

During the wetter months (winter/spring), this area is quite muddy (though no standing pools of water usually). My theory is that the footer is too shallow, so water is migrating under it and wetting the basement. The fact that there is a tree root growing through that space seems to give further credit to this theory.

As you can see, inside the crawl space the terrain follows the natural slope of the yard. But on the outside, a retaining wall made of railroad ties holds a large amount of soil up against the outside of the foundation, rather than letting the yard slope down naturally towards the ditch at the bottom: 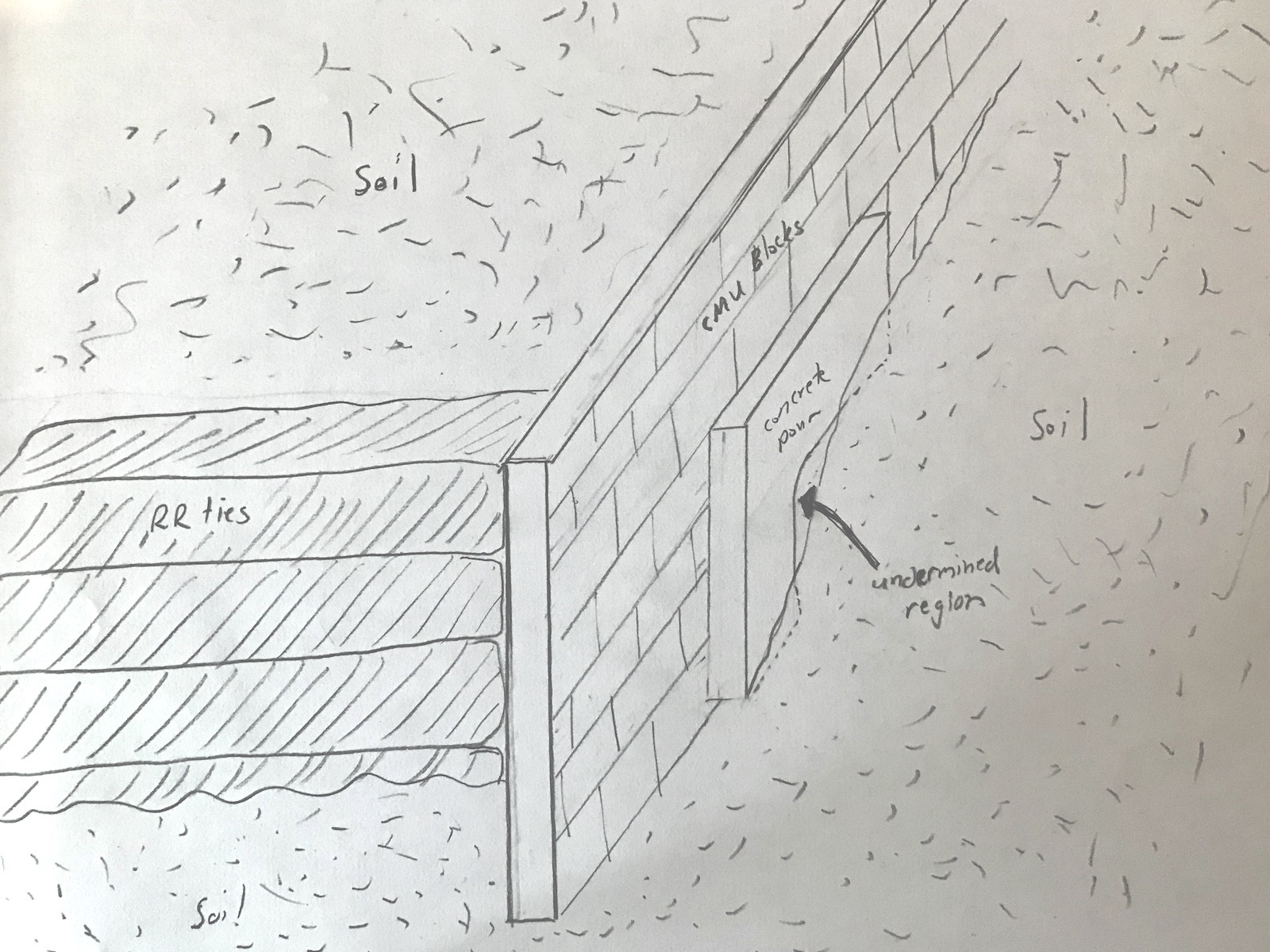 My thought is that the retained soil on the outside acts as a sponge, and then slowly releases this moisture into the crawl space. Would making the footer deeper help keep the water out? If so, what is the best way to do this? My current plan is to reinstall the temporary supports, excavate the soil from around and under most of the footer, add a rebar grid (or cages) and build a plywood form, and then pour concrete. The hope is that the footer will support itself during this process with the "leg" at the lower end, and the unexcavated soil at the upper end.

Or should I simply remove the railroad ties and excavate the retained soil on the outside of the house, restoring the natural grade of the yard? I have considered replacing it with a deck on posts in this case.

Water flows in the direction of least resistance.

Moisture is either coming up from below (a rising water table) or its coming from the surrounding ground water in the saturated soil, or both.

If it comes up from a rising water table, it will enter the crawl space from below.

Either way the moisture enters the crawl space and it will need to be collected AND disposed. NEVER install perf pipe around your house and under your footings. This can cause settlement. Removing undisturbed soil to install drainrock and a perf pipe, it will cause settlement.

I think the best way to collect it is on the exterior side of the foundation wall in drainrock and a perf pipe laid 6”-8” below the interior crawl space dirt, but no lower than the bottom of the footing.

To keep the subsurface water from seeping through the wall, I recommend installing a moisture barrier on the exterior side of the foundation wall and install a 2” thick plastic mesh on the wall to allow water to flow down to the perf pipe. (Water flows in the direction of least resistance. You want water to flow down the wall not lay against the wall.) If dirt is allowed to be backfilled against the wall, the dirt could hold the moisture giving it a chance to seep through the wall.

Once collected it needs to be disposed by extending a solid pipe over an embankment, to your drain ditch or in a collection well and pumped away.

Doesn't matter how deep the footer is. It's about the water table. You could get a drill rig and redi-mix plant out there and make the footer 50' deeper using a secant cutoff wall. The water table wouldn't care, it would go under it.

The way you fix this is by lowering the local water table using French or Buckeye drains. Fortunately your property is on a grade, and you have the very, very convenient drainage ditch as an appropriate place to redirect the water without kicking the problem down to your neighbors.

So I would lay such drains around your house, setback (distant) enough from the house , that there's no risk of destabilizing your foundation, and what I mean by "set back" is far away from the house - e.g. if it's 4' deep make sure it doesn't get within 8' of the house. It doesn't help to hug the house, and risks undercutting the foundation, so there's no reason to do it. Given that reasonable setback, you can go as deep as your foundation footing or a bit deeper (depending on practicalities, you don't want it so low that drainage ditch water regularly backflows).

2
Damp Crawl Space
2
How can I prevent interior French Drain from further eroding soil under garage slab?
3
What is this rocky area in my crawl space wall?
0
Water seeping into a crawl space
5
Is this basement footer going to cause issues?
1
Can I divert my roof stormwater away from my storm drain and to a dirt patch 20 yards away