I have added a new amp + subwoofer to my system, everything (together with multiple other stuff like my pc, monitors,...) is connected to a single multi socket (switchable). Now whenever I turn it on it triggers my circuit breaker.

When switched on, the amp does stuff(?) before entering stand-by I guess this + the fact that I live in an old house using 1 circuit breaker for 4 rooms, causes it to trigger. If I use the amps power switch and turn it off before turning on the multi socket, switch on multi socket, wait for a few seconds, then tun on the amp on its own everything is fine, so it seems the initial current is to high with my new devices. (Sadly every 2 days I forget to do so...)

Is there anything I can do to solve this (circuit breaker = default B16)? Might a start-up current limiter (as used for e.g. saws and other big machines) work? Or do you know any ready-made solutions that fit in a socket. Cause start-up current limiter are expensive and most timed relais are made for turn off delay, I also thought about using a latching relay (this would basically solve my problem by preventing the amp from switching on, when switching on the multi socket => but I would favor somthing without me needing to press an extra button)

A B16 Circuit Breaker = Leitungsschutzschalter tolerates big insurge currents, f.e. 4 times 16A = 64A for 1 second. Maybe this circuit breaker is very old or had been damaged by a massive short in the past. A swap of that CB would be inexpensive, below 5 Euro for a new B16.

The most easiest idea would be to insert one or more power line extensions between the socket and the amplifier. That would increase the power line resistance.

If the electric installation is made for it, a C16 or even D16 would tolerate higher insurge currents, but is more expensive.

Another possibility is to add one or more insurge current NTCs in the amplifier's power wiring to decrease the high current, if it is an old amplifier without any. A newer amplifier's NTC(s) could be damaged.

They are normally black coin-shaped elements, see the photo taken from https://www.ametherm.com/ptc-thermistors-vs-ntc-thermistors-for-inrush-current 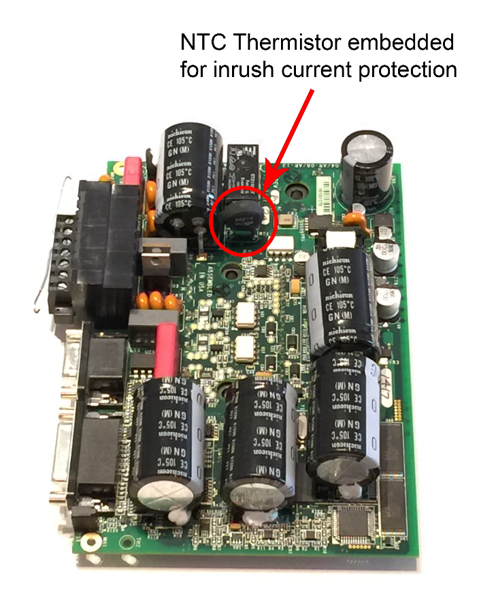 It is also possible that the amplifier has a special power switch with a resistor switched in series. When the switching operation starts this resistor will be bridged after a few miliseconds. But in that case there should be a hint in the manual that this unit should only be switched by the built-in power switch and not by a switch of an extension or a wall switch.

With inrush problems as you have the devices that allow motors to “soft start” won’t work here the transformer based systems vary the voltage and the Variable Frequency Drives VFD’s vary the frequency and voltage depending on the model. The best option would be to add another circuit. I have done this on many homes, pre 1950 this was very common, I try to split the circuit by where the loads are not just the number of receptacles in your case a single split or new circuit would probably solve the problem.

When I say split I mean to break the chain where 1 receptacle feeds another and take a new circuit to the receptacles that were separated from the original chain. I am in the US and our wiring methods may be different but I would do this or a new circuit with a receptacle where your multi outlet is and that would eliminate the inrush problem.