Why does my breaker trip when turning on lights on another circuit?

I'm trying to diagnose an issue that has cropped up in the last few days regarding a nuisance tripping breaker.

For background, I've lived in this apartment for 6 months now, with no notable changes to what's plugged in where that I can think of. This is a 2016 built building.

However, over the past three days I've had my breaker trip once every evening, usually when turning on a light switch on a completely different breaker. Here's a pic of the breaker. The manual I pulled up for this series of breakers suggests that an LED can indicate the last fault cause, but there's no illumination from the box, and instead I always get this orange trip flag: 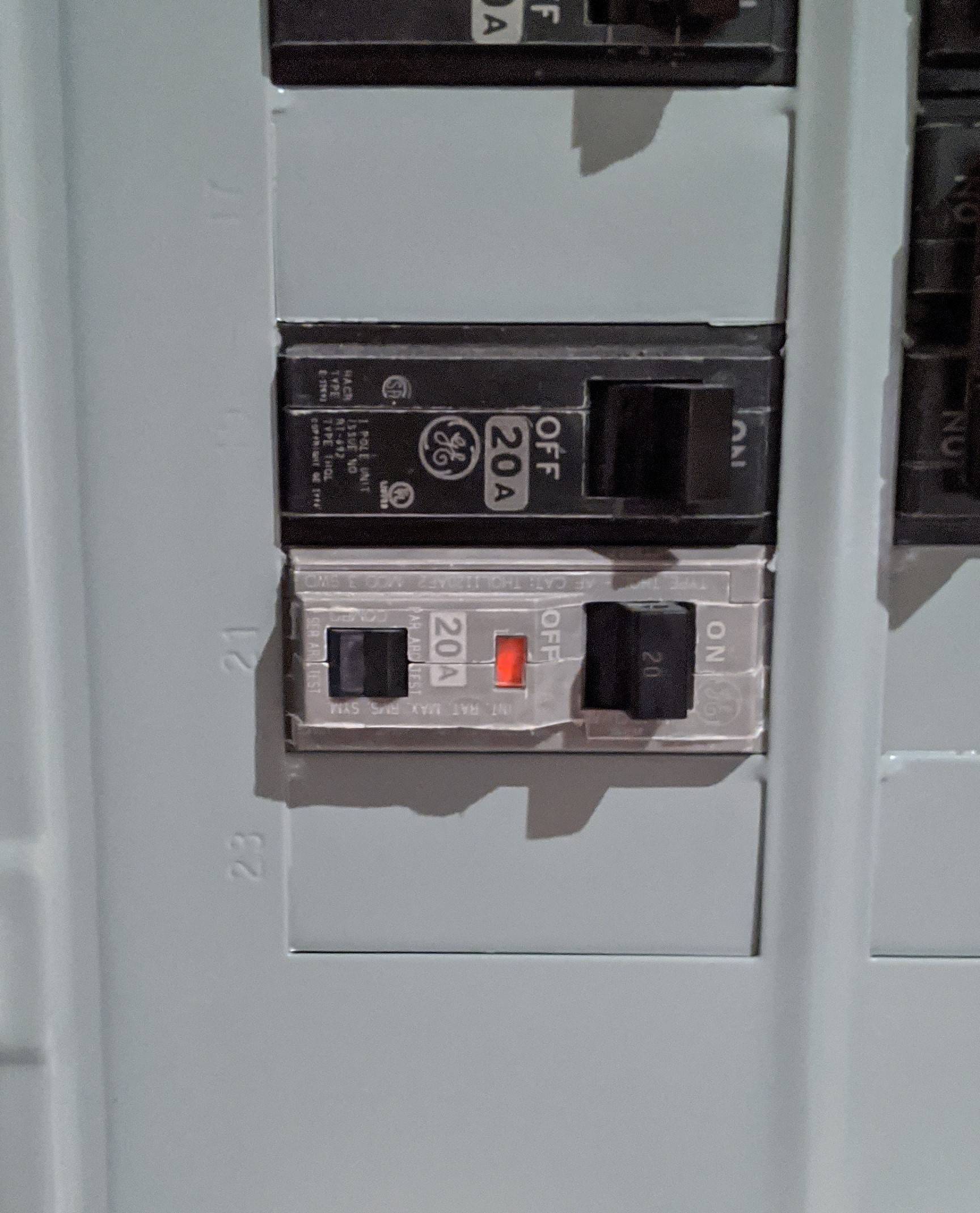 Now, we have a couple of clues here. This appears to be an AFCI, or maybe DFCI, breaker. The fact that this is tripping when a light switch is flipped on another breaker makes me think the neutrals are connected to each other somewhere. There's a lot of interesting stuff on the circuit that trips, like a server rack with a UPS and some LED lights. However, none of the equipment there has changed recently, and if I pull my UPS logs, I'm drawing about 400W at full load, or about 3A. There's other things not going through the UPS, like some monitors and laptop chargers, but this is a 20A breaker and should have plenty of overhead to draw multiple times that and still sit under the 16A-at-load rule of thumb.

At first, I was content to blame the fact that I have an awful CFL + dimmer switch setup installed in the living room (not by my choice), and the fact I had been using the dimmer recently. My reading into AFCI suggests that CFLs, dimmers, and crossed neutrals can have an effect like this.

However, today the breaker was tripped with these lights on max, which is a condition I've had them in for the last several months.

I'm scratching my head at this one, and since we're in shelter-in-place out in California, I'm puzzling over the next steps before I call my landlord.

Some questions overall: 1. Any guesses about why this would happen when turning on lights in the other room, on a different circuit? Is my AFCI + combined neutrals theory correct? 2. Any guesses about why this would happen now, but wouldn't have for the last 6 months? 3. Is the breaker indicating any sort of information about the fault cause, or am I left guessing whether this is AFCI, GFCI, or overload caused?

Appreciate any suggestions you may have!

Browse other questions tagged circuit-breaker afci or ask your own question.

4
Why is an AFCI tripping when a particular light on a different circuit is turned on?
2
What would cause an AFCI breaker to trip under no load?
7
Why does my microwave trip my AFCI only when it's mostly empty?
1
AFCI/GFCI Combo Breaker Trips Daily Under No Load
1
Why Does My Vacuum Trip My Circuit Breaker
1
Why do my new basement lights trip the breaker?
3
Why does my circuit breaker trip after everything in room is shut down?
3
Circuit breaker trips when ANY light switch on the circuit is turned on
2
Why is my circuit breaker occasionally tripping on its own, and then not tripping under the same load?
4
After some work in panel, GFI breakers for *other* circuits trip when well pump runs