I recently bought a house that has a subpanel in the garage served by a 50 amp circuit from the main breaker. The breaker has 4 wires coming in: red, black, green, white. Currently, the subpanel feeds a 30 amp and a 20 amp circuit Each served be a 3-wire connection where the third wire goes to green for one, white for the other. 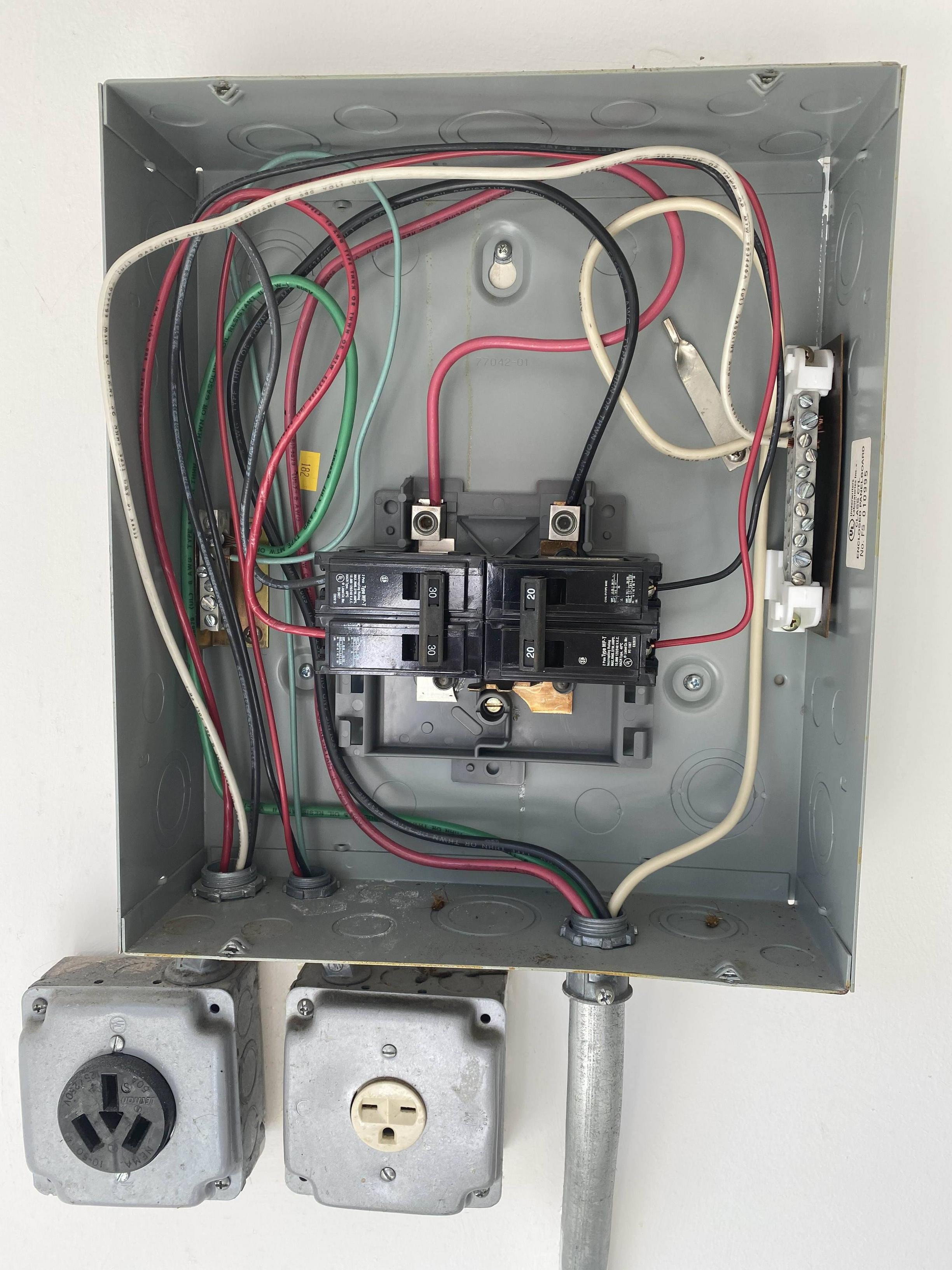 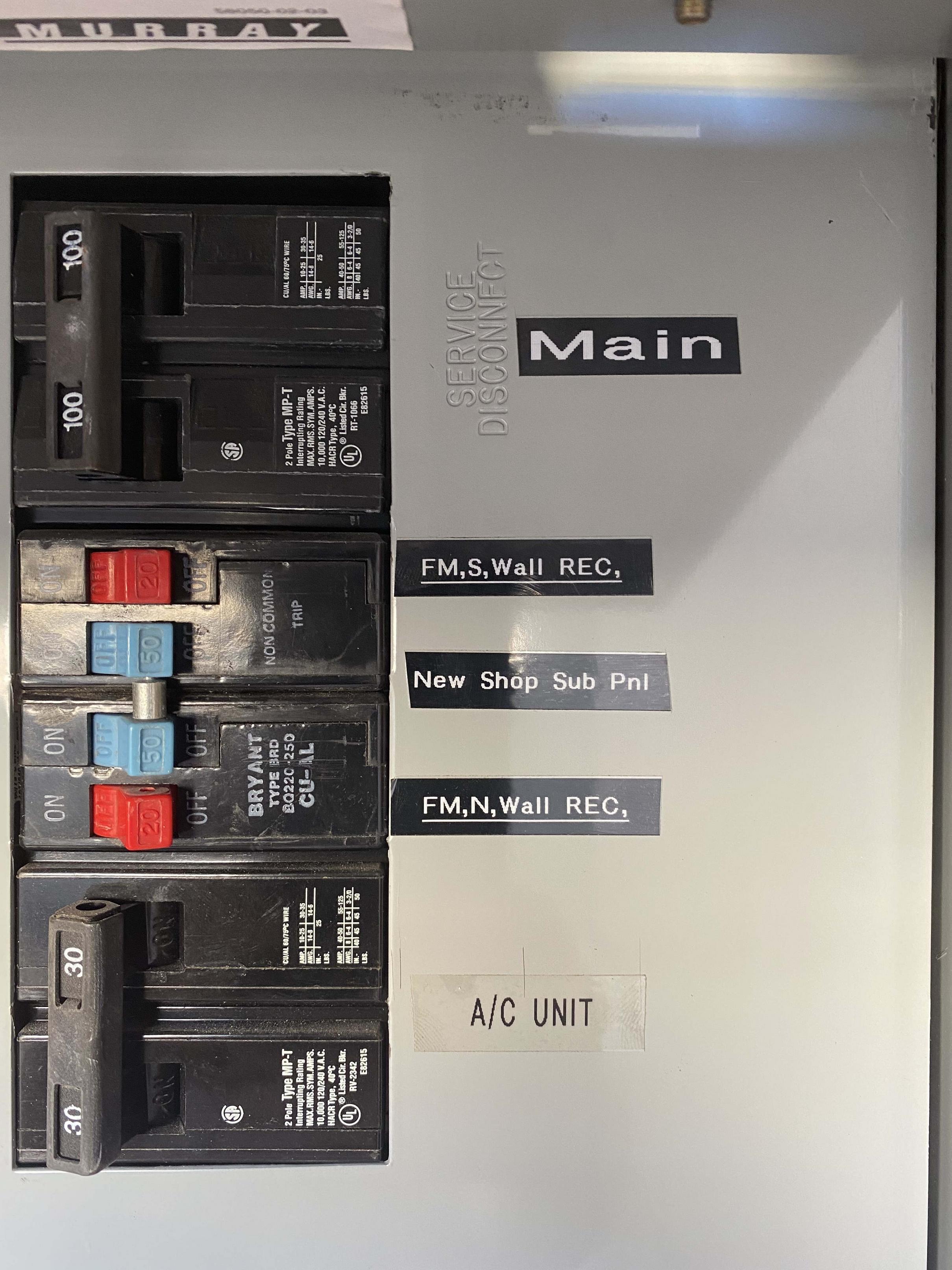 I want to rewire to install a NEMA 14-50 with a single 50 amp breaker in lieu of the 20 amp service (bottom right exit), and leave the second circuit unused. That would require a 4 wire connection, do I just use green and white? What about the second circuit? Disconnect it? Leave it in place?

I'm looking to connect an EV (Model 3) that draws under 45 amps. Based on the cerrowire application chart, 8 AWG would be sufficient? => https://www.cerrowire.com/products/resources/tables-calculators/applications-charts/

Did I forget to ask anything else I should?

Looking at your sub it was done correctly , the white neutral bond was not connected so you can connect the 14-50 , you will need to remove one of the double pole breakers and yes you use all 4 wires 2 from your new 50 amp breaker 1 ground and 1 neutral. , great question and good photos. Make sure to get the correct brand and type of breaker for the sub I can’t quite make out the brand but the main is a Murray , but the tandem breaker is Bryant this is something I have seen many times and usually not code compliant for 2 reasons , Bryant breakers were not listed for a Murray panel even though they fit. Item 2 is early panels were limited on the total number of spaces so manufacturers came up with “cheaters” early tandem breakers that did not have a rejection feature allowing the buss to be overloaded, these breakers usually have a sticker stating they are Non Current limiting. (Just want you to know). If you can find the proper double pole breaker for the sub all may be fine but I would want the main panel updated so there is not a problem if there is a fire later even though everything on the sub is correct there could be problems because of the alien breakers in the main.

The last person did a poor job.

You cannot keep the old left socket. If you have something that needs it, you'll need to change its plug to NEMA 14-50.

The highest priority is removing the left one. That should be smashed to bits. It's the obsolete/dangerous NEMA 10 type which provides neutral but not ground. Those were not legal to install at the time this one was installed; I cannot imagine what they were connecting it to. Further, it's a NEMA 10-50 type, and it's on a 30A breaker: the breaker must match the socket.

That is a NEMA 6-15 single receptacle on a 20A breaker. Remember? Socket sizes must match breaker sizes exactly. 15 is not 20.

So change it to a 15A breaker.

Or... there is an exception that allows 15A sockets on 20A circuits if there are 2 or more sockets. They make a "duplex" 6-15 recep, it looks exactly like a normal recep except it's saying "Nope". Just get a domed cover for a duplex recep (very common, under $2) and you can fit a duplex 6-15.

Check that this panel actually is a Siemens/Murray

Change that red and blue breaker to a Siemens

That blue/red breaker is a BRyant breaker. It does not belong in a Siemens/Murray panel. It is unsafe and you have a good chance of burning up the bus stabs, because the stabs don't fit properly and they'll arc under heavy load. You need the Murray equivalent of that thing, called a Murray MP25020. (under $30).

Get much bigger subpanels

You have a main panel and at least 2 subpanels in that house - I know that tiny 12-space "main" can't be the only other panel in the house. All of them are amazingly overstuffed or just way too small. I would not disturb the actual main panel. But definitely change out the subpanels to much larger units. Spaces are cheap. Having to wrestle with problems because you're out of spaces is expensive.

2
Completing a prior subpanel install
0
How to connect a 230V jointer to a pre 1996 dryer circuit?
4
How can I get 30 Amps @120V using several 12AWG and/or 14AWG cables?
1
Wiring Options for 14/3 NM-B Cable and Two Single Pole 15 Amp Circuit Breakers
3
Running 240v power to detached garage for electric vehicle
1
Please clarify wiring to and for remote pool load center
1
Can I use 12awg ground from main panel to subpanel?
0
Add 240V to Garage through New Sub-Panel
3
adding new circuit to generator subpanel without a ground bar