I have a waffle iron that trips the RCD breaker (the rightmost breaker inside the red box below) after I've made a couple of waffles.

I'm fairly sure that I don't have a problem with the kitchen wiring, because I can run a kettle that's rated at 3000W, and that doesn't trip the RCD breaker, nor the kitchen sockets breaker (inner red box below). The waffle iron claims to draw 750-1000W.

Except that the toaster started also tripping that same RCD breaker if we use the two right-hand bread slots. I'm hoping it was a coincidence.

I'm in the UK. The kitchen sockets are on a 32A breaker. The oven is on its own 40A breaker.

Note that when I say "trips" I mean it actually trips out half of the house (the 63A RCD inside the red box at the right), which I'm hoping is caused by the aggregate load on that half of the consumer unit.

Here's a close-up of the breaker and RCD: 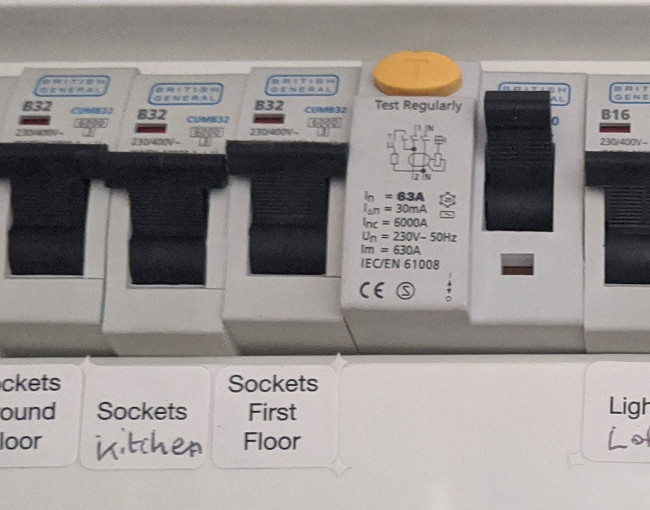 So: how can I figure out whether the waffle iron and the toaster are faulty? If they are, this will obviously be cheaper and more convenient to resolve than calling out an electrician.

If it is a 30mA RCD and there is a strict separation of Neutral and Protection Earth downstream of the RCD there could still be a problem with the wiring resp. with other electric devices that are connected to the same RCD.

A bubble search should disclose more infos, i.e. disconnecting /switching off half of all devices/appliances that are connected to that RCD iteratively. If there are breakers downstream of the RCD, same procedure would help.

The wafer iron or toaster serve as sensitivity booster, one or both should be switched on during the test.

This issue is often a multiple problem. The RCD does not trip below 30mA, but 25mA are still too much leakage current. In these cases here this might be a sort of "team work" of more appliances and/or the wiring/panels to get this high level. Moisture, condensation, dust, overheated isolation, detergent etc. can produce leakage current in not well ventilated installations, in wirings of walls with damaged roofs, in washing and dish washing machines and elsewhere.

Of course a direct measurement of the current would help, via clamp meter, but here it is supposed to be not available. A digital multimeter DMM could also measure the variable leakage/ground current, but the PE would have to be opened near the Ground/Earth bar which could be more difficult and inconvenient.

Last but not least if there had been a shortcut somewhere downstream of the RCD sometimes in the past, i.e. a circuit breaker tripped for high load, the RCD could have been damaged.

If a DMM reads only some kilo-Ohm, there surely is a problem with the device.

But if the measured resistance is very high, e.g. Mega-Ohms or even infinite, this is NOT an indication of a good device.

The reason is the fact that insulation resistances can be non-linear, i.e they seem to be fine with the low voltage measurement via a DMM (mostly not more then 9 Volt from a battery), but could be much less with the line voltage of 120V or 230V.

6
How is it possible to get an electric shock even with mains power off?
1
ring main/RCD max amps - confused (UK)
1
Is my RCD Breaker faulty?
2
How do I fix my seemingly improperly ground outdoor lighting circuit that trips my RCD when it rains?
0
How to extend wiring for extra high current sockets/appliances in Utility room
1
half power and no hot water
1
Do I need to install a local ground point for a secondary consumer unit in my shed?
1
Identifying function of electrical fittings
0
Adding sockets to a ring circuit in the UK