First post here! We bought this old (1925) house late last year and have been fixing things up. Went to swap out a ceiling fixture in our finished attic bedroom, flipped on the breaker, and despite even the wall switch being "off," my wife screamed that sparks were flying out of the J-box!

I'm not electrician (obviously) but I swear I just replicated how the previous fixture was wired. The box has two old knob & tube wires (one with a black sleeve, one with a tan sleeve), and what looks like conduit with the standard black, white, and green wires. I connected the k&t black/conduit black/fixture black together, the k&t tan/conduit white/fixture white together, and so on.

After realizing what happened, I checked the damage. The conduit black/hot wire apparently snapped in half inside the box. I'm not sure if I damaged it somehow when moving the wires back into the box before putting up the fixture, or if it's possible it snapped from the energy release?

What am I doing wrong? I've put in a call to an electrician to come help us out here, but I'm still curious in the meantime. Pic attached. 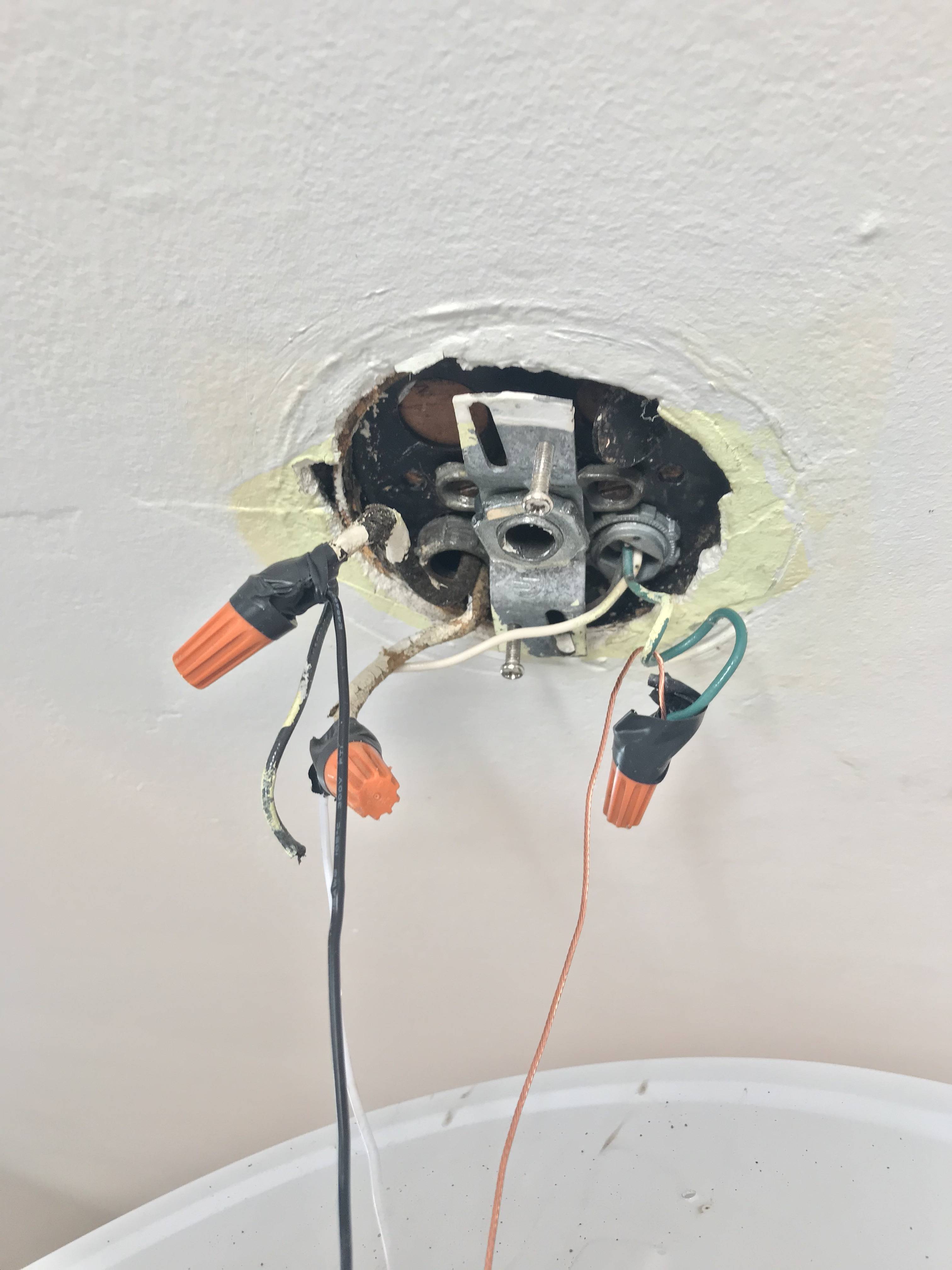 First, there are (were) 4 non-ground wires: black and white from each of conduit and K&T. The lamp only takes 2 wires. The other 2 wires had been previously connected to each other, and you obviously disturbed that. If there are 2 controlled fixtures on this switch I may be barking up the wrong tree here. But what usually blindsides novices is thinking wires are color coded for their convenience, and white-white, black-black and done. Color coding is complete gibberish. (at least until you deal with it long enough to get the hustle and flow of it, and even then, inconsistencies abound).

In most junction boxes, you need information as to what each cable does. This data is only stored in how the wires are interconnected. There is no other repository of that knowledge. The knowledge can be re-generated by a skilled person with test equipment, but the classic novice error is accidentally destroying that information by hastily dismantling stuff.

The next thing I see is tape on wire nuts. That is the hallmark of bad wire-nutting, which will certainly create sparks! Novices put tape on wire-nuts to cover one of two blunders:

The problem here, though...

I think you actually have two pieces of good news here. Wires don't just snap off by themselves; this wire suffered extreme stress. This solid wire failed right at the conduit fitting. It was yanked, by someone dangling the fixture from the wire, and that nicked the insulation.

Good news #1 is it was the hot wire, which means we got to detect it (if it was neutral, we would've never known; and neutral might be nicked too).

An electrician should make short work of this, and hopefully will use modern THHN which has a tough nylon outer jacket which probably would have prevented this, instead of the obsolete THW which does not.

It also looks to me like this Knob&Tube is perfectly fine. The electrician may try to upsell you into a K&T-ectomy, replacing this K&T switch run or all the K&T in the house "for safety". Believe me, he'll hit you with the full ooga-booga treatment, "very scary!" Don't buy it for a minute. What will actually get you better safety is AFCI breakers ($40) on all circuits which have K&T. AFCI trips on any sort of arcing, which is the failure we worry about with K&T. But AFCI also trips on every other kind of arcing, so the win goes far beyond K&T.

You can kinda forgive the electrician for being all "replace all the K&T", because that was the only upgrade path until AFCIs came along. Old habits die hard.

Also, you in particular are allowed to use $20 AFCI receptacles. They only protect the circuit downline (past) the receptacle, so they would have to be in the right place. If AFCIs were mandatory, they would not be allowed.

So don't waste your money prophylactically changing out K&T wires. Fit AFCIs instead and call it good.

Glad you called an electrical. This is not advice on what to do.
As others have noted in other posts, it is a good idea to take a picture of how the fixture was wired before breaking apart the connections.

To answer your question on what might have gone wrong. This is my guess as to what went wrong. I am assuming this is a switched ceiling light controlled by a switch. One of the pair of wires is going to the switch, which means both are hot and the white wire returning from the switch should have been ReID and marked with black tape or other markers. The Feed black should be connected to the switch black only and not to the light. The return white from the switch ( is really a black) would connect to the fixture Black.

By connecting black to black and white to white (one of the white is an unmarked black), you short-circuited the wiring.
The switched white, might have been marked with black tape, but you removed the tape to look cleaner not realizing the tape purpose as a marker.
If neither of the set of wires is a switch leg and the switch was on the lighting fixture, then it could have been a cut in the insulation on the black conduit wire. We can't see the end of the black conduit wire as it is hidden from view by the mounting bar. I can see a break in the green insulation at the point where it exits the conduit.
On another note, you have a knockout tab protruding into the box which is unsafe. The open knockout is also unsafe.

Not the answer you're looking for? Browse other questions tagged electrical wiring knob-and-tube or ask your own question.