My apartment (top floor) has runs of 3/4" (-ish) pex-like tubing (photo attached, Switzerland if it's relevant) running from a central point. One such tube carries an existing coaxial cable (landlord provided, I do not want to detach) from a satellite splitter in my apartment to the roof, where, together with a large number of other such cables it emerges through a (non-removable) metal pipe about 4" in diameter with a 180 degree turn on.

My corona-virus challenge is:

EDIT: The pex-like tubing is not split (it's solid all the way around).

EDIT: I think I've now gained access to where the pex-like tubes end in the roof void. If I'm correct the cables emerge from many tubes, and are then cable-tied together to a cable frame in the open and go through what looks like some plastered gauze into a roof void, presumably into a pipe the opening of which must be about 15" above the gauze. So there are now two separate tasks: getting the cable up the pex tube (or down it having identified it), and getting it through the gauze and up the pipe (or the other way).

How would you approach the above? 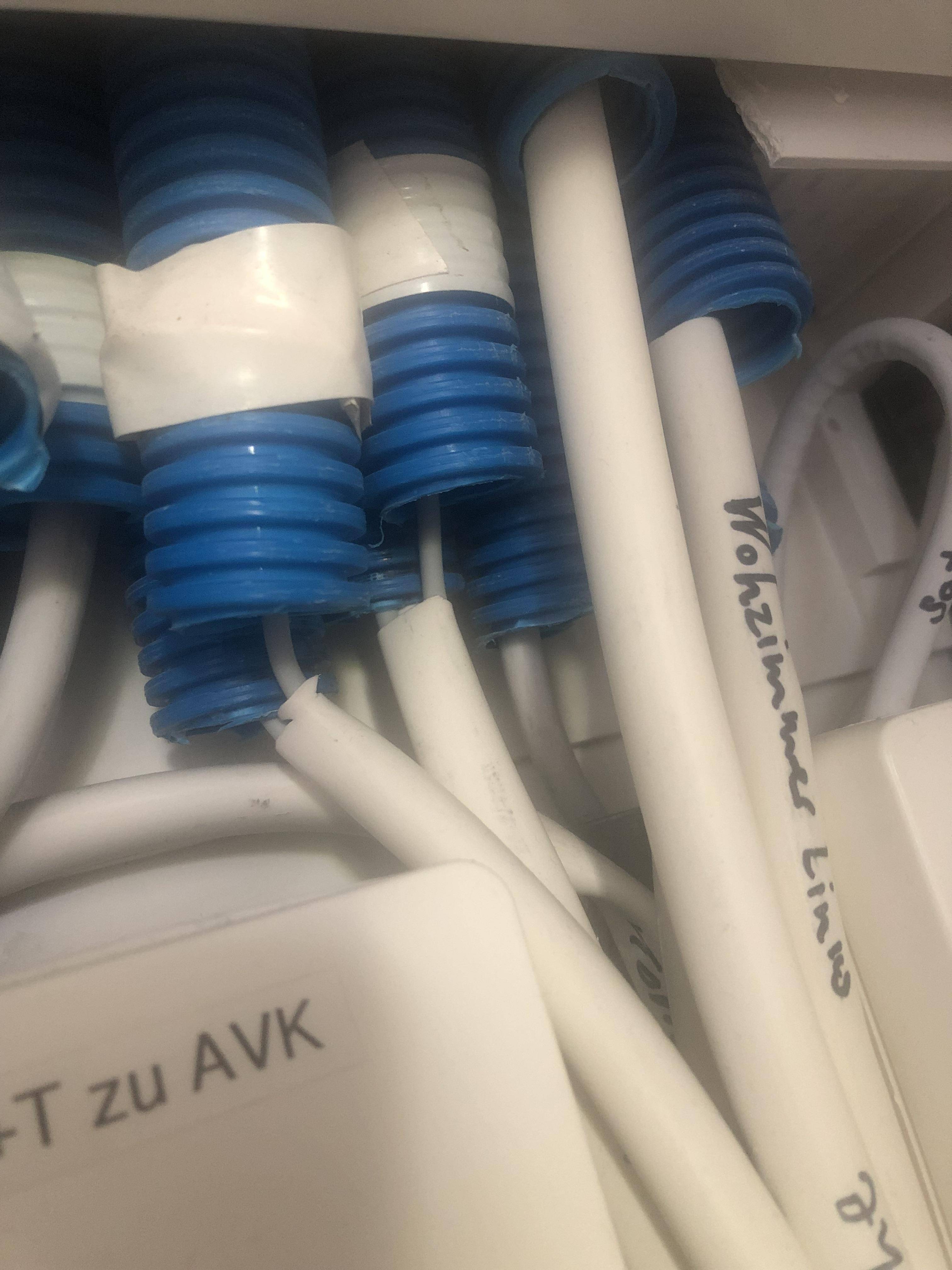 I agree with Solar Mike that a vacuum may work to pull a string, If the smurf tube or flexible nonmetallic conduit is 1 piece. The nickname is from a kids carton where the characters are blue.

Having 9 or more flex lines going through a 4” makes me think this would not be 1 piece or the flex ends at the 4”, so you will need to try a fish tape.

A fish tape is a reel of steel or plastic that is used to push through a conduit, connect a wire and pull the wire back. The only problem(s) may be if the conduits stop prior to the 4” and the tape doesn’t go into the large pipe. The second possible problem is the 180 degree turn; depending on how tight this turn is, it may be tough getting a fish tape through depending on how far from the 4” pipe the flex conduits end.

If the smurf tube exits the 4” connect a vacuum and suck a string thru the tube a little plastic like a bit of bread wrapper on the end of the string helps the vacuum work. Fish tapes come in different lengths from 25’ to 250’, it will need to be as long as the length of the conduit.
Just finished and saw your edit I think a tape or combination of tape and string are the paths forward.

This is ENT (corrugated PVC), not anything like PEX

What you're looking at is most likely ENT (Electrical Nonmetallic Tubing, aka "smurf tube"), not any sort of tubing/pipe intended for plumbing work. Running a Cat6 cable through this should be not an issue at all, provided you stay within the fill limits of the ENT you are using. As Ed Beal mentions, you'll likely need to use a fish tape to pull either the cable itself, or a pulling string, through the conduit.

You will need to check carefully regarding the tubing. There is evidence that this tubing is the style that has a cut all along one side from end to end. 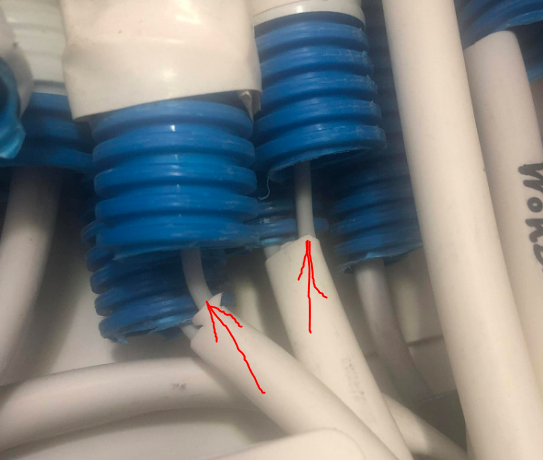 Tubing like this that has a split is designed to be used where the cable can be inserted into the tubing without having to thread it in all from one end. Such tubing is primarily used to protect the cable.

If the tubes are indeed the split type you are very likely going to have much difficulty trying to pull an additional cable through the tube without it spilling out of the slit as it goes around a corner.

I have and use rigid fibreglass poles- they can be threaded together and 'pushed up the stack. You'll need some sort of cone on the top to let it bounce out and around things, and if it bends tight it won't work at all.

Best way would be to disconnect the coax, time 3 strings and a new line to it, pull them all through, then pull the coax back in. Assuming it bends and turns a lot.

Not the answer you're looking for? Browse other questions tagged pex cables cable-management or ask your own question.

14
Best way to keep a PEX run in an attic (above a foyer) from freezing?
1
Multiple Loose-Hanging Wires in Finished Wall
0
Why is my clear pex tubing turning red/brown?
1
What is the best practice for grounding a shielded cat 7 ethernet cable?
1
Ethernet routing, through-wall conduits
8
Is putting a pex tube underground and then through a concrete slab OK?
1
How to open/unlock the BMA 2215 cable box for connecting a ceiling lamp?
3
Can I pull ethernet cable through 1/2" pex?