Mounting a TV above a fireplace

So, we have a 65" TV that we are thinking about mounting above our fireplace. The fireplace is made of brick and has a wooden mantel. Is it really a bad idea to mount the TV above the fireplace? I mean obviously I know that heat doesn't do anything good for electronics but we would, at most, have gas logs in the fireplace. I just wasn't sure just how bad an idea it was. Thanks.

It is a bad idea. TV screens are designed to be viewed basically level from your eyes as you sit in your TV room. If you mount it above the mantel you will forever looking up to see the thing.

The heat thing is also a concern for electronics as you have mentioned. Raise the temperature some and in the best case you will age certain components and shorten the life of the TV.

You would also have to deal with the disfiguring of the brick face of the fireplace when you find that it is a less then optimal place for a TV and decide to take it down.

I fail to see why this is such a fad idea to put TV's up high on the wall.

It may not be desired, but sometimes it's the only available wall space in the room. FYI, we mounted our 55" above the fireplace. But the fireplace was converted to propane at the same time. I was able to attach it to some paneling that was used to build the fireplace surround, after appropriate reinforcing.

Here's a picture of it completed. Note that we have not had a problem with the viewing angle. 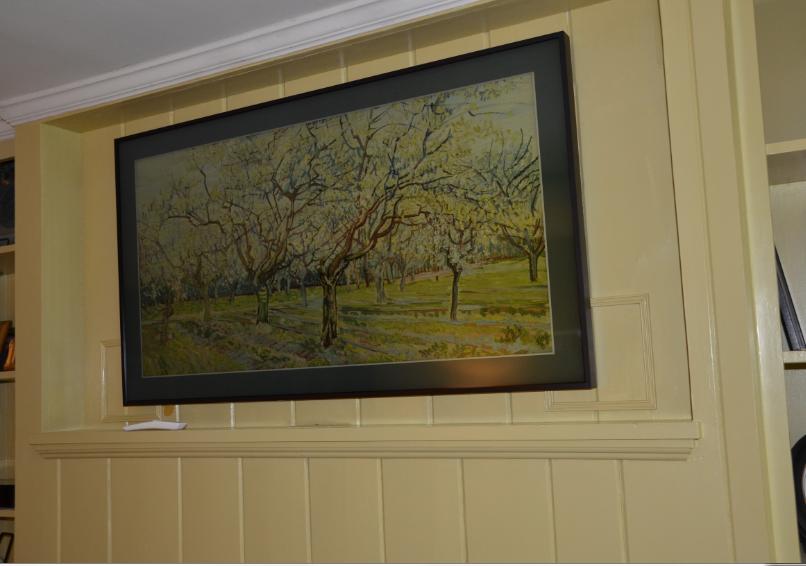 I'm sure having the set recessed helps with the heat. Samsung had all sorts of info in the mounting instructions as to when being above a fireplace would be an issue.

No, I haven't noticed much heat, if any, at the surface of the TV.

The two small panels on either side of the TV were the heatilator (?) outputs. Fireplace itself is steel/iron plate. So there's a cavity between the steel and the brick. Intake vent on the bottom and exhaust at the top on both sides. Strictly convection, no forced air (fan), so never got much heat out. The one on the right hides the shutoff valve for the propane log insert. The one on the left I used to route the FO cable from the box (which is on one of the shelves just to the left) to the TV.

The flat panel TV doesn't put out much heat at all, as all the processing and intelligence is in the (hidden) box.

2) The type of chairs being used. I have lounge type sofa that reclines, and having the tv up high is an advantage. You should sit in the area where you plan to watch the tv and see if the height is appropriate for good viewing.

3) As others have stated, is there a heat issue that can cause problems. Turn on the gas log, and check the temperature where you would mount the tv and see if there is a significant heat in that area.

If the viewing angle and heat is not an issue, if you do go this way, select a mounting system that allows you to tilt and rotate the screen toward the sitting area, so the screen is directed straight to the eye.

Not the answer you're looking for? Browse other questions tagged fireplace brick television or ask your own question.

11
How can I prevent the mantel above a gas fireplace from getting hot?
1
Electrical for built-ins and fireplace insert
1
How hot is too hot above fireplace
0
changings gas logs fireplace to insert
0
Gas fireplace, “log” placement, and flame flare up
1
Wiring between chimeny and brick facade
2
How to build a mantel on rough stone fireplace