Should I put in a sub-panel to add breakers to an older home?

I’m renovating my kitchen in a century home. It has already been updated with newer wire, but many shortcuts had been taken by the previous owner. I plan to replace the old wire throughout and add the many missing outlets required by code (that were not added by prior owner). The main breaker panel is pretty much full and in a difficult place from which to run new circuits.

I’m thinking of running a feeder circuit to a new panel that would be closer to the kitchen. I have full access to the kitchen from the basement below it.

What are your thoughts on this? Are there any hidden considerations when doing this?

Thanks for your input.

Sorry about that. Additional information:

The main panel is 220, so relatively new. The kitchen is 20’x15’. It only has 6 outlets, one light and one oven outlet. I plan on putting in an island with multiple outlets, pot lights and the number of required outlets to meet code. I will also be relocating the location of the oven, so that will need rerouting. I have two slots open and would expect to have at least another when the existing one for the kitchen would be replaced with the new panel. 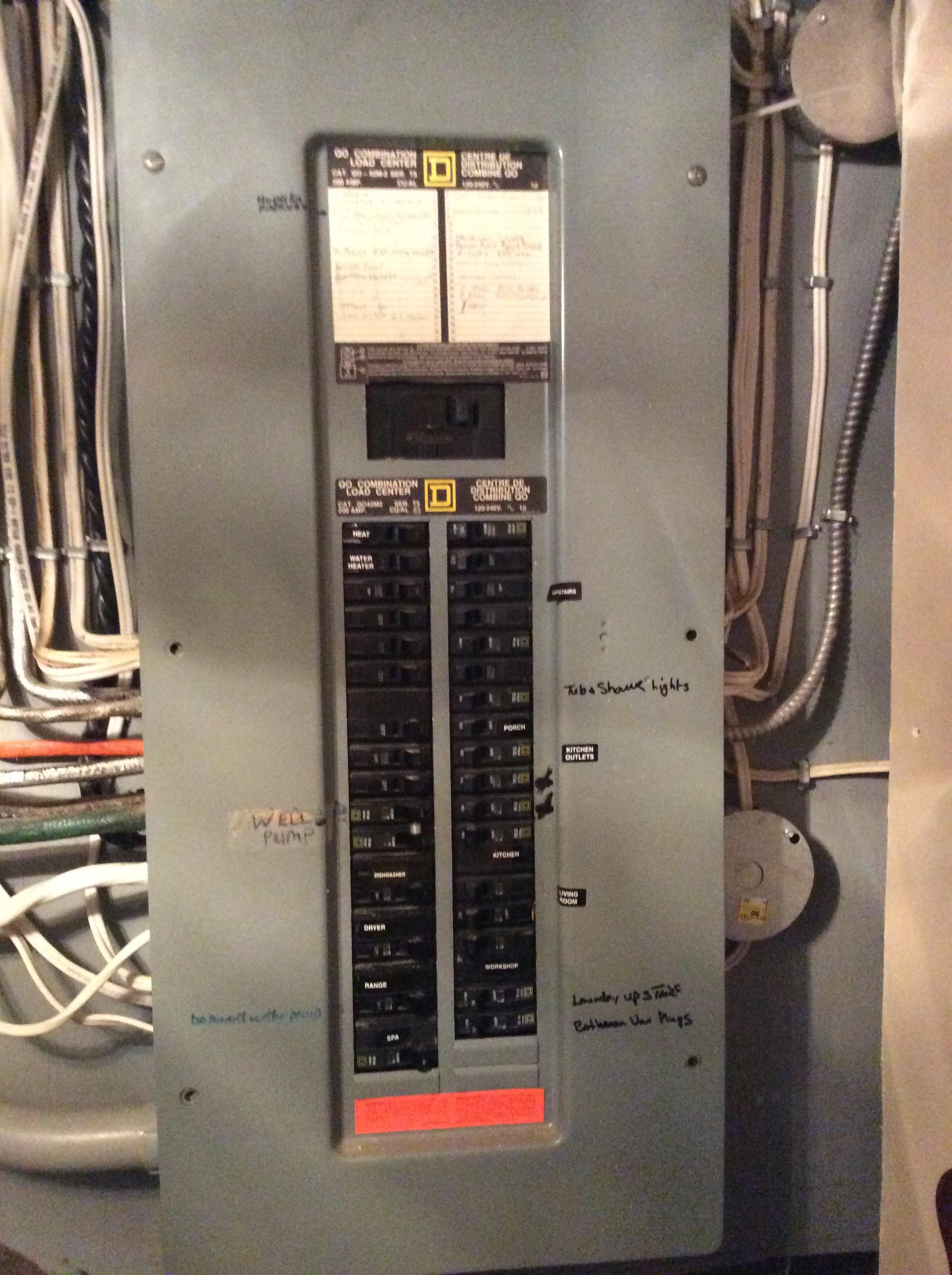 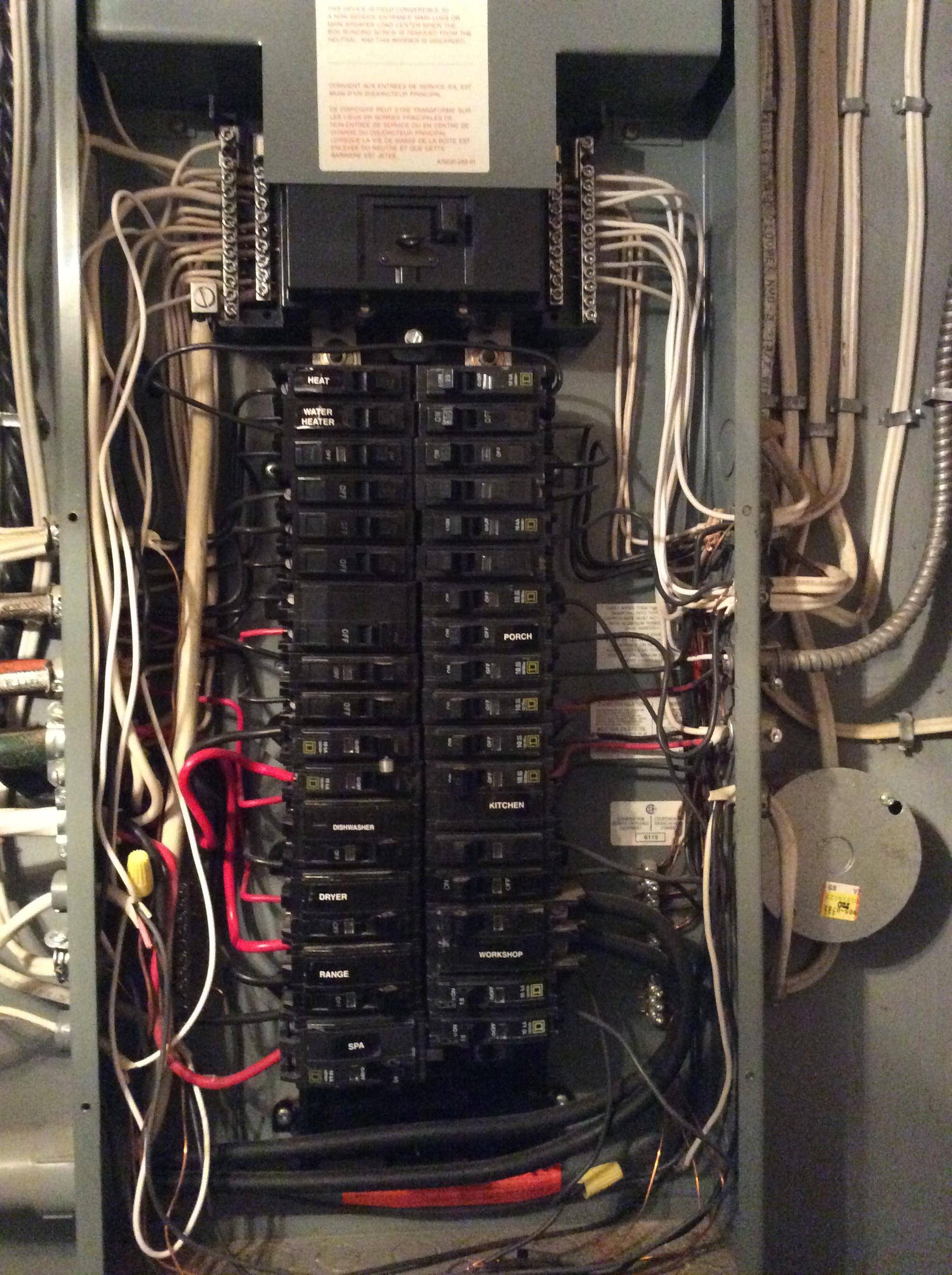 I generally like to avoid replacing main panels outright, because it's a big job that is not DIY friendly and starts a slippery slide of red tape. You need the power turned off. The PoCo won't turn back on without inspector sign-off. The city wants 10 other things added to project scope. With all the rigmarole it'll be a week, mostly waiting on others. The city won't let you live there with no power for a week. They'll insist on a temporary AC power drop and porta-johns. A subpanel has a much smaller scope by nature.

Since you are remodeling your kitchen, you cannot rely on just the circuits that are there (so many people think that, it's amazing!) You will need to go full NEC 2017 rigmarole which calls for at least 8 spaces - more if you like the chef! Mandatory is typically 2 countertop circuits, dishwasher and disposal, range (2-pole), microwave and (optional, but you really want this!) refrigerator on non-GFCI. However the chef would very much appreciate 1 circuit per receptacle. Unfortunately the way kitchen appliances are sized, you can't use 2 on the same circuit without a breaker trip. One per recep works the best.

My rules of thumb

If I'm starting anew, I want a 42-space panel. Why not more? Because of panel pricing: adding extra spaces is dirt cheap up til 42, then it goes ballistic. (that's because the old pre-2014 rules were "only 42 spaces allowed" and the market hasn't caught up yet.)

Now if I have a house with a panel already, and it's a competent modern panel, then my viewpoint is "add a subpanel". At that point I will want 45-55 spaces between the old panel and the new one. A "space" is what a twin breaker takes up. After all, you will have 2-6 spaces used up by the breakers that connect the panels. So if you currently have a 16 space, I'll add a 30. A 24, I'll add a 24. Etc.

My brand priorities are: if you plan a generator, then a Siemens main-lug panel. Otherwise a panel in the same lineage as your existing panel (i.e. Siemens for Murray, Eaton BR for Challenger) so it'll use the same breakers... unless it's Square D QO, then give a hard think if you really want to keep spending 50% extra for your breakers. (It's a fantastic panel but pricey).

Double-stuff breakers. Plan to never use them. If the existing panel is full of em, you want enough new spaces to let them all be singles. You can't use them because AFCI and GFCI breakers require a full space, they are mandatory in some cases, and are smart in any case. There are also some "trick" breakers that take a full space.*

Extra spaces are your best friend. I get very nervous in a house with only 6 spare spaces. Many modern conveniences gobble up spaces 2 at a time. You don't want to have that conversation "No, you can't have a whole-house surge/tanning bed/generator/EVSE because there's no space in the panel". I like to finish a subpanel job with 50% of spaces free.

A couple things to watch out for.

Look at your original panel for something called "Thru lugs". These are extra lugs typically on the bottom (surely on the opposite of the main breaker) which allow you to attach wires directly to the main bus. (and switched on/off by the main breaker). This is for extending to subpanels, so use 'em if you got 'em! The wire must be sized for the main breaker.

FPE and Zinsco panels are dangerous firestarters; the problem is the breakers don't trip and the bus stabs start fires. The main breakers are often alright, so if they have thru-lugs you may be able to use them and simply move all the circuits to a subpanel next to this panel. You cannot use a subpanel in the normal way (with a feed breaker) because competent FPE and Zinsco breakers are not available at any price; the new ones are worse than the dangerous originals!

If your panel is Pushmatic, and it has thru-lugs, you're all set. Original/legacy Pushmatic breakers and buses are fine. But like FPE/Zinsco, you cannot obtain competent new breakers at any price: the ones currently in stores are worse than the FPE/Zinscos! But you know, Pushmatic uses bolted bus "stabs" (certainly the safest type) so getting a subfeed lug kit may be possible: an adapter that takes you from a bolted stab to a lug.

The "Rule of Six" aka "Split-Bus" panel. This is a panel that has an area of 4-12 spaces marked "Main Breakers" plural. One of the "main breakers" feeds the rest of the panel. In this case, put a subpanel right next to this panel, and at your leisure, move circuits to this new panel. The endgame goal being to have exactly one breaker in the "Main Breakers" area, which feeds the sub. Now it's a "Rule of One" panel lol, which removes the safety issue relating to Rule of Six.

* At a "Maker" show I saw a product that warns you if you left your oven on. Raspberry pi, clamp-on CT, and it pushes a notification to your phone. I said "The app needs a button to trip the breaker remotely." They were stunned at the idea. I said "Have an electrician replace the oven breaker with a shunt-trip breaker. Signal that with a 24 volt pulse, and SNAP!" A great example of one you can't get in double-stuff.

You should have no issue adding a subpanel to this panel

Your existing panel is a Square-D QO (and a rather large one as well, at 42 spaces). This panel type is still made to this day, with relatively few design changes, so you will have no trouble finding the correct feeder breaker (a QO2125 with a LK125AN for the neutral and a LK70AN for the ground) to install here (there are two free spaces on the right side of your existing panel, just above the orange tape, which should be replaced with the correct QO filler plates or dummy breakers while you are at it). I would then run 1/0-1/0-1/0-2 Al SER from this existing panel to the new panel location, which is a sufficient cable for a full 125A feeder to your new panel.

If you wish to go larger, you can do that by moving the bottom rightmost breaker to the left side, and fitting a QO2200 breaker in the bottom right position, along with a LK225AN neutral lug and a LK125AN ground lug. This leaves you with only one space to occupy with a filler plate or dummy breaker as the QO2200 takes up four adjacent spaces in your panel, and means you can run a 4/0-4/0-4/0-2/0 Al SER cable, which gives you the full 200A your service can provide at your new panel location.

With this, due to the fact your existing 42-space panel is almost full already (!), I would install a 40-space, 200A, main lug subpanel as a minimum here; if you wish to stick with QO, this would be a OQ140L200PGC. If you're willing to spend an extra $50-$70 on this project, you can get a 54-space, 225A, main lug panel instead, namely the OQ154L225PGC. These panels both come with factory-fitted ground bars; just make sure there is no green bonding screw fitted to the new subpanel, keep the grounds on the ground bar and the neutrals on the neutral bar, and you're good to go with respect to grounding.

Now that you've added the main panel information and it's in great shape load and manufacturer wise, the sub panel is definitely the way to go. Harper and ThreePhase have added all there is to add so good luck and stay safe out there.

Not the answer you're looking for? Browse other questions tagged electrical electrical-panel kitchens or ask your own question.

31
What is a tandem breaker (aka duplex, cheater, twin, double-stuff, etc.)?

2
Can I move the electric breaker panel a little, and put in smaller closet?
7
Rewiring house and replacing breaker panel. Wiring layout and breaker selections
1
Can a breaker be added to the main disconnect panel?
1
Does code mandate outlets when windows are above the counter?
1
How do I add 2 AFCI circuits to my panel?
3
Max load on a 30Amp Sub Panel
3
Do we need a electrical sub-panel?
0
Re-Wiring to add new main panel and make existing panel a sub
1
Sub Panel selection/configuration
0
My breaker panel is full but I need to add at least 3 double pole 30 amp breakers. Will I exceed my service line rating?