I am putting in the electrical runs for my home shop and got some l15-30r (3-phase 240v receptacles) because I want to run 30 amp 3 phase circuits for the maximum size machine possible. All of my three phase machines are 20 amp, so l15-20p. I got some l15-30r receptacles. They are incompatible!!! Whoda thunk it. I assumed that it would be possible to plug a 20 amp (l15-20p) into a 30 amp receptacle, since that has more than enough current capacity. I would prefer not to downgrade the runs to 20 amps. The other solution is to lop off the l15-20p connectors to put l15-30p connectors on. This should be perfectly safe, since the machine will not draw that many amps. Would that violate the NEC or common sense?

Don't be fooled by the downward compatibility of 20A receps to take 15A plugs. That is a special exception in Code. In all other cases, socket size must exactly match breaker size. 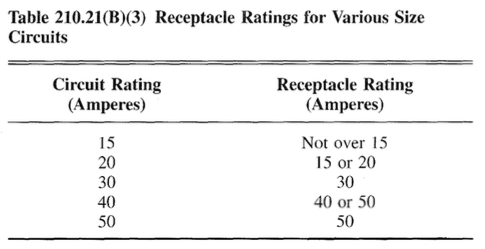 To run through the table quickly: the 15A exception supports ancient sockets. The 20A exception is to allow dirt-common NEMA 5-15 receps (plural) on 20A circuits, because that's only 33% over socket size and the benefit is obvious! The 40A exception is because 40A sockets are not made. But other than that, the socket size must exactly match the breaker.

What's the rationale? Consider what happened if you fed a string of 15A sockets with a 60A breaker. That seems clever. But consider the 15A appliance that is in trouble. It's internally shorting, but the resistance of its power cord is preventing more than 60A from flowing (it has melted off its insulation and is glowing cherry red). The breaker utterly fails to prevent the fire. An extreme example, but that's the concept. 15-20A is considered close enough (33% more) but 20-30A is 50% more and a great deal more power in an absolute sense. Code is written in blood and ash: rules get in the book by patterns emerging in fire inspection reports.

That is why sockets are keyed to be incompatible. (except 15-20A).

Believe me, we all know the pain of buying the wrong thing out of inexperience. So you just have to eat the loss and learn the lesson! "Harper's Rule: Buy the wire last" could probably be expanded to "learn, then buy".

The exception. There is a rule that allows up-breakering certain motor loads that whose nameplate has certain numbers, and have a history of tripping the correct sized breaker. Circuits dedicated to such tools can up-breaker (without even upsizing the wire, although upsizing wire is always allowed). If you fall into that exception, you could be good to go. That is to say, if your tool qualifies for the exception I'm fine with the idea of putting a -30 plug on it and simply using it on a normal 30A circuit.

The recovery. As a general rule, you should not be plugging appliances normally intended for 20A circuits into 30A circuits. If you wired your shop based on that misconception, the easiest face-saver is to slap a subpanel on the 30A feed and 15-20A breakers in the sub. Remember neutral and ground must be rigorously separated in a sub, so if the cable has no neutral, you can't support 120V anything in the sub.

Edit: To embellish on a subpanel. A subpanel is just a mini-main panel. If it's in the same building it does not need a main breaker. You then can support any number of circuits up to 30A - and yes, you can have one or more 30A breakers inside a panel fed by a 30A feed breaker! Classic example is expanding a 4-wire dryer feed to also support an EVSE; that's exactly how you do that. I would fit one 30A and one 20A breaker to feed my 30A downline and 15/20A downline.

You can use any fit 3-phase panel such as Eaton CH, Eaton BR or Siemens. In a subpanel, neutral and ground must be rigidly separate and you must remove the neutral-ground equipotential bond. If you're wiring for NEMA 15 I gather you are not bringing neutral; if so I strongly recommend getting an accessory ground bar and making a show of not using the neutral bar for anything at all. So it is obvious to "the next guy" that neutral does not exist in this panel and ground should not be misused for that purpose.

240V 3-phase can vary with center grounding, wild-leg grounding or corner grounding. If it's corner-grounded, ask about cheaper panel options.

NEC 210.21(B)(3) is the section and table that coordinates breaker and receptacle selection.

The common sense thing is if a 15A tool is on a 30A circuit and develops fault that draws double the current it won't trip. This could be a difference between smoke and fire.

Would plugging a 20 amp device into a 30 amp receptacle violate the NEC , yes it would. You said your devices are 20 amp but they probably have 20 amp plugs not a 20 amp rating. If the devices are not motor loads 422.11 not exceed 150%. What size wire was run ? If 12 awg again allowing a 30 amp receptacle would allow a larger load than the wiring method allows. There are allowances for motor loads to have a larger breaker for starting purposes but receptacle size is fixed for safety code has only 1 place using a larger receptacle is allowed it is on a 40 amp circuit a 40 or 50 amp receptacle is allowed. Table 120.21.B.3. Oops I transposed 210.21.B.3 But this violates as my comment above repeats after your comment.