How do I create a curved surface drain out of concrete?

I have a barn and a pump house (10x16) structure that are within 3 feet of each other, built in 1910. The barn's foundation is field-stone, mostly exposed on the side of the pump-house. There is a basement to the barn.

Between the buildings, there is a concrete surface drain that is cracked. The cracks run roughly for 4 or 5 feet at the low end of the drain, and all along where the concrete meets the base of the barn foundation wall.

A decent little stream of water comes in the basement where floor (slab) meets wall in a heavy sustained rain. Exposing the foundation would mean breaking up the 6" concrete for 20' & digging down 2 or 3 feet.

I thought I'd try just getting the water away first by fixing the existing surface drain, but it's really broken up.

So to replace it, how do I get the concrete to be concave in the center as they constructed it?

Concrete is an wonderfully easy product to shape. For your scenario, all you really need is make a form for the concrete that matches the concavity of your drain, and to set it in place when you place the concrete.

It's not clear when you say curved if the drain itself curves along its length or if by curve you refer to the concave portion of the drain.

If your drain is basically straight with a concave portion, the problem is very easy - PVC drain pipe of the appropriate diameter, plugged tight with rags and capped off with duct tape will do the trick nicely.

If your drain itself curves, you'll have to get more creative in making a form - possibly shaping one from wood.

Regardless of the shape, in this scenario you will want to suspend the form from above, so build a series of wooden supports and put hooks in the top of the form in a clean straight line and tie each hook to a frame so that the form hangs ROUGLY halfway into the trough when the frame is set over it.

You must also make sure that the form is lowest wherever the water is to exit the trough and highest at the trough's ends, so that water will flow properly in the trough. A 1/8" drop per linear foot of trough should suffice.

What you want is a form that from its end looks like this picture, and which has the slightest tilt to it to make the water run downhill in the trough in the proper places. 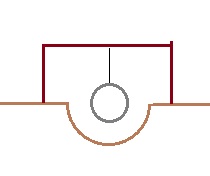 Once your form is ready, move it out of the way, mix your concrete and fill the trough up until the concrete is high enough that the form will set down into it some. Make sure there are no air gaps in the concrete so far.

Put the form in place, carefully making sure it settles into the concrete to the proper depth (ie: the suspending wire is taut). Now fill the rest of the trough's sides with concrete until its just level with the soil.

Wait until the concrete begins to set. When you can push on the concrete with your finger and not easily make a dent, remove the form, and use a wet sponge to clean up the edges where you removed it.

Not the answer you're looking for? Browse other questions tagged concrete drain french-drain or ask your own question.

4
Removing blacktop/asphalt pad
6
How to stop outside rainwater from coming in under the wall and through the concrete floor of my garage conversion?
1
basement sump pump water level above drain tile
1
Sump, French drains, or other?
0
How to level concrete surface?
1
Water always coming out of my perimeter drain around my house
2
Water pressure from slope causing crack and lean in foundation. Is a French drain the answer?
0
Poured door transition - Safe to dig around?
1
Can there be too much water for a drain system to move?