I have a toolshed attached to my garage with an outswing door. The door appears to be screwed into the moulding instead of the stud. Is this typical for an outswing door (see photos)?

I'd planned to install a deadbolt and some security hinges to make it slightly more difficult to break into. However, all that seems moot if the moulding could just be popped out with a prybar.

Granted it's not a security door or anything so someone could easily break through the door if they wanted to.

To summarize: Is this hung correctly? Can I install a deadbolt with it hung this way?

No and no (well yes, but not with the results that you want)

It was done that way because it was installed backwards (on purpose) as an out-swing door rather than the typical in-swing door while the door frame itself was not reversed and is set up for the in-swing condition. Note that the piece of wood that the door closes against (stop molding) is not centered in the frame, refer below one of your pictures that I marked up. They made up for the lack of width for the hinge by installing them partly on the trim.

Your best option is to either pull the frame and turn it around so that the hinges can sit further back and fully on the frame, or, pull off the stop molding and move it back. Of course, you would then have to deal with hinge and latch cutouts. Also, be sure that the door still clears the exterior trim and siding.

After moving it back, then your deadbolt screws can be screwed into the wall stud, which is how they are supposed to be installed (not just into the door frame) 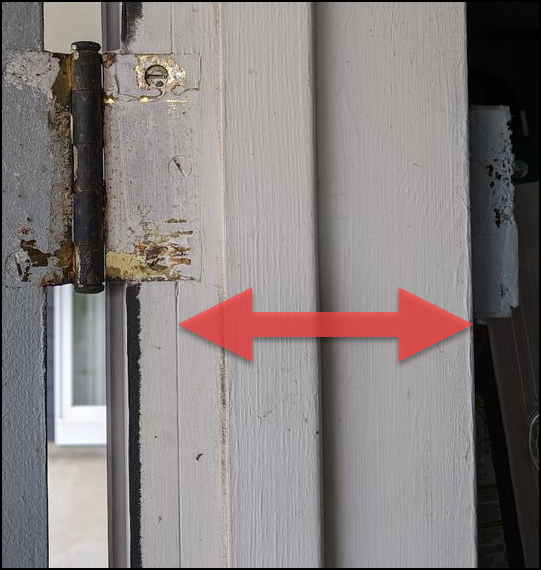 Sometimes sheds just are not built like standard construction. You are right that the door is mostly hung on what appears to be brick molding. If you want real strength from the hinges and the latch side of the door, setting it back into the opening where you can grab studs is going to be your best bet. Having the door inset a bit also makes prying attacks a little harder (not much, but something) but the main goal is to get all of the hinge screws and latch plate screws into a structural member.

On the plus side, it looks like the stop molding is just nailed onto the door casing rather than being a single piece of casing with an integrated stop, so moving the door back into the opening might be a little easier.

Not the answer you're looking for? Browse other questions tagged doors lock shed security deadbolt or ask your own question.

0
Replacing my locks/door handles
2
How do I find a replacement door lock for this?
2
Brand New French Doors Installed By Contractor.. Leaks same day. Is this normal?
2
Are these doors installed correctly, and are they secure as they are?
0
Question about foundation and door of my house
0
Key stuck in Security Door
0
Outswing Door Strike
5
Security door with lock guard