Can I use blocking between floor joists to support off-center jack studs in a load-bearing wall?

I have a load-bearing wall running down the center of my house, perpendicular to the floor joists. As this house is from the 1920's, there is no subfloor - the bottom plates of the walls sit directly on the joists. The studs and bottom plate are 2x4s, the floor joists are 2x8s.

I started relocating a doorway in this wall to accommodate our new floor plan, but I forgot to consider how the loads would now be transferred! Specifically, the jack/king studs for the new doorway don't line up with the floor joists. When I cut away the portion of the sole plate inside the doorway, there will now be two "free" ends bearing the load above that may not be properly supported by the floor. This diagram shows a birds-eye view of the situation: 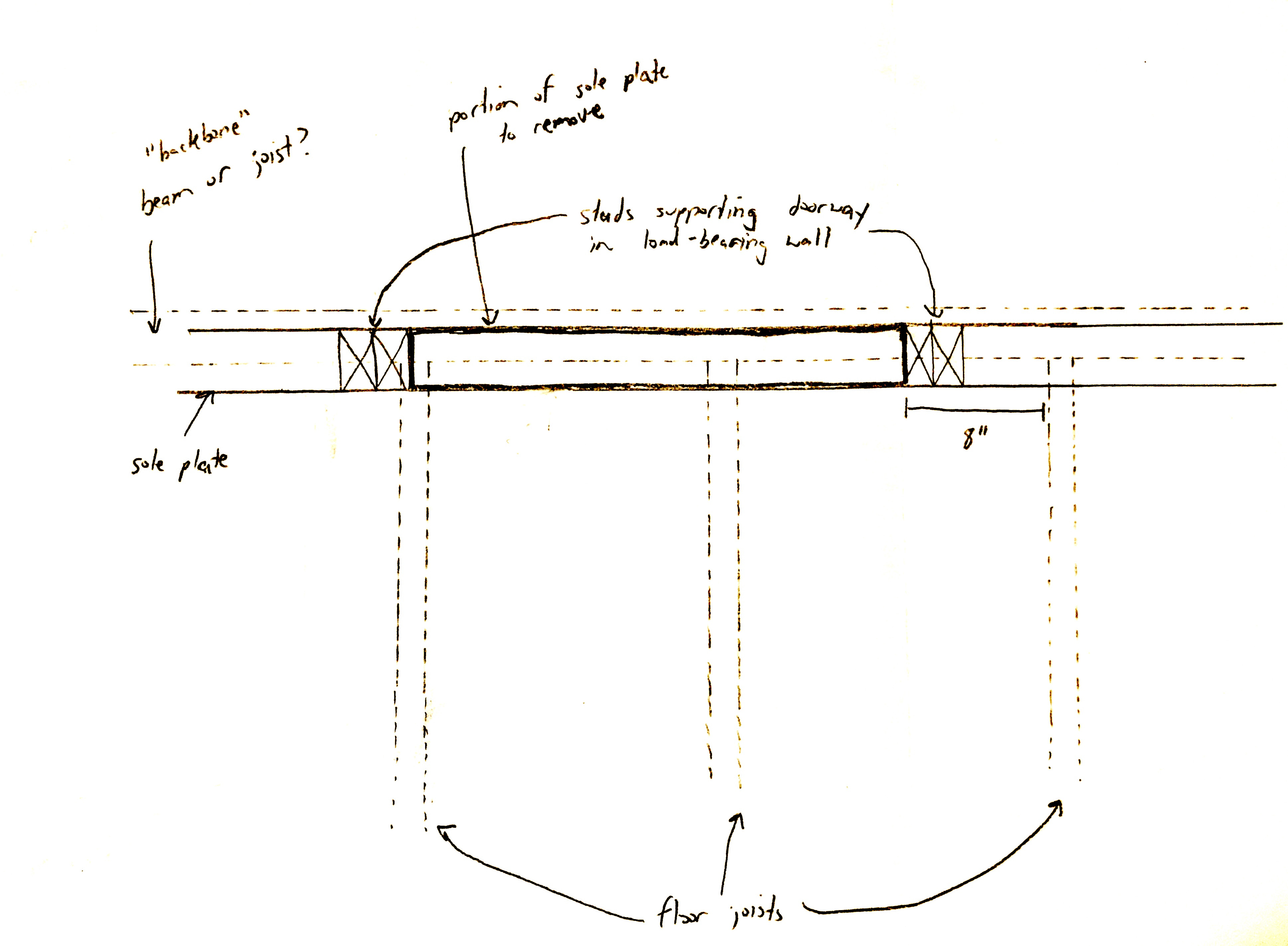 My thought is to simply install some blocking between the floor joists, parallel to the wall, to support the new studs. Will this be sufficient to prevent sagging? The blocking would be as follows (in red): 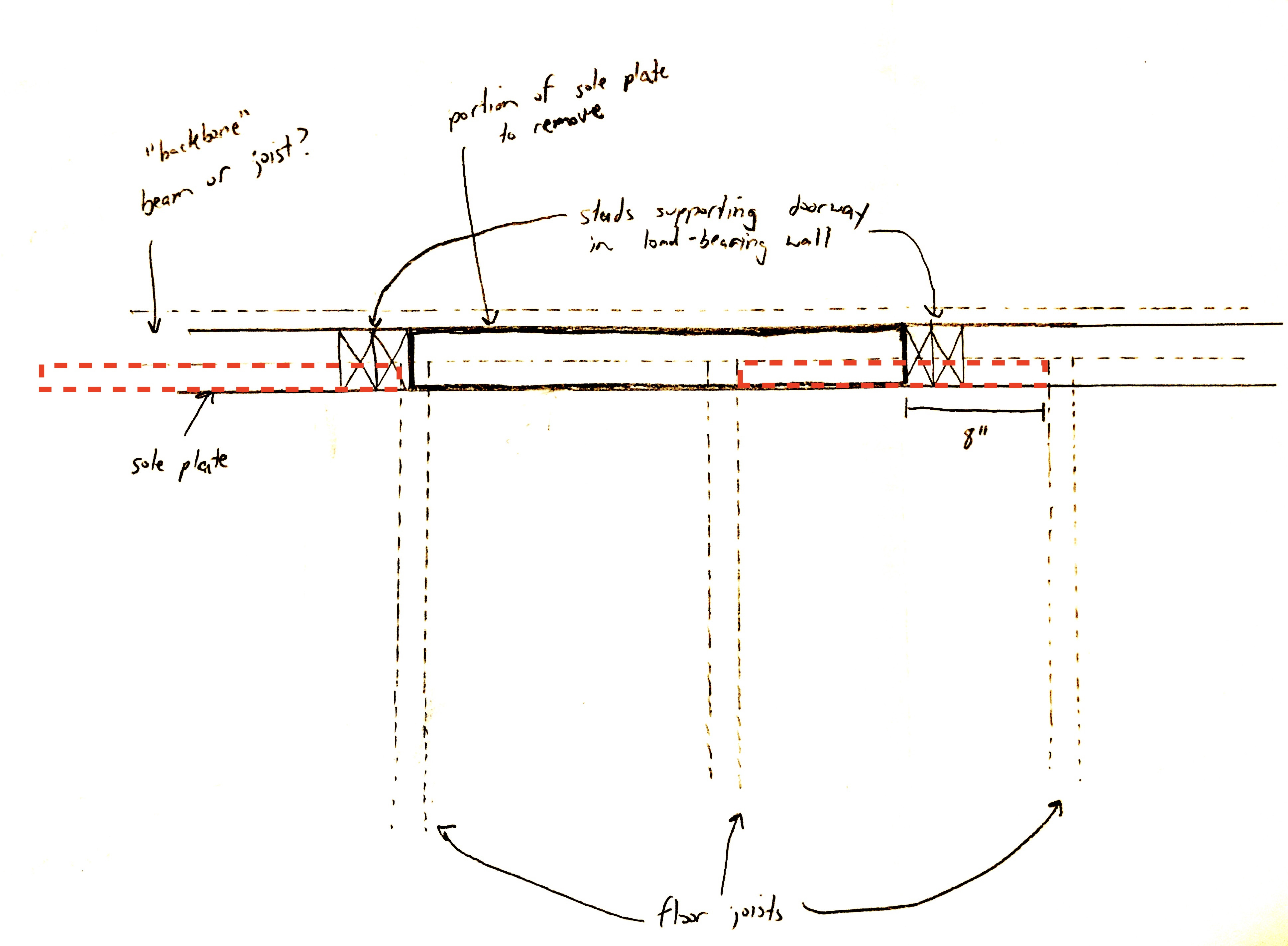 That should be just fine. A few points for clarity:

With a beam nearly directly under and supporting the joists that are supporting the wall, all you need to do is provide blocking to transfer the load of the trimmer and king posts to the beam below. 2" bearing is enough (the depth of the studs is for other factors and the full 3-1/2" width is not needed here)

This because the loads on the wall haven't changed, you've just slightly relocated some of them (removed 1 stud and moved that load to the nearest 2 studs and there you are adding at least two studs (to get the 2 trimmers and 2 king studs depending on layout compared to the wall)

Why don't you just make the opening for the door oversized, bear the studs down onto joists and then fill in the portion that you don't want as door. Add 24" to the span of the header for the door.

First & Foremost, Let's reevaluate what you are Asking a 1920 house has 2"x4" Bearing wall studs 16" O.C & 2"x8" (Guessing 16" O.C as well,Sometimes their 19.2" O.C.) Nominal Lumber. Today's lumber is 1-1/2"x 3-1/2" and 1-1/2" x 7-1/4". You are not Specifying the distance of Door Movement or the Loads Transferring Down.There is a Lot to Consider when moving Loads around, Yet I am not there to evaluate for myself and the information your giving is Vague! Based on My Knowledge of Engineering and Framing, I believe Just Blocking the Floor is a Mistake, It may seem/Look Good when Complete until the Settling Starts then your door may have Future Issue's! 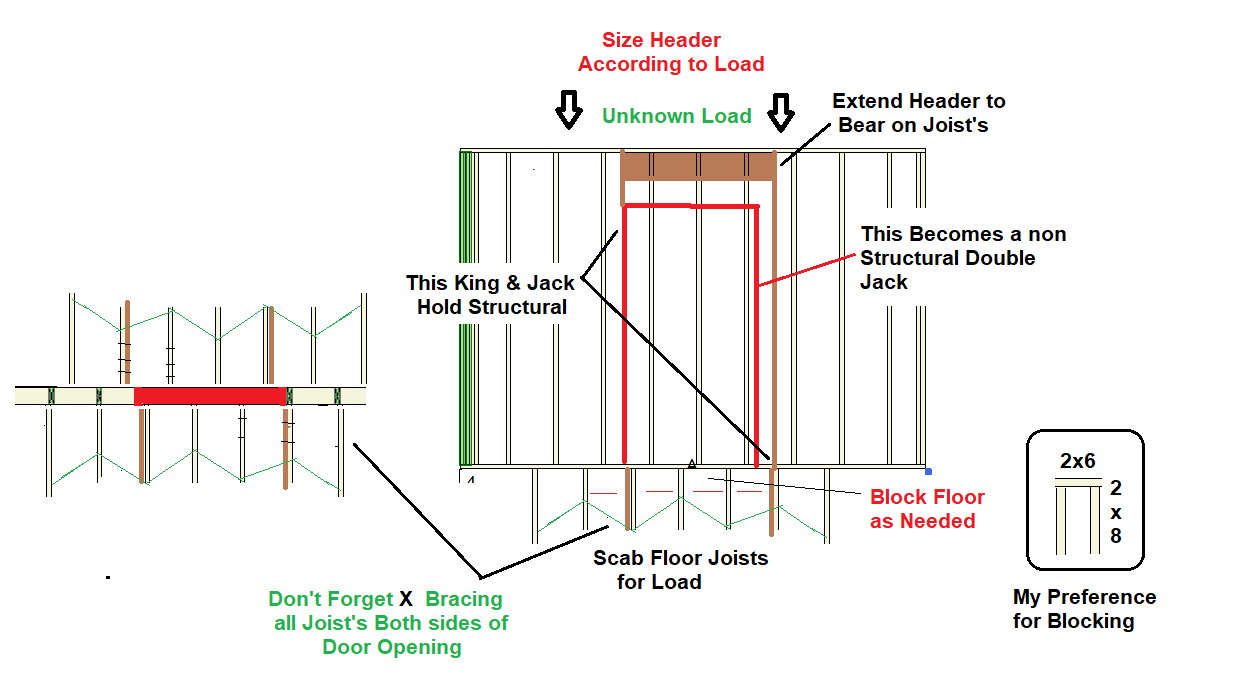 We run into this all the time. As already mentioned, simply frame the opening oversize so the studs align with the joists below. Everything placed under the header is then non-load bearing, and you can add additional framing to make to doorway RO, without structural concerns.

I have a similar home, and encountered a different issue, but similar. The headers in my house were true, single 2x6 pine. When I opened up my first floor, and found my headers looked like smiley faces, I knew I had to fix them. Everything is now 2.0 3.5"×12" lvl. Money well spent in my opinion, as the house will now last another 100 years without concern.

My biggest problem wasn't the single pine header in the 7' opening, in my center load bearing wall. It was the floor. 1 day after building temp walls from basement to 1st floor, and from first floor to second, to ensure everything was level, then installing the lvl with double jacks, kings, and cripples. The next day I found the header 1" ot of level. Pretty major issue.

Come to find out, the openings posts were not sitting on any structure other than 1x6 sub floor. From the basement I could see the floor dining down like the shape of a balloon pushing through the floor.

To solve this issue, everything got jacked back up to level, and solid blocking was installed under posts to support beam directly underneath. As floor was framed with 2x8 floor joists, I cut new 2x8 blocks and hammered them in. (I also doubled up floor joists with construction adhesive and nailing to fix how bouncy the floors were. )

The end result was solid blocking from every king and Jack to sub floor, to block, to carrying beam. This is required under the international building code. Big pain in the but, but well worth it.