I have a commercial range, 36x24" on which I do things like stirfrying for 30 people using a 24" wok. Our hood which advertises 900CFM is performing poorly. It uses a 6" duct which has to run up 3' and then horizontally through the ceiling for about 15'. I plan to either have the hood replaced or the duct size increased, or probably both.

@Tester101 provides a helpful formula for necessary CFM this similar question though I'm surprised it doesn't consider duct length and width at all. But since my small kitchen is open to a large dining room with 12' ceilings, and we're talking about a commercial range, I probably should have 1200CFM. I've seen 1200CFM hoods with only 6" ducts, but given I need to run 15' in the wall, I think the duct needs to be bigger.

Added on 12/3: Thanks for your comments everyone. We ended up installing a ten inch duct, a no-nonsense custom built hood. and putting the fan outside: http://www.grainger.com/Grainger/BROAN-Exhaust-Ventilator-4YG73 - 600CFM but it works a lot better than the 900CFM hood we had before, though I think we probably shouldn't have dropped the CFM.

I think the focus on the duct size and length is misleading here. Duct size can matter if it is a severe restriction in the system, but a factor more likely to be a problem is that you are using a axial fan and not an centrifugal fan.

Each installation of a range hood will have its own resistance to the flow of air. This will depend on the restriction of the entire air flow circuit. The most common sources of restriction in that circuit are the following:

Resistance curves plot the air pressure the fan will encounter versus the air flow that the fan is pushing. A characteristic resistance curve follows an affinity law and is therefore parabolic in shape.

SC1 and SC2 in Fig1 are examples of resistance curves. The two different curves emerge when something about the resistance of your installation to air flow changes. For example, SC1 might be the resistance curve with a kitchen window open (less pressure required for the same amount of flow) and SC2 might occur with all windows close (it would take more pressure to achieve the same amount of flow). 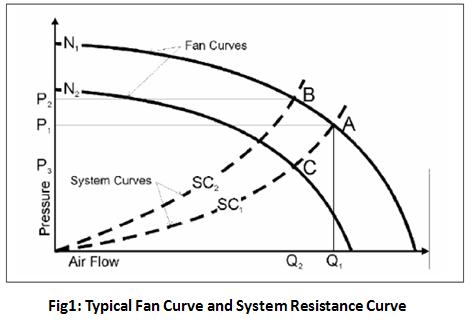 For a given RPM, each fan has its own relationship between the flow it produces and the pressure that has to overcome. These are shown in Fig1 as curves N1 and N2. The RPM of N1 is higher than N2 and, accordingly, it produces more flow for the same amount of pressure.

The actual flow rate achieved is found at the intersection of your installation's resistance curve and your fan's curve. So, in our example, with the windows closed and the fan at the higher RPM, this is the intersection of N1 and SC2 indicated on the plot as "B". In HVAC engineering terminology, this intersection is called the "operating point".

How Air Flow is Specified for Range Hoods

Air flow of range hoods is specified at zero static pressure. In Fig1, this corresponds to the flow rate where N1 and N2 cross the x-axis. The specification provided by the manufacturer is not the air flow you will achieve once the fan is installed because there is no real-world situation where the static pressure encountered by the fan is zero.

You are unlikely to be able to obtain either a fan curve for a given range hood nor a resistance curve for your installation. This is not a practical problem in selecting a fan. That is because range hood fans are one of two general fan types each with a dramatically different capability.

Curves N1 and N2 are typical of a centrifugal fan in that they are able to create meaningful airflow despite static pressure encountered in the installation.

Fig2 shows a third fan curve A1 which is typical of an axial fan in that it stops producing any meaningful flow at very low static pressures.

Note that if you were to look at the manufacturer's specifications for the centrifugal fan that has curves N1 and N2 it would be in the same ballpark as the axial fan with curve A1.

Note that the air flow of the axial fan when installed is only about 1/3 of the centrifugal fan despite the manufacturer's specifications for airflow being comparable.1

Note also that the airflow at the operating point is only about 1/4 of the manufacturer's specification for the axial fan, while it is more the 3/4 for the centrifugal fan.1 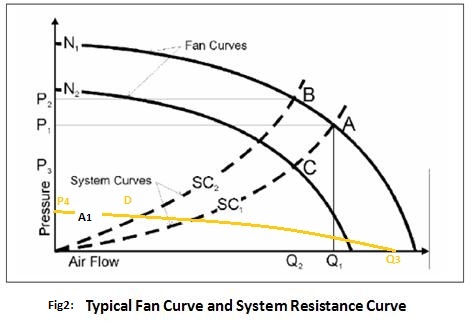 Remember, each cubic foot of air that you exhaust has to be made up somewhere else in the house. This might be an open window, your furnace's makeup path, the exhaust gases of a fireplace - yikes!, a backflowing bathroom exhaust fan, sewer gases sucked out of air admittance valves, etc. When you have an operating centrifugal range hood fan specified at several hundred or a thousand CFM, you should have a good source of make-up air. Otherwise, you might end up with unhealthy air from unexpected places being sucked into your home.

1 These ratios are for this particular hypothetical graph. They are meant to be instructive about the magnitude of the difference between actual and manufacturer's specified flow rates. By no means are these specific ratios generally applicable. What is generally applicable, however, is that the flow rate for axial range hood fans drops off significantly faster with static pressure than for centrifugal fans.

Not the answer you're looking for? Browse other questions tagged kitchens ventilation or ask your own question.

29
How many CFM for a range hood do I REALLY need?

29
How many CFM for a range hood do I REALLY need?
7
Can an HRV replace the air exhausted by a range hood?
1
Do I have to provide better support when hanging a range hood from soffit framing?
1
Range hood installation for non built-in stove
0
ventilating mildew-prone walk-in shower
1
What can I use instead of a ducted range hood in my kitchen?
0
wiring hrv in a confusing house