I've removed the carpet on the stairs from 1st floor to 2nd floor. There is hardwood under but half the boards are cracked all the way across and deflect noticeable when walked on. I'm debating what all to do to them. I'd like it to be safe, look good and not squeak.

The stairs are 34 inches wide and there is no center support. The house was built in 1954, there aren't stringers, only individual blocking nailed on each side for each stair tread. There doesn't appear to be enough room to put a center stringer in between the ceiling below and the underside of the stairs.

I'm leaning towards replacing at least all the treads, maybe the risers too. Can I stiffen them somehow if I can't get other support under them?

The front few inches of one stairs was not attached, that's the only access to look at take photos that I have. 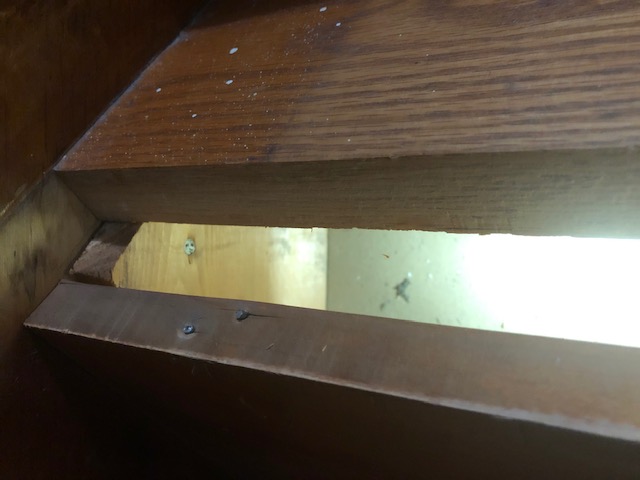 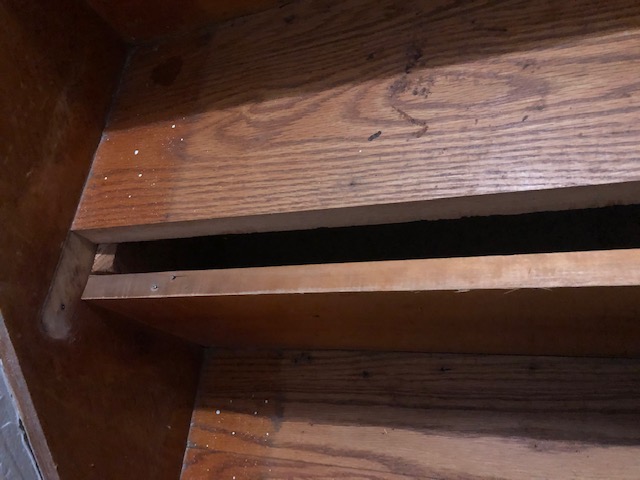 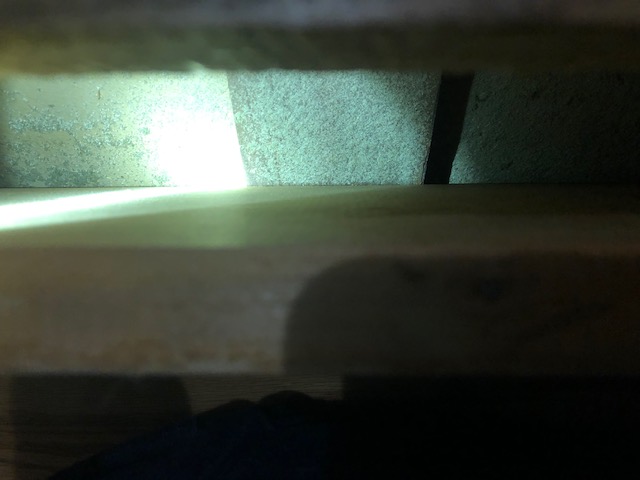 That structure is adequate for a couple reasons:

I would simply repair what's there. Countersink about four screws into the nosing for each tread. Liberally apply wood glue or construction adhesive and mount them back in place. Cap the screw heads with oak plugs, touch them up with a sander, then stain and varnish.

If you want to replace the treads, oak ones aren't going to be cheap. An alternative would be particle board, which doesn't look terrible when stained and varnished. They're about 1-1/8" thick and would be plenty strong if glued down to those risers.

If you see that the treads are what is giving and not the blocks supporting the treads, as isherwood says, there is no need for a center support, precisely for the reason he stated. Many stairs are built without center supports.

When I have my preference as to how I want to build stairs, this sketch illustrates my joining method. 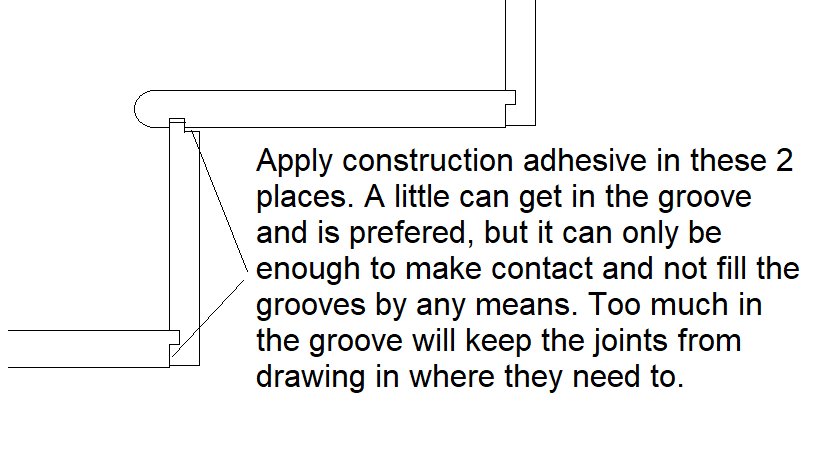 All tongues and grooves are 3/8"X3/8" The groove under the tread since it is thicker 1 1/8", will leave plenty of mass to keep the nose intact. In your old tread, it looked as though the treads were glued up, but that glue joint failed, unless all are made that way... The idea is the groove will allow the treads to be better supported by the risers and when glued will prevent squeaking. The groove under the tread will allow a little give and take in the differences of the some of the risers, treads too, which will typically happen in hand made construction, if not by the differential shrinking of the support members.

If you have access to a table saw, I make the dadoes (grooves) by getting 4 or more blades the same diameter and stack them up on the saw arbor, if the saw has a cast iron arbor, until I get the width of cut I need. This is limited by the size of the cutout in the throat plate, but 3/8" should be attainable. Do not do this with a light weight portable saw. Clean the original supports so the adhesive can be applied there to so nails will hold everything together until the glue set up. Stay off the stair system if possible until the glue sets go the glue tightens up all the joints. If the joints are moving before the glue sets, it will be a weak joint and may move again.