Which wire is the earth wire

I'm replacing a hob and they were wired up for Earth, Neutral and Live.

Now I don't know which one is the earth, they have a different composition of wires in the cable.

Here is the image 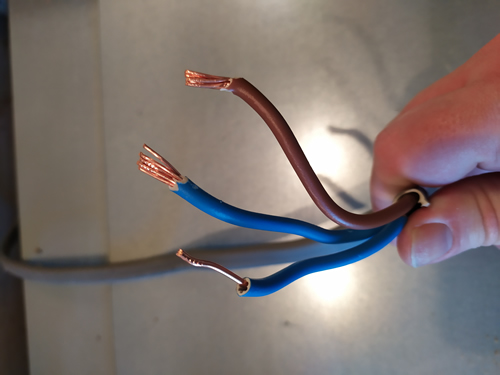 This isn't an electronics design question so you're on the wrong site. We'll move it to https://diy.stackexchange.com and delete this.

To answer your question: 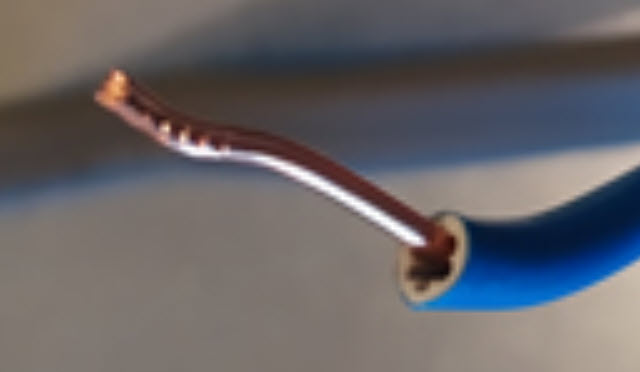 The guys in the photo-forensics lab say that someone has pushed some blue insulation from a seven-strand neutral wire onto the uninsulated solid earth wire.

From your other posts and from looking at the type of cable, you appear to be in the UK.

In the UK normal practice is to sleeve the earth wires (unlike the Americans who leave theirs bare). It looks like whoever installed the hob did not have any Earth sleeving to hand, so they used a bit of insulation stripped off the neutral conductor instead.

You should swap it for some proper earth sleeving so as not to confuse the next guy. I would also want to inspect the rest of the circuit to see if there were any other problems with it.

1
How do I wire a pull cord ceiling switch?
1
How do I replace a strip light with wiring that doesn't match the old light?
1
how to wire a light with only 2 wires available?
7
I'm replacing my outlets and I have too many hot/neutral wires, what do I do?
1
Is it OK to have a redundant path to earth?
1
Wiring up new light fitting
1
My ceiling light won't turn off, how do I wire it up correctly? (UK)
1
Is there any difference in the type of wiring in common household?
1
Help with wiring an electric oven after moving it to be underneath an existing electric hob (UK)
1
How should I connect wiring for this ceiling light?