Can I partially suspend an angled climbing wall from my garage trusses?

I'm planning on building a home climbing wall in my garage. I'm wondering about the structural integrity of attaching it to the trusses. They are 2x4s, 24" apart, and span about 30 feet.

This image shows basically how I would build the wall (the left one): 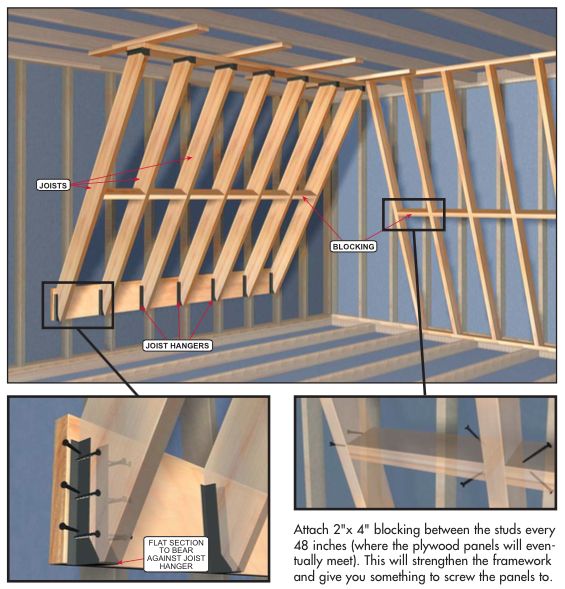 My wall will be 8' wide by 12' tall at a 45 degree angle (I have 9ft ceilings). Since this is a bit of an aggressive angle I'm concerned about attaching that much weight to my trusses.

I would also be adding some support from the middle/upper area of the climbing wall back to the garage wall, similar to this image: 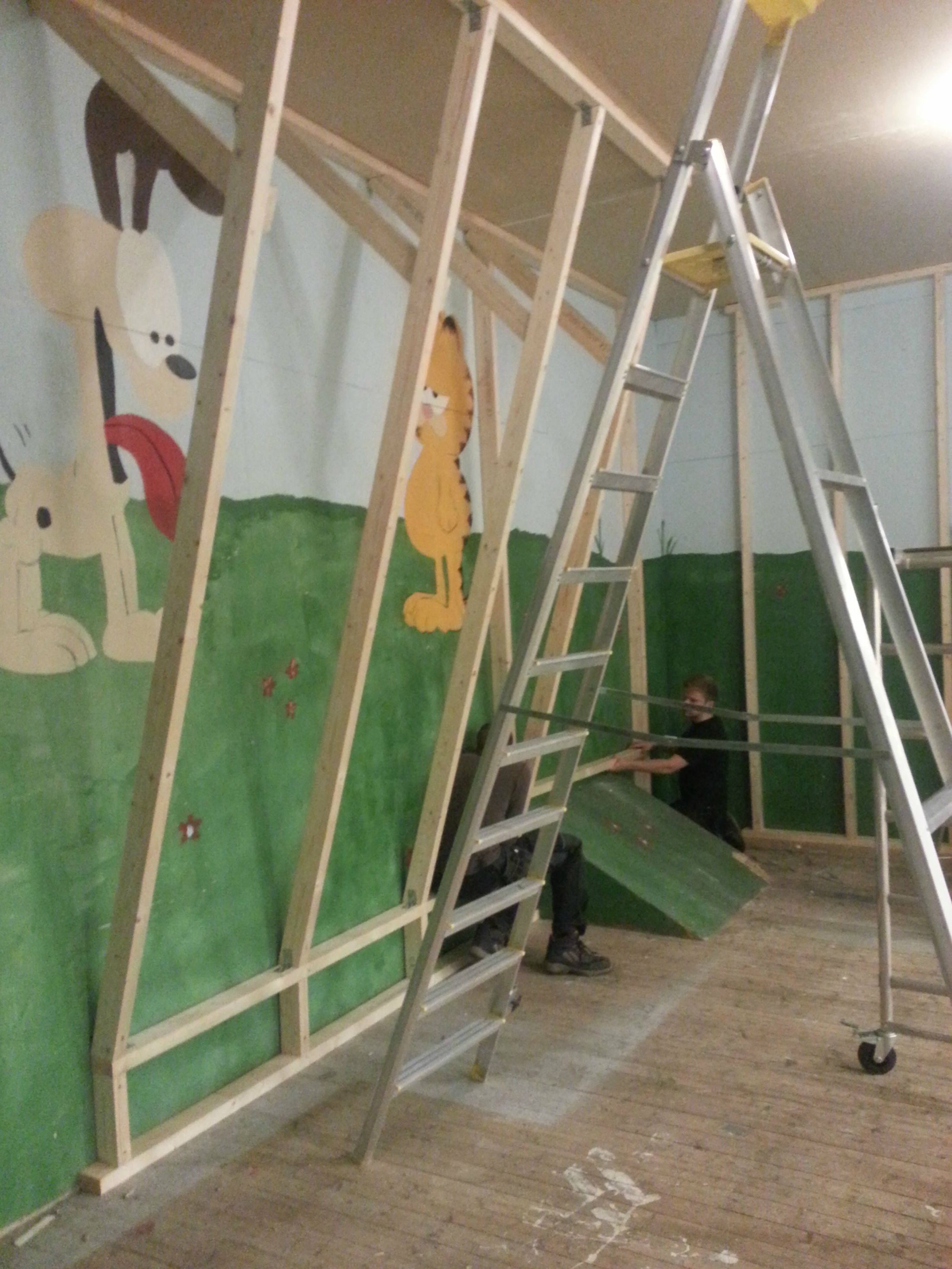 If that doesn't seem like it would be alright, how can I modify it to work? I was thinking I could add some 4x4 posts to the each side of the top plate, but I would prefer less intrusive options.

Would I need to reinforce the garage wall too? I can double up the studs if that's necessary

One last question, that original image is using 2x6s for the climbing wall frame, would 2x4s be alright as well? I've seen a bit of both on the internet.

Thanks for any advice.

Edit: Here are some pictures of the attic I took a while ago, I tried to add an outline for where the wall will go (roughly). 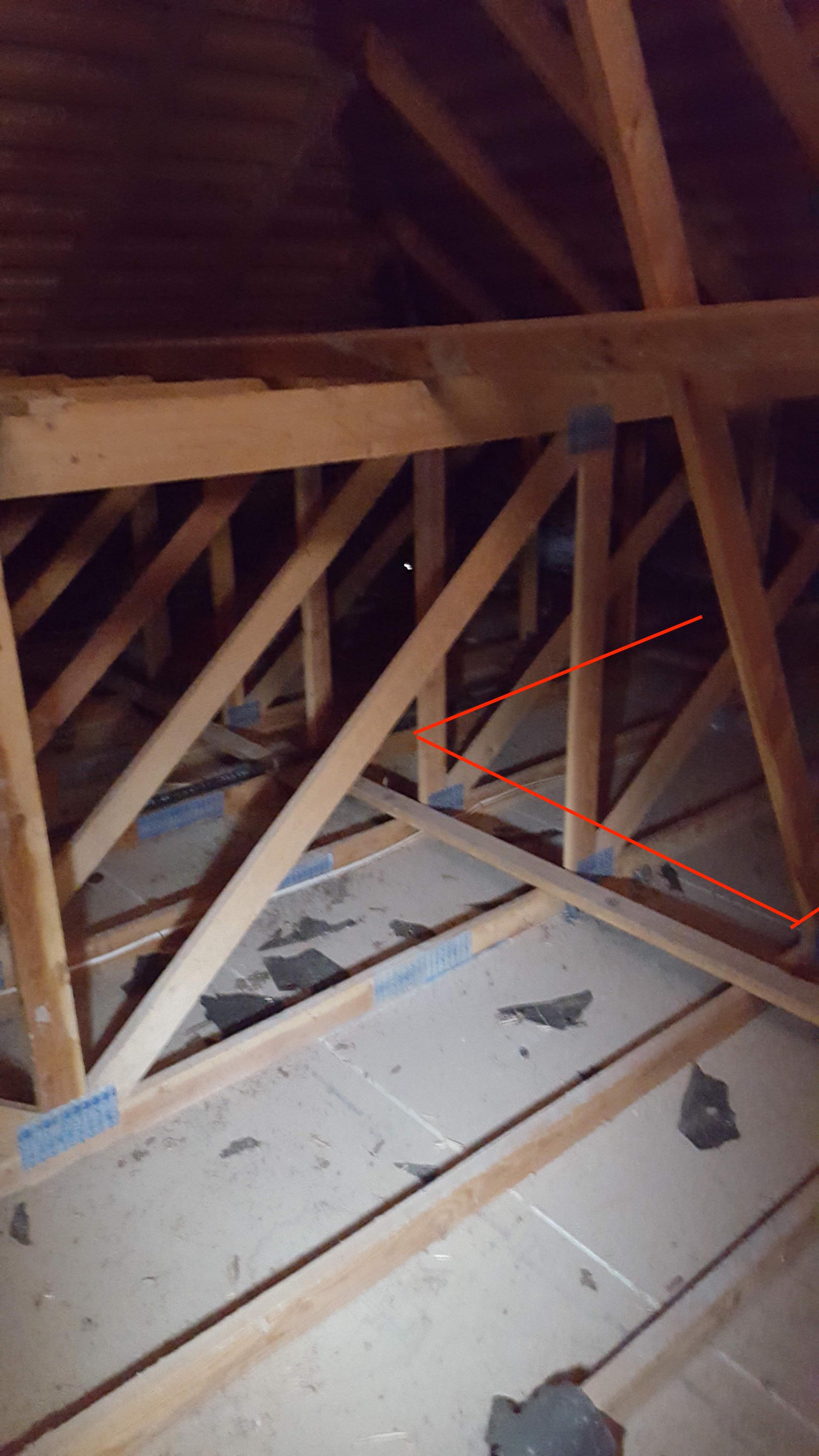 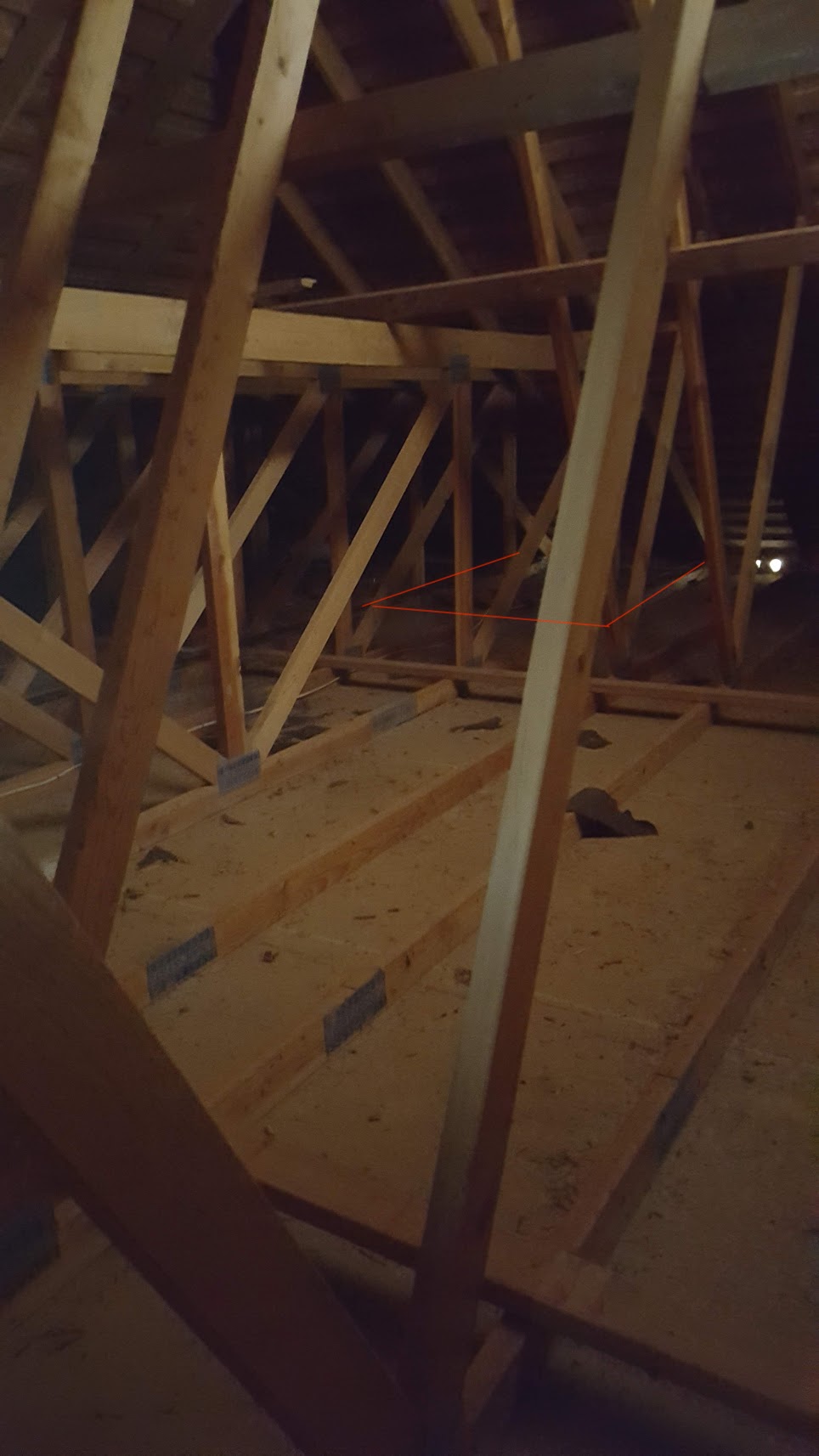 Here's an image to help visualize what I'm hoping the wall to be: 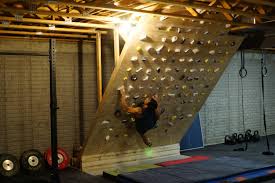 Per most recommendations I shouldn't attach much weight to the trusses. My current plan is to anchor the climbing wall heavily to the garage wall with joists at an angle (like the second picture but beefier).

For attaching the top of the climbing wall to the trusses I'm going to lay a 2x6 across about 6 trusses on top from within the attic and then bolt a 2x6 from within a garage to that one (so the trusses are sandwiched in between), that way I don't need to drill/bolt into the bottom chords at all.

I'll be doing the same thing about halfway between the top of the climbing wall and the garage wall and attach the climbing wall there as well. In that way whatever load is on the bottom chords will be spread out across a larger area.

You need to define the type of garage ceiling you're looking to use. Not all trusses can be used for downward forces (say it keeps the walls from spreading) and if you're accidentally mis-describing them you could be getting some bad advice.

That said, assuming your climbing wall touches the ground the load will be carried there. Lateral forces on the side of the wall from 'pulling out' are supported by the cross bracing in ceiling. I'll see if I can find the article on design I read on the 'net about 3 years ago.

The example image shows all of the load being pulled downwards (compression) to the floor, and the ones nearest the wall providing tension to pull the rest towards the wall. You should have a large piece of anchored plywood or 2x8 back there to bolt into- lag bolting into your 2x4 sticks in the garage. Then you can attach multiple points to the 2x8 and the 2x8 can resist twisting the rear wall.

The bottom chord of your attic is in tension- it's to hold the walls from spreading. The upper chords are in compression and are carrying the load to the double sill plate around the base. The remainder of the web is stiffeners and compression/tension. Diagonal'ed boards in the attic prevent your roof from twisting around.

Just really limit how much 'weight' the ceiling is holding. If you do the example you've got, really emphasizing connecting it to the wall, it should be fine. Assuming of course the wall is connected to the floor somehow...

You have done an excellent job and this will be very strong (assuming a standard wall covering like dry wall or wood sheathing and not something odd like a heavy pseudo rock face).

Use #8 x 3" screws for the attachment to the underside of the trusses, (2) at each block and truss. No larger as this will compromise the truss too much, that member is in a state of tension. I suggest using the same screws everywhere, it's just easier than nails and you won't bang everything around. Get a powered driver tool of course.

Your attic is totally capable of holding the walls and a climber's weight. However it cannot deal with a moving climber and I don't see how this would ever be legal (could void home owner's policy) without sign-off from engineer and city.

If you are going to do it no matter what then what you need to focus is cross lateral support in the attic. I would put some intensive blocking, I would add at least 2x4 stirrups across the top and would go with plywood over that but I might skip that due to weight.

Not the answer you're looking for? Browse other questions tagged walls framing garage structural truss or ask your own question.

4
How should I hang racks from the garage ceiling with trusses?
0
How to build attic space in garage
2
Why are some of my trusses nailed to interior wall top plate?
0
Can I use 4 x 4 to extend the space from the wall with a tv mount?
0
Attach Garage to Existing Wall
1
Can I attach wall studs directly to sleepers on the ceiling joists for an angled climbing wall?
1
Home climbing wall - does this design look structurally sound?
0
Reinforcing Truss-based Garage Ceiling