We got this Acacia dining table from costco and noticed after a year or so it started to crack on one end. Initially the crack was pretty tiny and now it's very noticable.I was wondering what are the ways I can fix this? 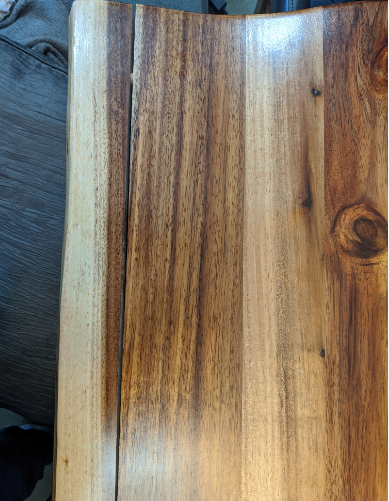 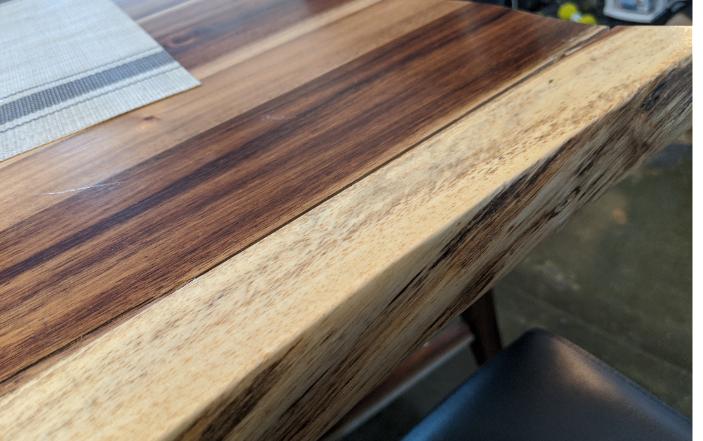 There's generally greater success with making it a feature than trying to hide it.

Clamping it together and gluing will generally fail unless it's also rehydrated to the level it was made at first, and then kept that way. So if you live with the air you have, not going to fly unless you buy locally made furniture or avoid solid wood in preference to veneers over plywood or MDF.

While you can fill with wood, or leave it open (first putting in butterfly keys to try to limit further movement) one of the more visually appealing methods is to use a "crushed stone inlay" (sometimes the stone is really plastic, which, since the epoxy holding the stone in is plastic, is not that huge of a deal if you like the way it looks.) Simply using colored (often black) epoxy is anoter stylistic option.

Turquoise in mesquite cracks is probably the most common example of this. 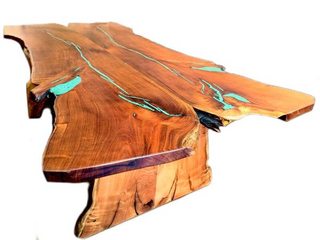 I also know woodworkers who fill voids or make features by casting pewter directly into wood (it melts at a low enough temperature that this works.) 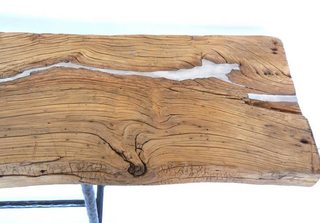 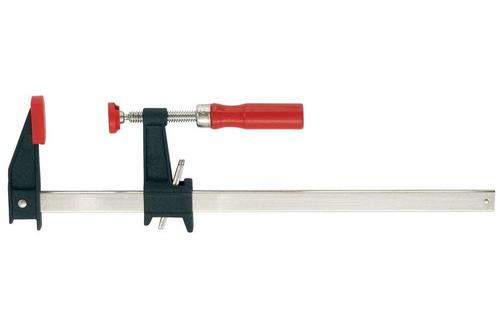 This is on topic no reason to close. On solid wood and laminated wood surfaces once they start to split it can be hard to stop. I have found oiling the wood can help usually the underside is not finished application of linseed oil has helped me in the past, also pulling the wood together with structural screws I have done this with large walnut pieces that started splitting 4/5 years later (drying and twisting) where the oil did not stop it. I prefer oil over moisture as the humidity variation will be harder to control over time than oil once a year or two . In 1 case I had to cut holes large enough for plugs , installed the screws and started pulling closer together, then sealing and installing plugs. Structural screws with threads on the end allow a good grip past the crack, don’t try and seal the gap in 1 try I will do it over several days even weeks and in many cases the wood can be brought back together so a very thin oil coat or varnish will hide it. I have had this happen on 4” walnut that had cured in my shop for 6 years , I made some tables and a mantle out of it and it later started cracking , the oil stopped it but then over about a month I pulled it back together after that I started oiling the bottom side of the tables and the mantle and the crack stayed sealed and the large table and 2 end tables never did split or crack.

Not the answer you're looking for? Browse other questions tagged woodworking wooden-furniture diy-vs-pro cracks mini-split or ask your own question.

1
How can I repair a chip in partical board table top?
2
How to repair a small hardwood crack?
1
Reinforce chair stretchers with screws?
3
How to repair a crack along the grain in a solid block of wood from a single tree?
1
How to fix water damage to wooden table
7
What do these cracks in my drywall indicate?
1
IKEA outdoor table: recovering to the original color
0
Crack in concrete floor slab
2
What material can I put on my wood kitchen island to make the surface smooth and waterproof?