I put together one of those 1 million fastener sheds from lowes. I didn't do a lot of ground prep but tried to make it as flat as possible. There were initially some areas under the perimeter wall that were too low so I added dirt under those sections. The exterior walls then all sat flat but due to time constraints I didn't try to completely level the inside dirt area. I then put some 6mil poly down on the flat ground and then put the shed on top.

A season later and I have some water puddles in the low spots. I am not sure if the water came in from the change in season and humidity - over the winter there were certainly times where the metal ceiling of the shed was sweating with condensation and dripping.

Do I put a hole in the poly at the low spots to allow the water to drain? Should I put a layer of sand on top of the poly? Anyone add a vent to these things to allow more air flow? The shed is in a really tight spot so I can move it maybe a few feet in one direction but it is pinned in by a tree, a garage, and two sides with fence.

I suppose I could cut the poly, add soil to level and tuck tape in new poly. Really I guess the water and ventilation are the main issue. There is a probably a liter of water sitting on the floor and that seems like a lot for condensation from season change but I am pretty sure that the grade all around the exterior slopes away so maybe there is some kind of small leak in the roof. In the pacific north west we have enough rain that if there was any sizable leak the thing would be saturated.

With two people I can lift the shed vertically. Ideas? Thank you in advance.

The plastic is good to prevent growth from taking over the shed floor. You're now paying the price for not taking the time to do proper ground prep. This is going to be some additional work, but think about adding more sand to the top of the plastic, level it and put down some of those 16" x 16" concrete pavers. Those are easy to keep level and any water dripping down for any reason would fall into the cracks of the pavers and be absorbed by the sand. Just a thought.

Two years ago I built a 6'x 3' kit type shed in my backyard and dealt with similar drainage issues. 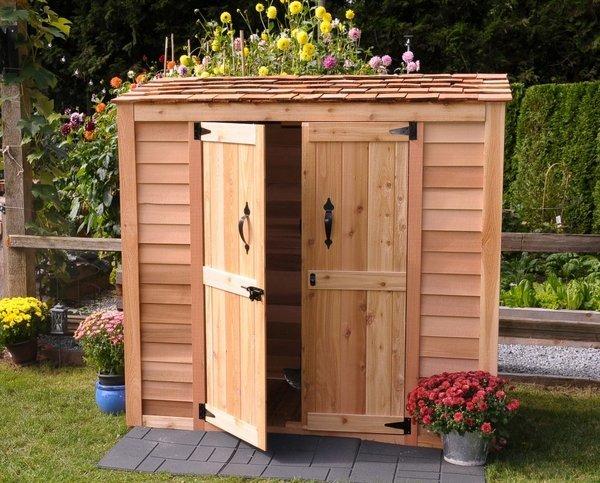 I would move the shed off the base and get rid of the plastic. Since the grade slopes away from the shed I would use metal landscape edging to set a perimeter to hold pavers. Level out the sand and use 12" x 12" pavers to build a base. You'll want the base to extend out past the shed by at least 6" around the sides and back and at least 12 to 18" for an apron in the front.
This will allow water to drain down and away from the shed. Depending on your situation you might also want to improvise vents for air circulation between the shed base and the pavers - on the floor perimeter.

The water is likely from condensation and possibly dripping down the side of the exterior walls. Plastic is used in the crawlspaces of houses to keep moisture down that originates from the soil, and as you noted you don't have for your shed, there is also foundation ventilation so that any air that is moist will vent to the exterior and be replaced with drier air.

For your shed, the plastic isn't necessary. I would suggest making a cut in the lower areas so that the standing water will drain away.

4
How can I add a piece of timber to my metal shed wall without creating a leak?
1
How should I relocate my shed?
3
Must all firewood sheds have airflow?
1
Keeping a shed warm in winter and cool in summer
1
Should I be concerned about ventilation in a small room?
0
Proper gutter downspout location on sloped ground for shed
1
What's the best way to deal with the floor of a shed with water infiltration?
0
How to repair a Rubbermaid resin shed roof
0
Moisture in bay window bench seat
0
Putting windows on a shed