Steps to finding out what part of my fridge is tripping its GFCI outlet? 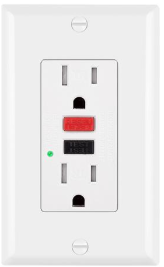 My Kenmore fridge kept tripping the circuit breaker in the GPCI once every 10 hours or so. I have had the fridge for almost 9 years now, and the problem started a month ago. What I tried so far is that I plugged the fridge to another GPCI outlet with nothing else plugged-in and the problem persisted.

The manual says nothing about this problem. Having a Kenmore technician come and try diagnose for the problem costs $129 with no result guaranteed. So I thought I should try doing diagnosis on the fridge myself. But where can I start (e.g., how do I know if it's the compressor drawing too much current or something else that needs replacement)?

Any guidance or reference to tutorial would be helpful. Appreciate it.

Installing a GFCI on a refrigerator basically disregards the use-case for GFCI. It's a well-grounded, all-metal box, with all the mains electric gear in the very bottom back of the machine, totally inaccessible in the vast majority of people's installations... and you are unlikely to drop it in the sink.

As such, there is no practical safety benefit to putting a fridge on GFCI, unless the branch to the fridge is totally ungrounded. 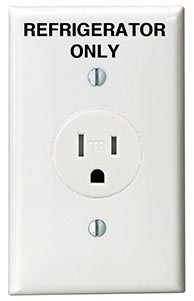 What the "Take your shoes off at the airport" gang cannot wrap their minds around, is the concept that dueling safety systems makes safety worse. Consider a remote warehouse with a big Cat diesel fire pump. Some epsilon-minus decides that every diesel on the property needs a low-oil-level shutoff, to keep people from running forklifts etc. a quart low. Well, there's a fire. The fire pump trips out on low oil, and the warehouse burns down. That's dueling safety systems, and you don't want that.

The fridge has One Job: keep food safe. It's not a big shock risk, so GFCI won't save any lives. GFCI gets in the way of its One Job. It's bad enough with a dedicated GFCI, but with a shared GFCI, the GFCI could trip, someone could reset it to get a different appliance back up, the fridge would re-chill after bacteria had its way with the food, and nobody would be the wiser.

The above receptacle is legal in any kitchen. It is also legal in any garage, basement or other place you might put a refrigerator that normally requires GFCI, if you get a waiver from your AHJ: the local inspector. This is a perfectly sensible setup, and there's no good reason not to grant it.

Why is it tripping? Because like lots of fridges, it has some small leakage between hot and earth, perhaps when a compressor cycles off: there's a big inductive spike because inductors are trying to keep current constant, and they spike voltage until insulation breaks down somewhere to sink it. It really is a ground fault, but it's a trivial and unavoidable one. Fridges do this.

In the DC world you'd put a freewheeling diode on that inductor. In AC a VBO (Voltage Breakover) would the job, being "insulation" that breaks down at a specific voltage e.g. 200V before regular insulation fails. MOVs can do that too. That would be placed between hot and neutral, arresting the spike to neutral instead of to safety ground; as a result currents would be equal and the GFCI would ignore it. A capacitor might also help, being able to absorb some current from the inductor.

Was the fridge cleaned recently? With dish washer detergent or even with a spray?

Those substances can reduce the resistance of surfaces since they have ions and tensides. F.e. the cover of the inner light sometimes has holes where the spray may reach metal parts with main power resulting in a leakage current.

This leakage current does depend on the moisture of the surface, which might be getting higher after opening the door. The warm room air level can enter the fridge and will be cooled down. After some time, the water can not be hold within the air anymore and the water damp will be condensed at the cool surface - just like the drain water of an A/C.

Cleaning with destilled water or isopropanol may help. If the compressor area is accessible, a cleaning of that part may also help.

After cleaning with/spraying isopropanol, the fridge must be kept unplugged after all alcohol is gone and the fridge is ventilated.

While the other answers are good, usually dust and debris accumulates on the coils at the bottom of your refrigerator over time that causes your compressor to work harder. Try lifting your grill at the bottom and dusting down there. If it's too dirty empty your refrigerator and put it on a dolly and tip it so you can see the bottom and have a second person really clean it with a broom and damp rag. That should get it working efficiently again and probably stop your gfci issue too

25
Where should I NOT use a GFCI or AFCI?
3
Running new fridge line, get regular breakers, AFCI, combo with GFCI, GFCI outlet, etc?

0
GFCI outlet keeps tripping
1
Is it possible for a microwave to damage outlets and after a while cause a breaker to pop under load?
1
Fridge started intermittently tripping GFCI after fan motor replacement
0
Troubleshooting GFCI Outlet Tripping
0
I'm getting a fake short on my fuse tripping GFCI
3
Fridge tripping GFCI Outlet
1
Fridge on non-GFCI circuit. Does it need its own circuit/breaker?
0
Fridge Tripping GFCI but not when compressor is unplugged