I purchased a USB powered (5 volts) LED lamp that included a controller with (from bottom to top in the picture):

I am attempting to put an in-line toggle switch to control the power to the lamp, but I'm facing an unexpected result.

How can I override/bypass/circumvent the power switch on the controller/board? I want the toggle to control the circuit closing and opening (the lamp being on or off). I'm hopeful its a simple as moving the toggle switch 'after' the controller, between the controller and the lamp, and not messing with the white (data) wire, just cut into the power (red and black) wires. Any advice is appreciated as I'm sure my description of the problem reveals my novice skill and ability. 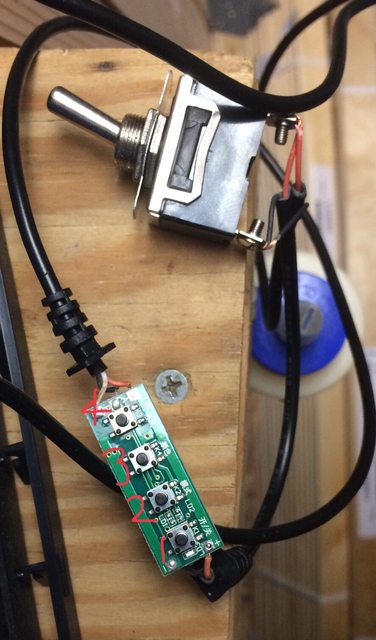 Yeah, this is a "throw parts at the problem and hook stuff up randomly" type deal. There is a significant knowledge gap here. Not least you did not notice the circuit is on with the switch off, that shoulda been a giveaway that you had it wrong, and you should've stopped right there and done more research.

The way a switch works is it either shorts out its two terminals, or it does not.

With the switch on, you are shorting out all four black and red wires to each other. This is creating a dead short to the power supply, forcing it to crowbar, because it's a smart supply with protective circuits. Had it been an old style transformer, you would now have a transformer glowing cherry red-hot.

With the switch off, you are using the two terminals of the switch to carry power from the 5V supply onward to the LED controller. Which is then functioning normally, but, 24x7.

Experiment... since it's only 5 volts DC

Now, take the loose red wire, and short it to the terminal that has the other red wire. What happens? Ah, the LED system turns back on!! (or at least, is now turnable on).

Of course, you'd have to stop using it to splice the black wires, then, wouldn't you. You'd have to come up with another way to join those.

The better way to do that

Of course, once you have the switch wired correctly, which I trust you will figure out, you notice something still. Everytime you shut off the switch, the LED controller forgets where it was. It forgets last brightness and color. That's because it's not designed to be turned off at a physical switch, it has a soft switch (#1).

So if you want it to stop forgetting, you must power it 24x7. So how do you physically turn off the lights? You can use the "switch to interrupt a wire" method on the common wire for the LEDs. As it happens, I can read the PCB traces and I see the red wire (on the top side of the board) is the common wire. That is typical; red is conventional for + voltage, and LEDs are positive common.

So if you install the switch to interrupt the red wire (of the 3 wires), then the LED controller will continue to remember and output what you last set, but the switch will prevent the LEDs from actually lighting.

You can try to switch one of the wires on the other side of the control board, but you might end up in the same situation. The circuit that powers the control logic might depend on the any or all three of those wires going to the lights. If that's the case, trying to switch any of the wires might also cut power to the logic control.

Since you don't know much about the electronics that control the light (and neither do we at this point), the quickest thing to do is try to switch the other wires and see what happens. You might be able to bypass the controller - just be prepared to get the same results as you have now.

Without ground, both data and power will present to the controller as disconnected, ensuring you don't get leakage from the data line causing faint blips when off. It's a one-way communication, controller to led, so the leds won't be missed.

ot: it doesn't look like that switch is wired correctly, you only want to switch one wire. It looks like it turns on and off because on it's invisible to the circuit and off it short-circuits the supply.

Not the answer you're looking for? Browse other questions tagged switch led rewire or ask your own question.

1
Is it possible to power/turn-on LED lights through a lamp switch?
2
GFCI receptacle works partially when switch is turned off; not at all when on
2
dimmer switch for both low voltage LED and leading edge at the same time?
2
Wiring a ceiling fan and light switch with two three-cable wires
1
Floor lamp with LED chip not responding to wall switch
0
LED, 2 way switch wiring not working
1
Motion sensor with bypass switch?
2
How do you connect a long string of LED strips to power at both ends when including a controller?