If you can use duplex breakers, is there ever a reason not to?

In general, when circuits need AFCI protection (or GFCI protection if you don't feed everything through GFCI receptacles), you can't use duplex breakers, since there's not enough room for the protection circuitry. However, when they don't, is there any reason not to use as many duplex breakers (or quadplex breakers if MWBC's are involved) as your panel will let you? In other words, is there ever a reason to use a normal single-pole breaker when your panel can still take more duplexes? I ask because I read here a lot that panel space is precious, but I also see a lot of normal single-pole breakers that could be duplexes.

In addition to any limits that your loadcenter places on the use of double-stuff breakers, there are also limitations on the breakers themselves due to the smaller effective frame sizes involved. As you have noticed, one of those limits is that double-stuff is incompatible with AF or GF functionality, or with other special functions/ratings such as the HID rating used in some commercial work for breakers that are used to switch heavy lighting loads on a frequent basis, or the Switching Neutral function used for fuel pumps and some generator transfer situations for that matter.

There are other restrictions in play here, though, and chief among them is that the smaller frame size sets an ampacity limit on double-stuff breakers. While a 1" or 3/4" frame can normally handle 125A/pole, double-stuff frames are limited to 50A/pole for 1" breakers (HOM, QP, BR, THQL) and 30A/pole for 3/4" breakers (CH, QO). Furthermore, double-stuff breakers are also limited in terms of their ability to interrupt large amounts of short-circuit current. This isn't an issue in most light-duty situations, but their 10kA fault current limit becomes a consideration in multi-family and commercial work where larger services are found.

Finally, double-stuff breakers are limited in their ability to accept breaker accessories; for instance, they can't be used with generator interlock kits and require special lockoff devices. This also extends to electrical accessories, as these breakers are not available with features such as shunt trips that can kill the power remotely or auxiliary/alarm switches for indicating the status of the breaker to some automation system, either.

There's no real cost savings. A double-stuff typically costs a bit more than its component breakers added up. They're harder to make, and more useful, and that's reflected in the cost.

Further, some quadplexes are not common trip: The outer sets often aren't, and the inner sets sometimes aren't either. That makes them unfit for 120/240V split-phase loads such as dryers and ranges (and who really checks for that?) Further, I doubt the effectiveness of the outer breakers' handle-tie. I suspect they have enough slack that you can forcibly tram them to leave one turned on. That defeats the common-shutoff rules for 240V and MWBC circuits. 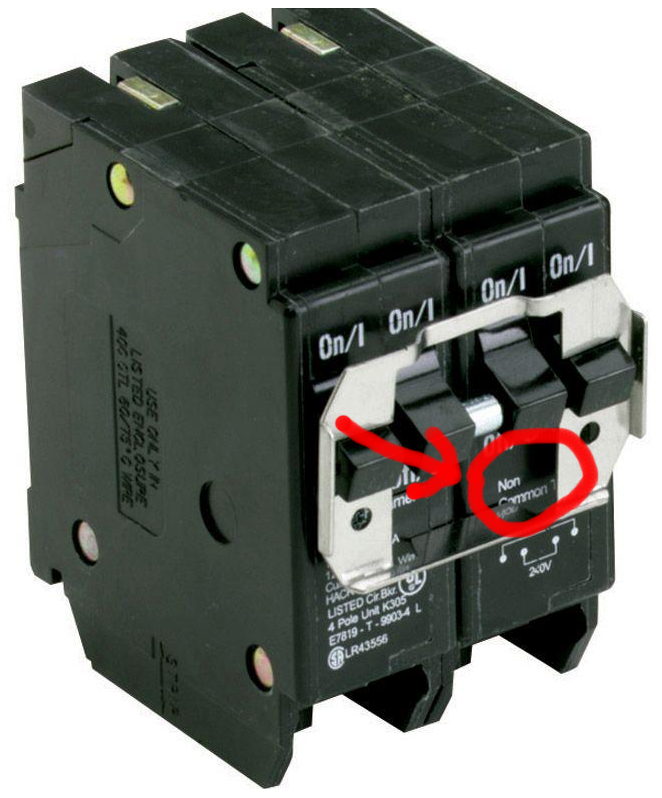 You hit stab limits sooner. A 30/40 breaker with a 30/30 across from it, will exceed stab limits for those stabs. Before you say "that's improbable", a bog-standard electric house has 40A range and 30A dryer, W/H and A/C. People tend to put the 240V loads at the top of the panel, so using those very breakers in the top 2 rows seems perfectly natural.

It's a really easy way to paint yourself into a corner. It's not the double stuffs, per se: Let's suppose you have a 30-space main and a BR 24-space/40-circuit sub in your garage. Someone hands you a BQ220230 outer-tied quadplex, perfect for the compressor and EVSE you're just now fitting. Fine, why waste the breaker. The problem is the slippery slide: Once you're comfortable with double-stuffs, you start thinking it's clever to get small panels. Now you're painted into a corner: either the inspector pinches you on AFCI or 2-pole GFCI requirements you forgot about, and you don't have room for the right breakers. Or you need more spaces, but can't create them with double-stuffs because you already did. In other words, double-stuffs are bad when they become a substitute for a large panel.

Anyway, NEC 2020 is the sunset of double-stuffs. AFCI/GFCI are not made in double-stuff because they just won't fit. NEC 2020 effectively outlaws double-stuffs: every 240V circuit <=50A must be GFCI, the only practical way to do that is with a GFCI breaker, and like ThreePhaseEel says, double-stuffs >50A do not exist, so you cannot use a double-stuff for a subpanel feeder. So there is no longer any opportunity to use double-stuffs in 240V. Further, virtually all 120V circuits now require AFCI, and that's to protect wiring, so it must be at the panel. AFCI is totally unlike GFCI, you can't use receps and call it good. So what's left that you can double-stuff? Not much.

2
What options are there to achieve both grounding/ground-fault and arc-fault protection on old 2-wire circuits?
2
Upgrading 2 breakers to AFCI, always trips
2
Is it possible to make space for a double-pole breaker in this panel?
4
What are good uses for tandem (double-stuff) breakers?
1
Wiring Options for 14/3 NM-B Cable and Two Single Pole 15 Amp Circuit Breakers
3
Was it ever acceptable in the past to use 20A breakers with 14 AWG wire?
1
How many subpanel breakers can a single piece of main breaker/bus support?
1
Twin breaker allowance
1
How do I add 2 AFCI circuits to my panel?