What kind of bolt is this? (securing the garage door opener rail to the wall face) 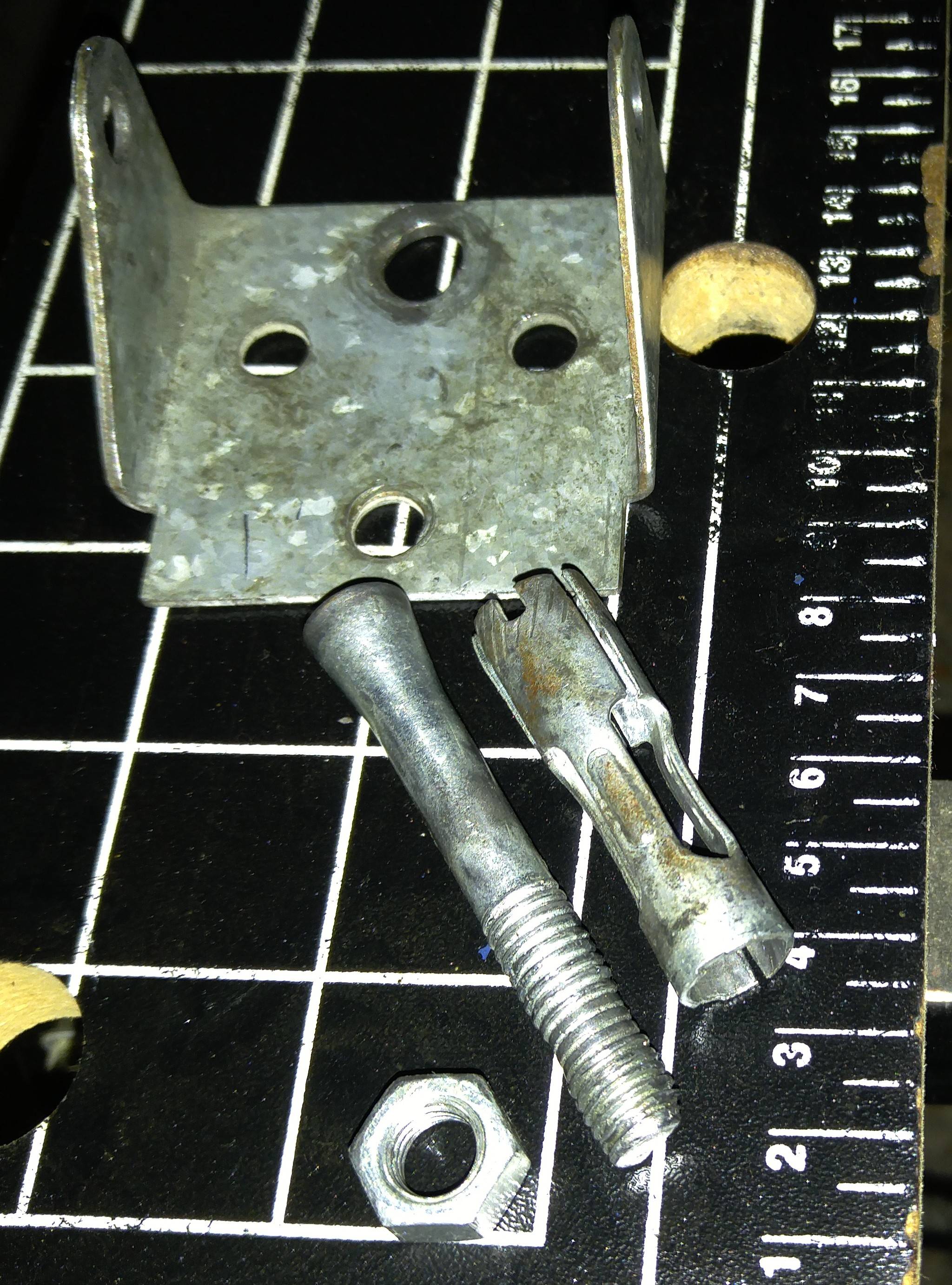 Probably in place for half a century, over the years it got increasingly loose, wiggling around a lot but still difficult to remove due to the expanded sleeve. Lately, I noticed problems with the garage door opener and chain vibrating a lot and managed to pull out the loose bolt this time. Now I'd like to know:

Is a hole drilled in concrete, and the bolt and sleeve inserted, which then expands as it is tightened? Or should they be stuck in concrete when wet and allowed to cure?

The latter seems like it might not allow the expanding functionality of the sleeve to work. Since there isn't concrete residue on the bolt and sleeve, I'm guessing the former approach was used?

Also, I'm thinking there should be more than one bolt, but that's for another question... 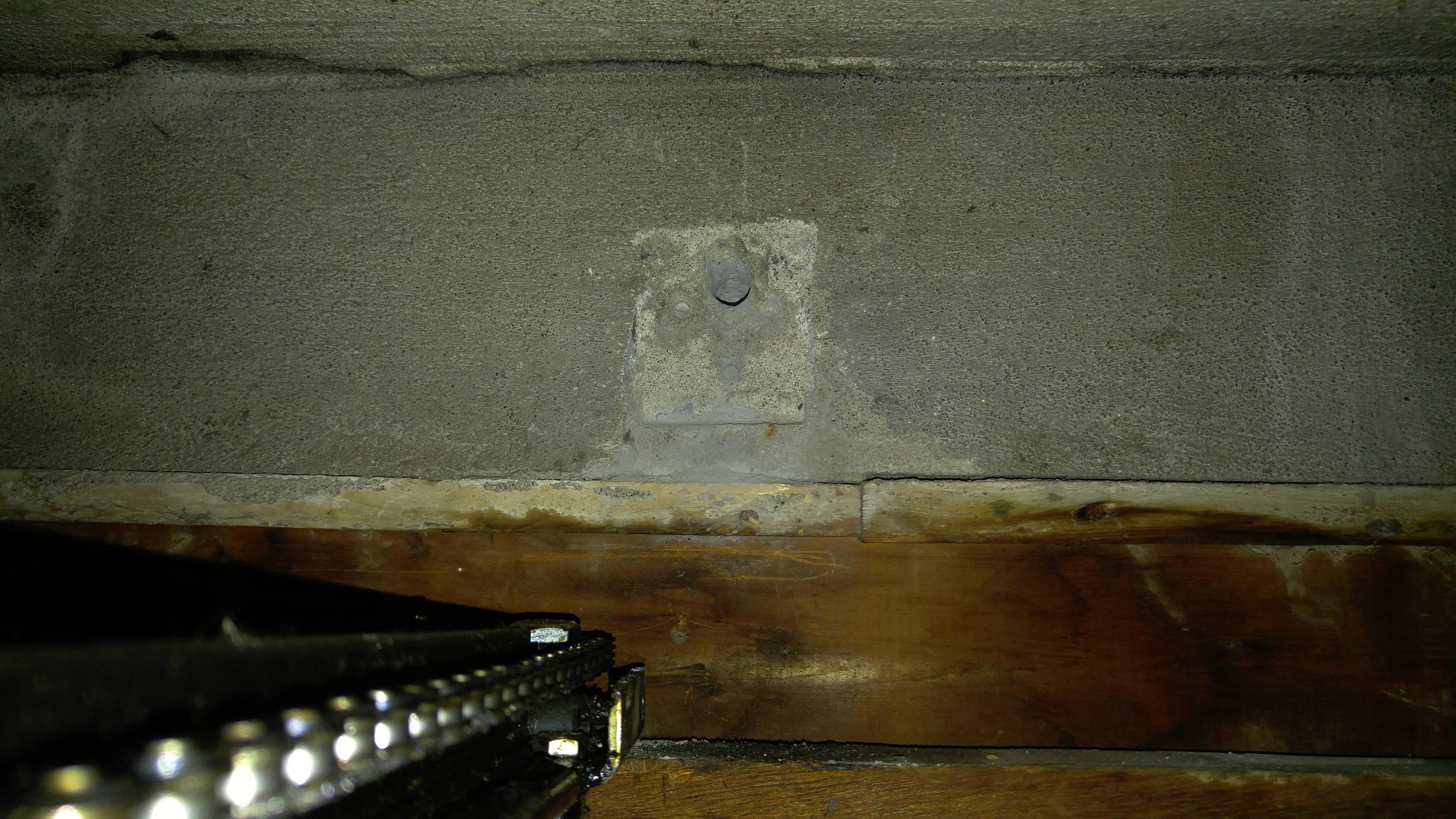 Some close-ups, showing the main over-enlarged hole and three other unused shallow holes. Note also that due to the loose bolt, the mounting plate rocked vertically and created a wedge shaped indentation in the concrete, allowing/causing even more rocking. 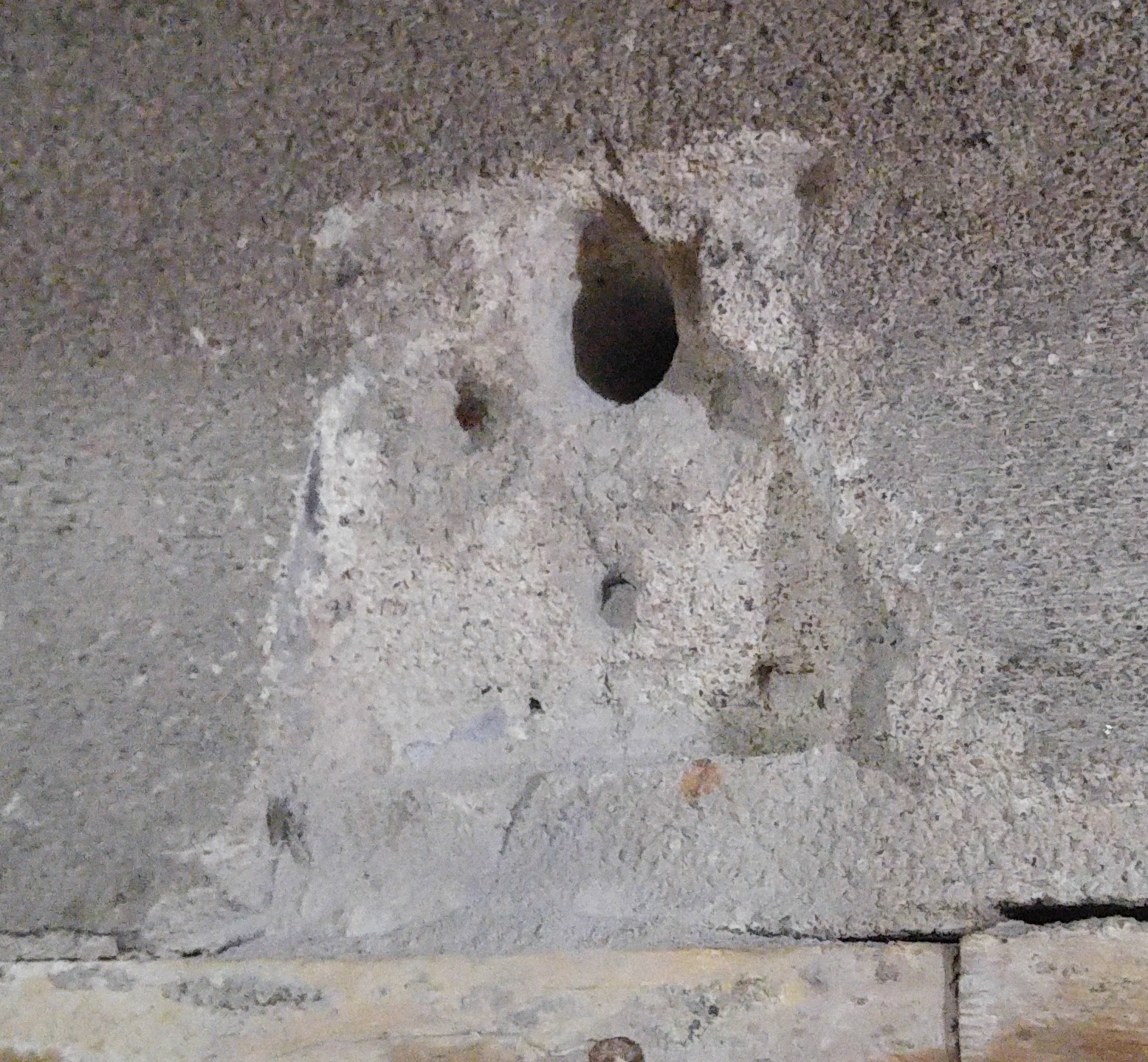 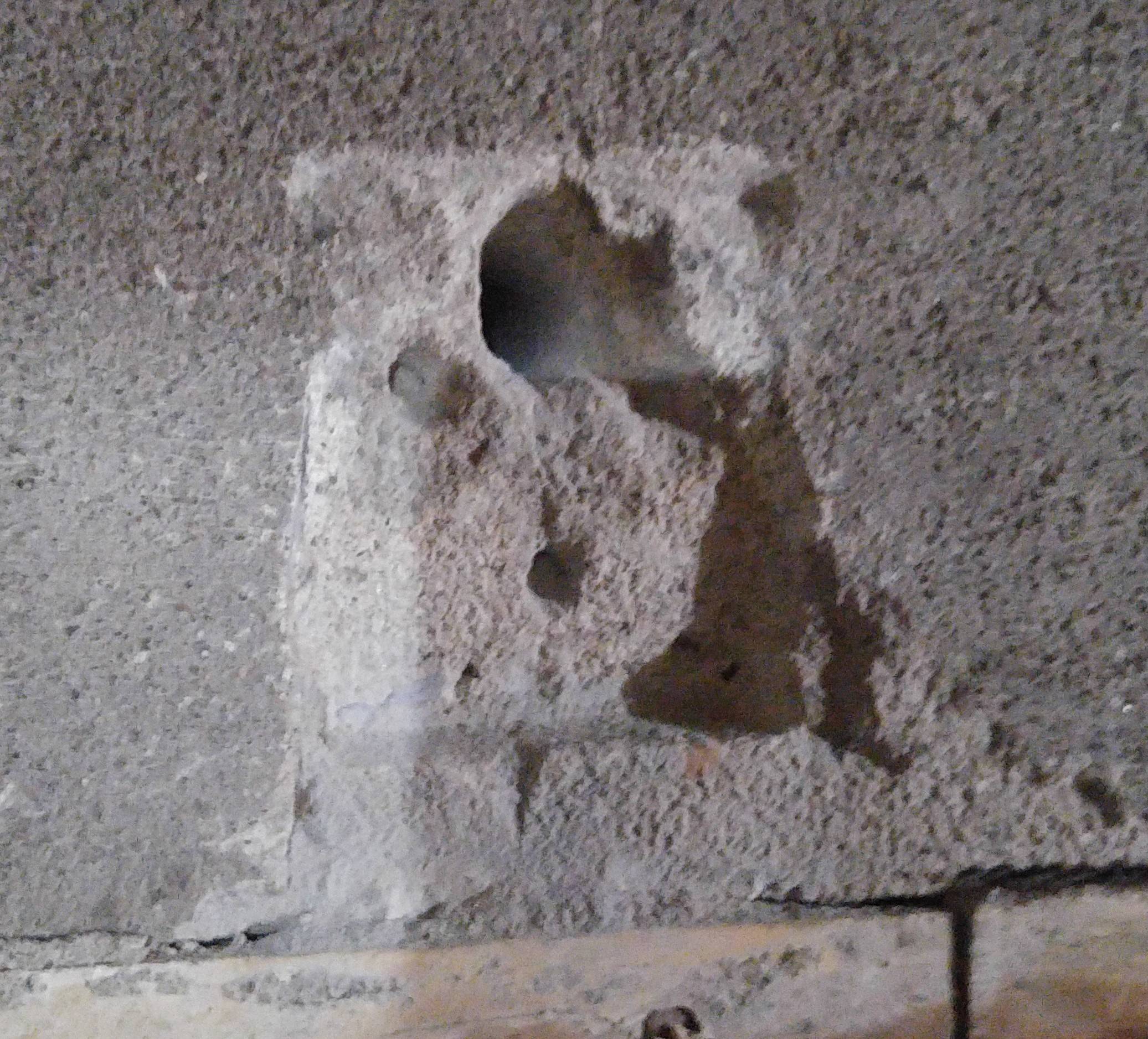 It is a concrete sleeve anchor, many brands with similar names. You drill a hole, then pound it in, then twist the nut a few times to set it. If it has wiggles out then the hole is probably damaged and now oversized.

You might find it best to now set a replacement deeper wedge anchor, or maybe set with a bit of epoxy.

I don't remember what brand I was using, but somewhere instructions said to space at least 5x the diameter apart.

NoSparksPlease answered your question about what type of bolt you had.

I have always has better luck with lag shields and lag screws. They just seem to have more gripping power. Two 3/8" lag screws and two lag shields 2" long would be all you'd need. The drill size would be listed with the actual lag shield. With any luck, you might find a shield that fits into the existing hole but I'd still add the second one. 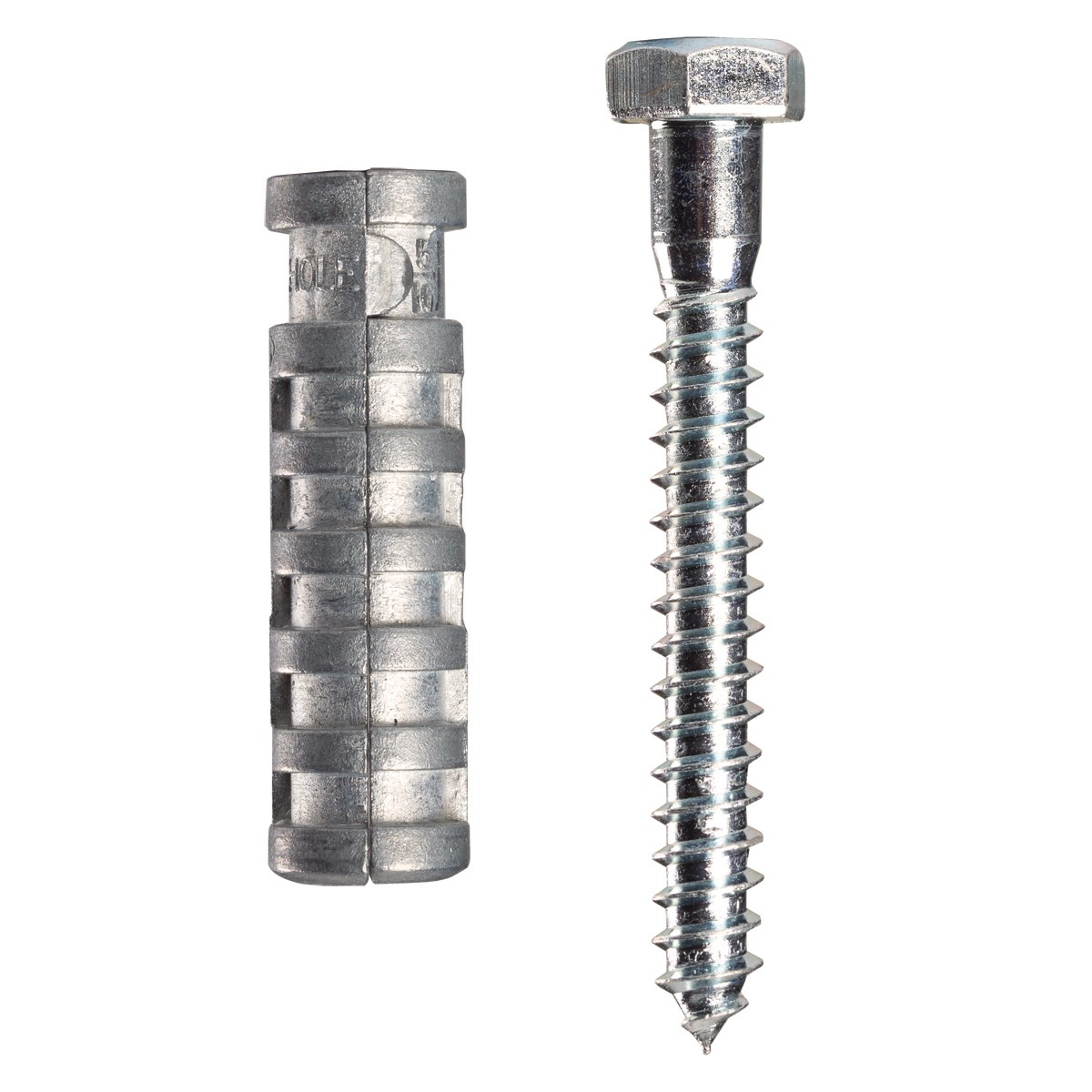 You could also, as an alternative, mount a 24" piece of 2x6 up there with 4 lag screws and shields and then screw the bracket into that with some 1 1/4" lag screws. Just a thought.

You don't need to use the same type of bolt. This is just one type of retrofit connector for concrete. I say retrofit because it is installed after the concrete is cured, even if installed soon after. It appears that a piece of the bolt is broken off and still in the hole. The end of the bolt should have a bulb shape to it.

I can't comment on what the bolt is for or if you need to replace it. More pictures would help. However, it's probably there for a reason. To repair, you could use the two next lower holes to install bolts, this would allow for drilling new holes. You could use various techniques to attempt to get the broken metal piece out of the existing hole and reusing the hole. Using epoxy is an option.

I would suggest taking the pieces to your LOCAL hardware store, not a box store, but a local old school type where they know their stuff and want and can help you

Not the answer you're looking for? Browse other questions tagged concrete garage-door-opener bolts or ask your own question.

0
How to mount header bracket for garage door opener to concrete wall?