Are gaps above and below framing members a concern?

I recently hired a framing crew to frame a new house. After it was done, I commissioned an independent review. The reviewer described some of the work as "shoddy," and pointed out a lot of gaps, particularly between king and jack studs and the plates. I took photos and added his notes to a few studs he pointed out. He also pointed out that the roof beams weren't birdstoothed, as the plans directed, but were instead set onto the headers and strapped to scrap lumber. In one place, the beams are strapped to a split 2x4.

Would it be appropriate to ask the framers to fix some of this work? I don't work in construction, but even as someone outside of the industry I'm looking at this and it just doesn't look good. 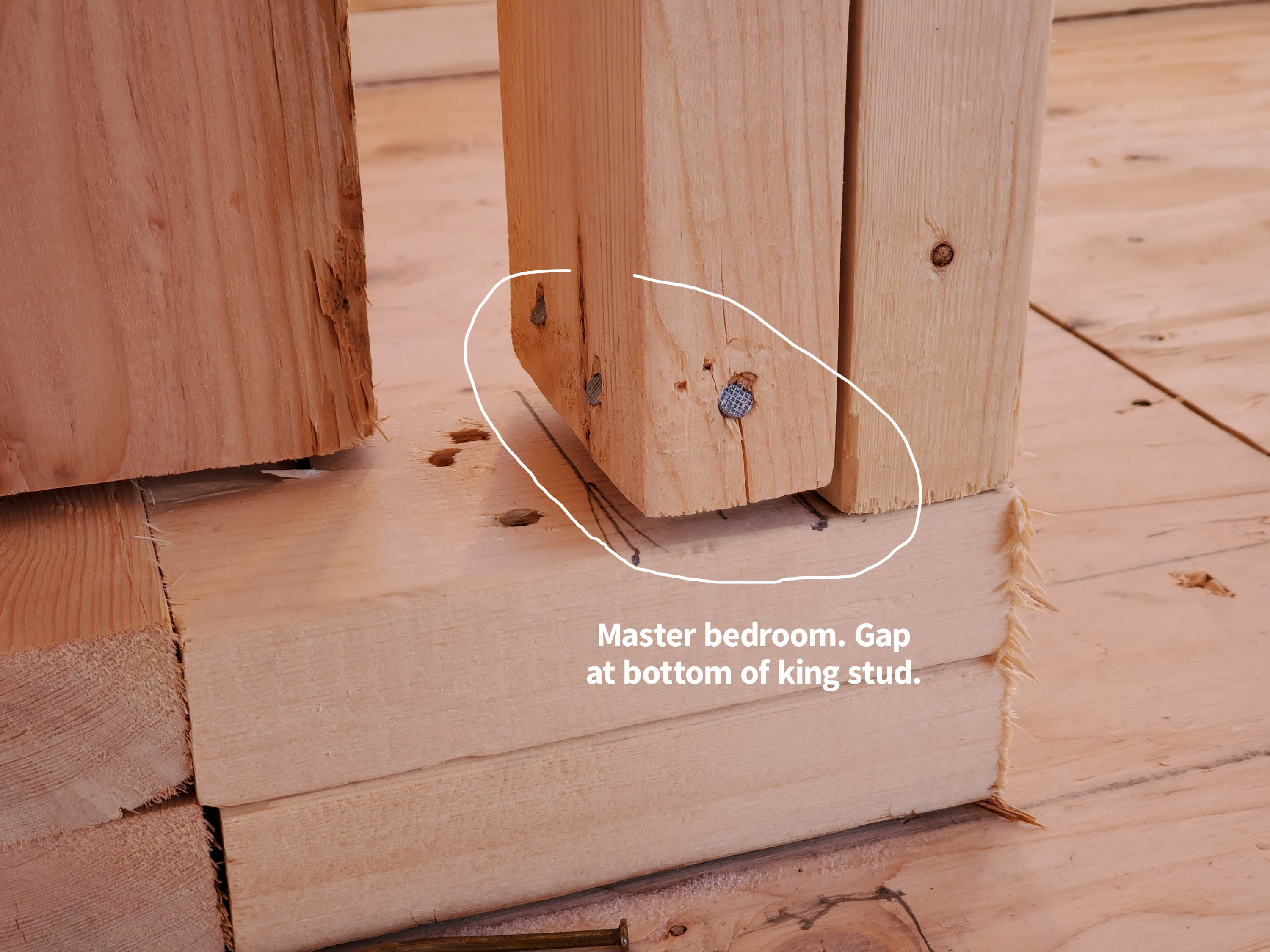 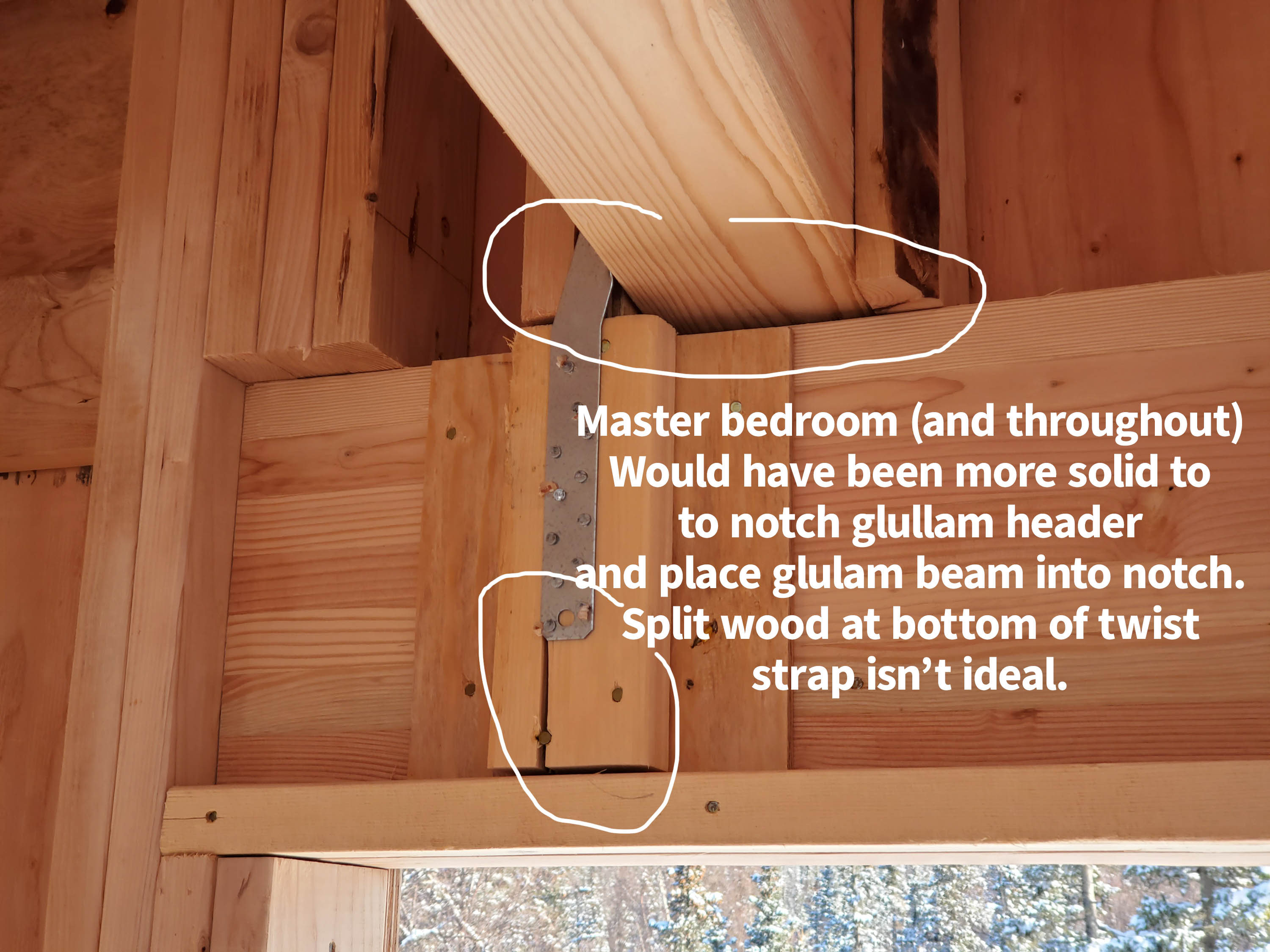 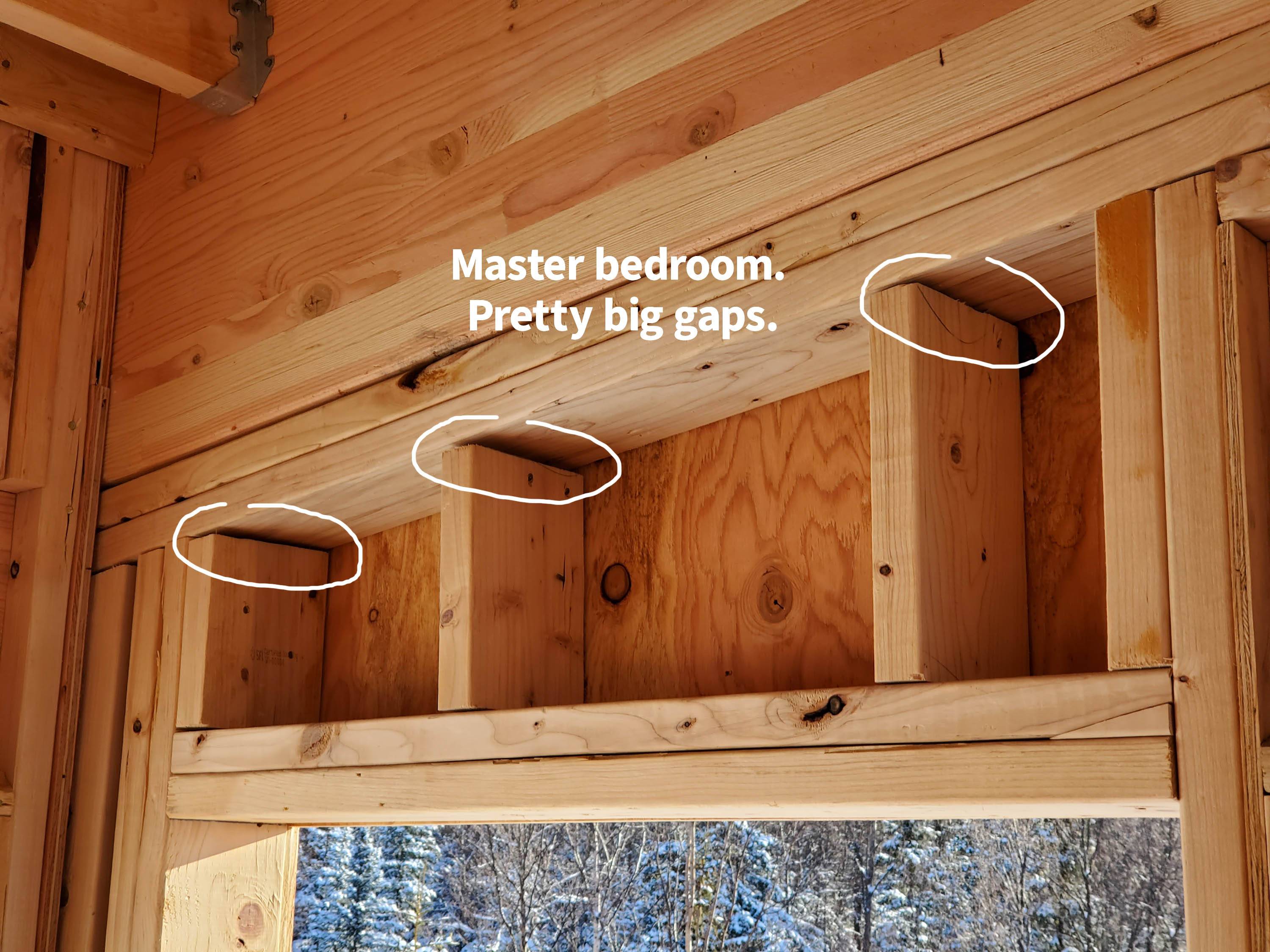 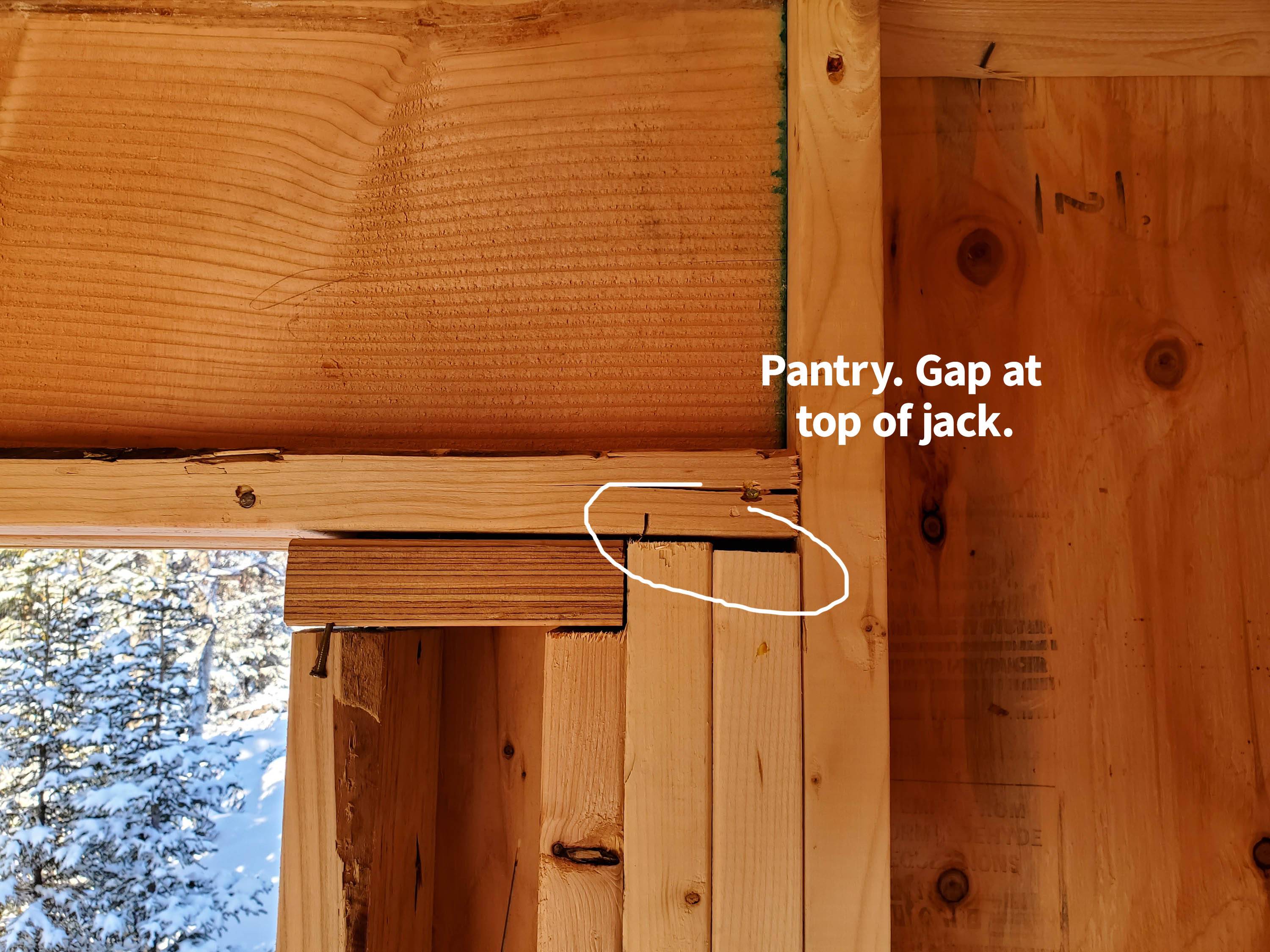 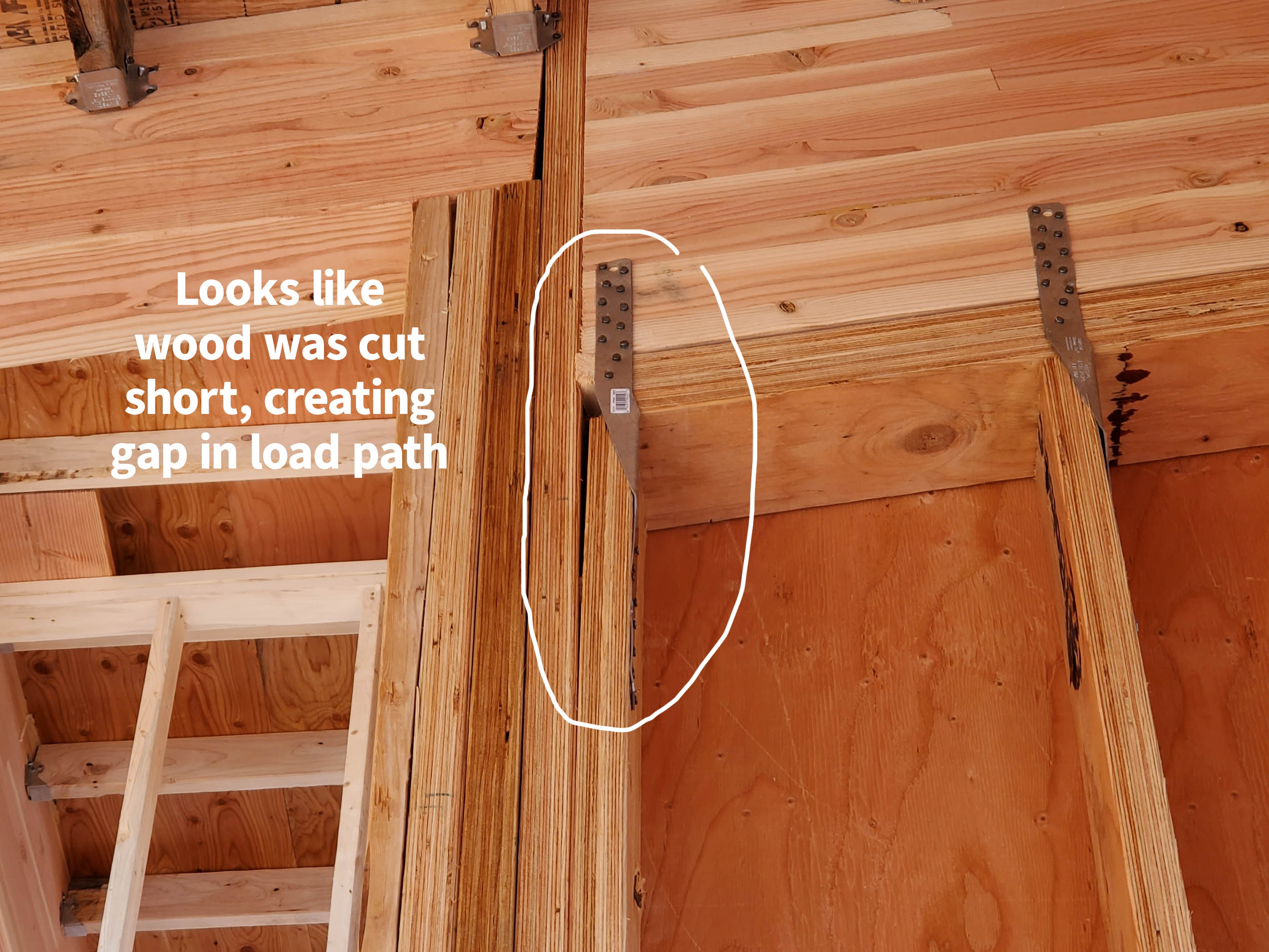 Edit: Here is an album showing many additional photos: https://imgur.com/a/WRBO1is

I always wonder “what else is wrong” when there are so many obvious errors.

You’ve noted the obvious problems, but you’ve probably missed some major items that are not so obvious:

I agree with Greg Hill and “upvoted” his answer that you must get these things fixed before you proceed or you’ll be paying the cost to replace anything installed later.

There appears to be a pattern of careless work and failure to abide the requirements of the project documents. It's going to be ugly to fix, but if you want to have it fixed, now is the time. If you allow construction to proceed then any work done by other trades which has to be re-done on account of the framing defects may be at your cost, not that of the framers.

But things like this turn into squeaks, cracks, wobbles, etc. over time. So yes, if this was MY project I would get them back in to do it properly!

I don't think "I commissioned an independent review" will hold any weight with the contractor, unless the contract allowed for that. The contractor might dispute the qualifications of your reviewer. Instead, I would contact the local city planning office (who gave you the planning permission), and ask them for an inspection. If they say that rework is needed before they'll pass the framing, then rework is needed.

You need to be looking very closely at what standards are written into the contract, and you may end up needing an attorney on this. If you spotted these shortcuts (literally, in some cases), then what else have they done which you have missed?

Check your plan general notes for your code and other criteria to which your contractor's quality of work must meet. Discuss with your building official, or a local structural engineer for advice and direction.

From what I see in your pictures after a very quick precursory review, it appears that some of these items do not meet code and do need to be addressed (for examples: inadequately installed uplift straps; excessive gaps). Re the gaps, in the best case, there will likely be settlement of structure until full contact which will result in aesthetic issues.

Yes, I suggest pursuing this and now, before you close up and before you pay your contractor

Yes, and I'd question your town inspector as to whether or not that would pass. You're looking at loads of problems down the way.

Birdsmouth cuts are a PITA but after you do them a few hundred times they're easier. No excuse. And every single one of those 2x4s that aren't framed solid are going to move in time, causing cracks, settling, squeaks, and problems. Get it fixed before you drywall.

Licensed and insured contractor, been building homes for the last decade or so. That beam in the last Pic is sitting on lvl studs, not plywood. They're much stronger than regular 2x material and that strap is kinda hiding the end of the top plate but technically all it needs is 3/4" bearing to be structurally sound. That gap in pantry king stud, while ugly, won't affect anything cause load transfer on trimmer is still solid. To someone responding above, this definitely is 2x6 framing. The master bedroom window picture with the gaps - that top plate is at an angle and they didn't bother to cut that bevel on the cripples, so it's touching on one corner but a big gap on the other. The things I'd be most concerned about have already been mentioned, that bottom plate in the first picture should not be that short... It's literally begging for problems later. Also the beam strapping. That split wood with a couple nails in it that the strap is teco nailed to its absolute garbage and holding nothing. The rest of it, while it looks like garbage and I'd never leave work like that in a house I build, probably won't cause significant issues... Last thing I'd worry about are the problems you didn't see and don't have pictured here. The inspector should definitely catch all these problems and call the framers out on them and make them fix this before anything further can be done. That's how it's supposed to work. Break ground - inspection, lay pipes and such - inspection, build forms for foundation and tie rebar - inspection, pour foundation - inspection, build pony walls (if applicable) - inspection, framing - sheer inspection, finish framing - full framing inspection, insulation - inspection... There should be inspections literally every step of the way to ensure that this kind of garbage doesn't fly. Inspectors are usually cool with problems and will provide a simple way to fix the problems. Hopefully you don't have too many issues getting them to fix the problems.

Any gap under the king stud or anywhere in framing is a result of the framer doing crappy work, because everything in framing has to be on the line and flush and tight. If it's not then the house will shrink and creak, and drywall will crack.

At the minimum all gaps need to be filled underneath With a piece of lath or piece of plywood as long as its solid underneath the entire width and langth of the beam or king stud or cripple its sitting on . it will pass structural if those are filled and prevent sagging in the future hurrrican strap should have been nailed to a 2ft piece of 2x10 and 2x10 nailed minimum 18 3" nails Door Jack's are not a big deal but you could add one beside it and nail them to existing once So its solid.

What is the issue here? In my area, most of that is not how we frame things (code wise) But - I can tell you for a fact that that none of those gaps shown are compromising the strength of the structure, anyone who frames and builds everyday knows that.

2
Load considerations on framing members that are only attached to concrete?
2
How can I support both floor joists and roof trusses while I replace wall framing below?
0
After 1 year, how much gap between members is acceptable in light framing?
1
Window framing gaps and split wood
2
What are these nail strips above and below windows?
1
How to fill 5 inch deep gap above and below window on internal wall
0
Are missed nails and gaps between members a concern in new construction framing?
1
Are the electrician's holes in my framing a structural concern?
3
Modifying load bearing studs