I'm trying to improve the lighting in my garage. Currently it has several simple bare-bulb lampholders, and I am installing larger hanging LED fixtures that have a cord with a plug.

Initially, I tried using an adapter that screws into the light socket. Unfortunately, this does not make proper contact with the center terminal of the socket, and the plugged-in light fixture did not initially work. I attempted to bend the center terminal out slightly to make better contact. That worked for a while but the light stopped working after just a few minutes. If I wiggled the plug, the light would flicker and I could hear arcing inside the fixture - not good! Reading reviews of several similar adapters, this seems a common problem.

I purchased some Leviton 1228 receptacles which are designed to fit a round electrical box. Unfortunately, when I went to install them, I found that the existing electrical boxes have the screws at a 2.75-inch spacing instead of the more common 3.5-inch spacing. This simply does not fit, and I have not been able to locate any similar receptacles that would fit.

I have considered replacing the fixtures with lampholders with built-in outlets (which do have the spacing). However, I do not want to have an empty socket or install bulbs in these locations. I'd also prefer not to cut the plugs off the end of the light cords and hardwire them into the box.

Are there receptacles that are designed to fit a round box with 2.75 inch screw spacing, or some other good solution to connecting these light fixtures?

A picture of the situation would be immensely helpful.

Anyways, if the ceiling is not finished then I would upgrade to standard sized electrical boxes; it would cost a grand total of about $3 for the box, outlet, and plate.

If that is not possible then get an oversized cover and drill the holes yourself. See this Amazon review 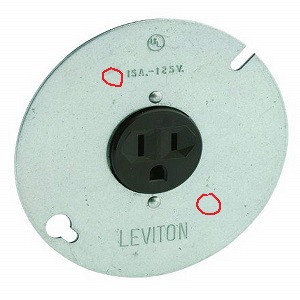 What you want is available if you are willing to order parts and put it together. The starting place is a single round outlet such as the Leviton 5258-SS. 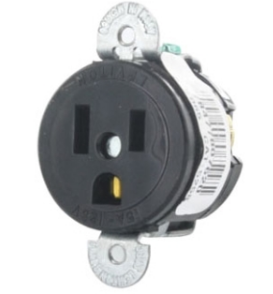 Then you need the smaller sized 3.5" cover plate with 2.75" mounting holes. The above outlet mounts into the plate. 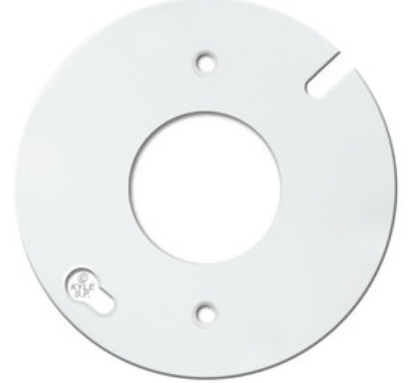 See picture sources for possible suppliers. To mount the 5258-SS into the shown cover plate you would need to drill your own holes. The existing device holes in the plate have too large of a dimension.

You can install one of these light sockets. 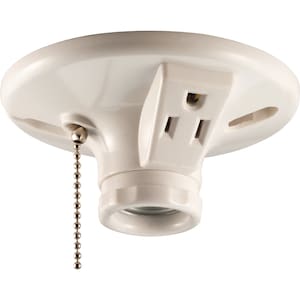 Not the answer you're looking for? Browse other questions tagged receptacle light-fixture or ask your own question.

4
Can a standard NEMA 5-15 outlet be installed in a round ceiling box?