Any US building codes about a door opening into a hallway near a stairway?

A while ago I changed a door out from my tiny bathroom so that it opens outside of the bathroom and into the hallway. It looks attractive and provides a great deal more room in the bathroom making it feel much bigger now. It was also a great deal of work since I reused the existing door frame, chiseled new hinge slots and used wood putty to cover up the old hinge slots in the existing door frame.

Now that we are going to sell the house, a friend of mine mentioned that perhaps the house was purposely built for the door to swing inside the bathroom because the door is close to the stairway and that it could be some kind of building code. The house was built in 1958 so if it were a code decision so long ago then I am sure somebody might know something about this. My father in law is pretty handy but has never heard of such a building code.

I am terrified now that this might get called out in a home inspection and that if it were a code issue that I will be required to replace the door before I can sell the house. Is this indeed a code issue in the United States?

I included a rough diagram so that you can visualize this: 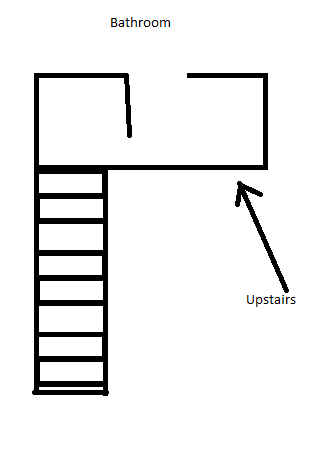 I realize that information this localized is not on topic for this forum, but I am a resident of Pennsylvania and according to the local building codes that user Sean Cheshire was so kind to give me (Thank you!), this was the only building codes in regards to stair landings that I could find:

R311.5.4 Landings for stairways. There shall be a floor or landing at the top and bottom of each stairway. Exception: Afloor or landing is not required at the top of an interior flight of stairs, including stairs in an enclosed I garage, provided a door does not swing over the stairs. A flight of stairs shall not have a vertical rise larger than 12 feet (3658 mm) between floor levels or landings. The width of each landing shall not be less than the width of the stairway served. Every landing shall have a minimum dimension of36 inches (914 mm) measured in the direction of travel.

It doesn't appear like the door swings over the stairway so I should be okay! Thanks everyone!

There's no such thing as US building codes, there are state, county, and municipal codes which vary widely between areas. The only way to know is to ask, which is what I'd recommend you do. There's no harm in it, simply call the office that is responsible and ask. You don't have to say you've already done it if you're worried about it, you could say you are planning on doing some remodeling and ask them if a door opens into a landing if that's OK and see what they say. Worst case is you have to turn it back in the way it was.

While local codes certainly vary, in general there's nothing wrong that I know of with that installation. Your door is not on the stairs, it's in the hall.

To correct an common misconception there are national / international codes. These generally form the basis of state and local codes.

The overriding factor here is fir egress which demands that doors open out ... there are exceptions. For ares with less than 50 people and more for less than 10. I have always joked that if there's a fire, you want the door to open out. If ya having a rush to get to the bathroom, you're gonna want the door to open in. No one ever rushes to get out. In homes, most doors open in due to the smaller hallways with would block the entire pathway if they opened out.

1
Is there code for door open direction
2
What are the code regulations for stairs off an exterior french door?

0
Changing straight staircase to a turned stair with half landing, is this the Only solution to stairs cutting loft in half?
11
Does it matter whether a bedroom door swings in or out of the room?
1
Framing a door ON stairs, 3 steps to landing?
4
What is the proper way to prevent water infiltration between exterior stairs and wall
1
What is code for stair treads and risers in Georgia
0
Adding an Interior Door on a Stair Landing
3
US Building Codes - Do I need a handrail on this initial section of stairs?
0
Optimizing tread depth, riser height, and tread nosing projection for a compact staircase