Can a wood fireplace be completely open without any boundaries and just a chimney?

I usually see fireplaces that are open only on one side. This would be a standard example:

The flames are surrounded by 3 walls and open on the one viewing side. Recently I've noticed some fireplaces such as:

These are open on three sides. Does this mean it would be possible to have a fireplace in the middle of a room that is completely open on all sides, with only a chimney? I suspect you would want some sort of protective screen for debris and such.

Yes - examples are out there. For practical reasons the chimney tends to be metal, or in older buildings, just a smokehole in the roof. 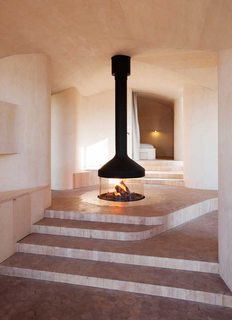 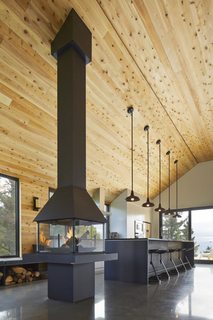 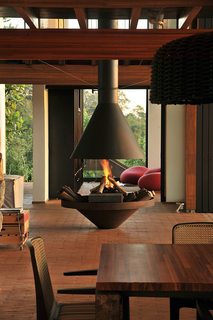 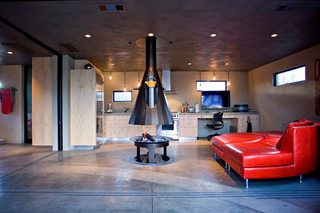 it's a simple matter of draft, and is the same way the traditional home brick fireplace like this works:

once heat is generated, and if the chimney goes high enough, an updraft is generated which is where all the smoke from combustion will go. In an open on all sides wood burning fireplace as long as the fire [pit] diameter is smaller than the chimney hood above it then all smoke will travel up that chimney. If you got a strong wind within the room then it can obviously blow smoke outside of the chimney draft and get into the room.

The protective screens... for wood burning fireplaces or pits is likely needed, and probably required by building code. Per your first pic of a traditional home wood fireplace, they usually do. I can remember embers from crackling wood flying out 5' onto the carpet even through the wire mesh screen, which is probably what led to the glass doors.

Place like a ski lodge, with a big concrete wood fire pit in center of room, with concrete floor and no combustible material near it, and a ~5' distance preventing people from easily getting next to the fire, is the shield. The updraft works the same.

gas fireplace with fake wood (which is what your pics are) produce basically no smoke the draft would work the same way which is where all the CO and CO2 and other clean combustion gases would go. I doubt those pics are of wood burning center room fireplaces... the type of people owning places like that would never dirty their hands touching cut wood much less carry it inside, those are gas fireplaces so it's much safer than wood. So that's how you can have an open design fireplace/firepit in the center of the room open on all sides, it's either natural gas or propane. And then I would assume local building code would provide various requirements as to what's acceptable.

Not the answer you're looking for? Browse other questions tagged safety fireplace or ask your own question.

3
How can I remove a fireplace insert without damaging the surrounding wall?
3
Can I convert a gas log fireplace to wood burning?
0
Can I burn wood in this fireplace?
4
How can I add a fireplace to an existing non-fireplace chimney?
2
Can I use a fireplace that is setup for gas to burn wood?
0
Is it possible to have the fireplace and chimney put up against a supporting/load bearing column?
0
Use wood stove in fireplae until the pipe is hooked up and chimney lined
0
Any tips for using an open hearth fireplace?
2
How to permenantly close and seal wood fireplace