How do I repair a broken wooden door jamb?

Is there a cheap and simple way to repair this damaged bedroom door jamb? The result should look nice, but need not be very strong. 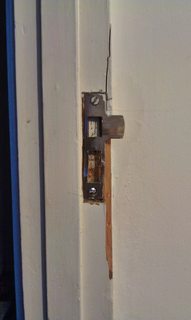 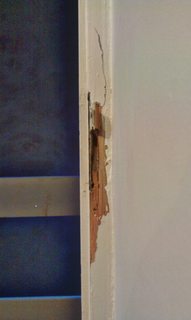 First of all, some terminology.

What you want to replace is called the JAMB.

You can either replace the whole thing (prefered) or try and fit a smaller piece in to fix the broken area.

With a utility knife, score the paint on both sides of the STOP (The thin piece that stops the door when it is closed.

Pry it off with a small prybar, slot screw driver or whatever you can wedge underneath.

Remove the casing (The moulding, attached to the drywall surrounding the door and threshold if there is one)

Now you can get to the jamb.

Remove the jamb, and go to your lumberyard and get a piece of pine that approximates it in dimensions. You'll probably have to have it planed to the right thickness, but you just might get lucky. For about $1.00 a cut, you can usually get them to cut it to the appropriate width. Length you can handle yourself, even if you need to use hand tools. (Although, depending as to how the latch jamb connects to the upper jamb, you may need to mitre the end.

Now you replace the jamb, Nailing it where the stop will cover the nails, and chisel out the mortise for the catch plate. You can usually just drill the holes for the bolt.

Replace the other pieces you took off with new nails. -- TIP: Don't try and pry out the old nails from the head. Grab them in a pair of vise-grips and pull the heads right through the molding. It's a lot easier.

You could also, instead of replacing the entire jamb, cut out the damaged section, and replace it with new, butting everything together. However, even with careful sanding and gap filling, you will see the horizontal lines where it's joined.

You could clean it up, fill the cracks and gaps with Bondo or a similar filler, sand it smooth and paint it. 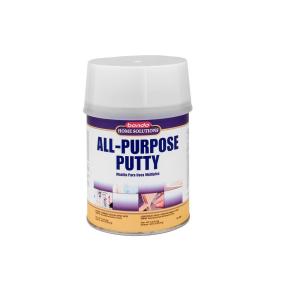 Not the answer you're looking for? Browse other questions tagged repair door-frame or ask your own question.

1
How do I replace a storm door when I have a cracked door jamb?
4
What are some tips for fixing gaps between door and jamb in an exterior door?
1
Exterior entry door repair
4
Is my kitchen cabinet door beyond repair?
1
How to repair solid wood cabinet finish after fire?
2
How can I fix this portion of sliding screen door track?
6
How can I smooth out a poor drywall repair?
1
How do I keep the door jamb moulding from pulling away from the wall when hardware is screwed in?
1
New door jamb is smaller than the one it replaced. Can I use it?
1
How to repair wall next to external door?