(An update is below the pictures.)

We just moved to our house in November and had to buy a new dishwasher. We had installers install it for us. A couple of months ago, we started noticing a bad odor around the kitchen sink area, and we couldn't pinpoint what was causing it. A couple of weeks ago we noticed the smell was triggered when we started running the dishwasher but not all the time.

The other day, I placed a cup of vinegar in the dishwasher and ran it, and there was no smell during that cycle. It returned when we filled it with dishes and ran it later that day.

I have noticed the smell at times when I walk into the house after going out. I have also noticed it at our laundry closet, which on the other side of the room of the kitchen. We did have a plumber come out once before we figured out a trigger for it, but he didn't find anything. Of course, the smell wasn't triggered, either.

We're on the city water lines and sewer. I'm attaching pictures of our kitchen sink drainage system. I really want to know how to get rid of this odor once and for all. Apparently, the house has a very potent smell at this moment but I'm not there right now, and the dishwasher is not running. 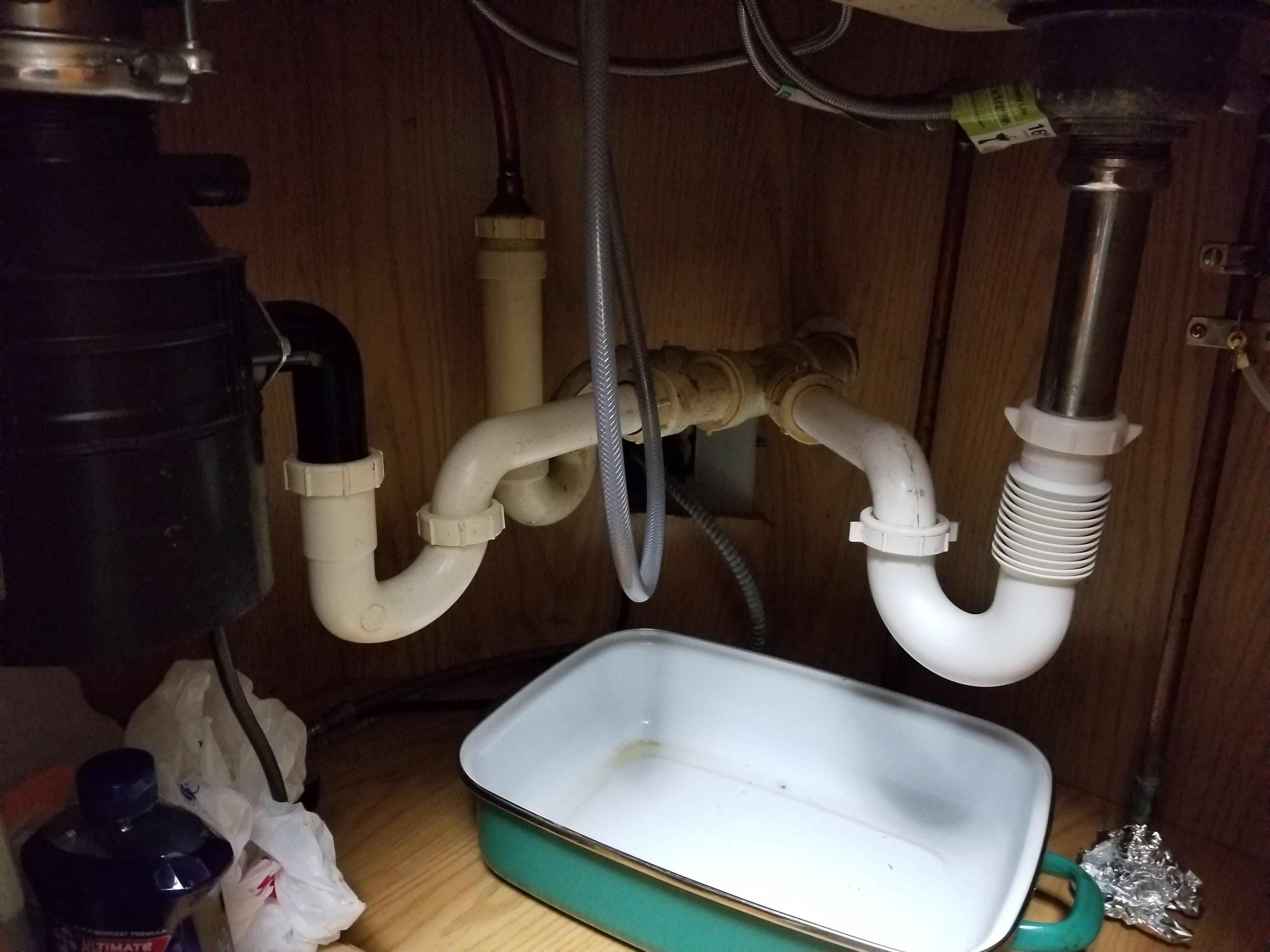 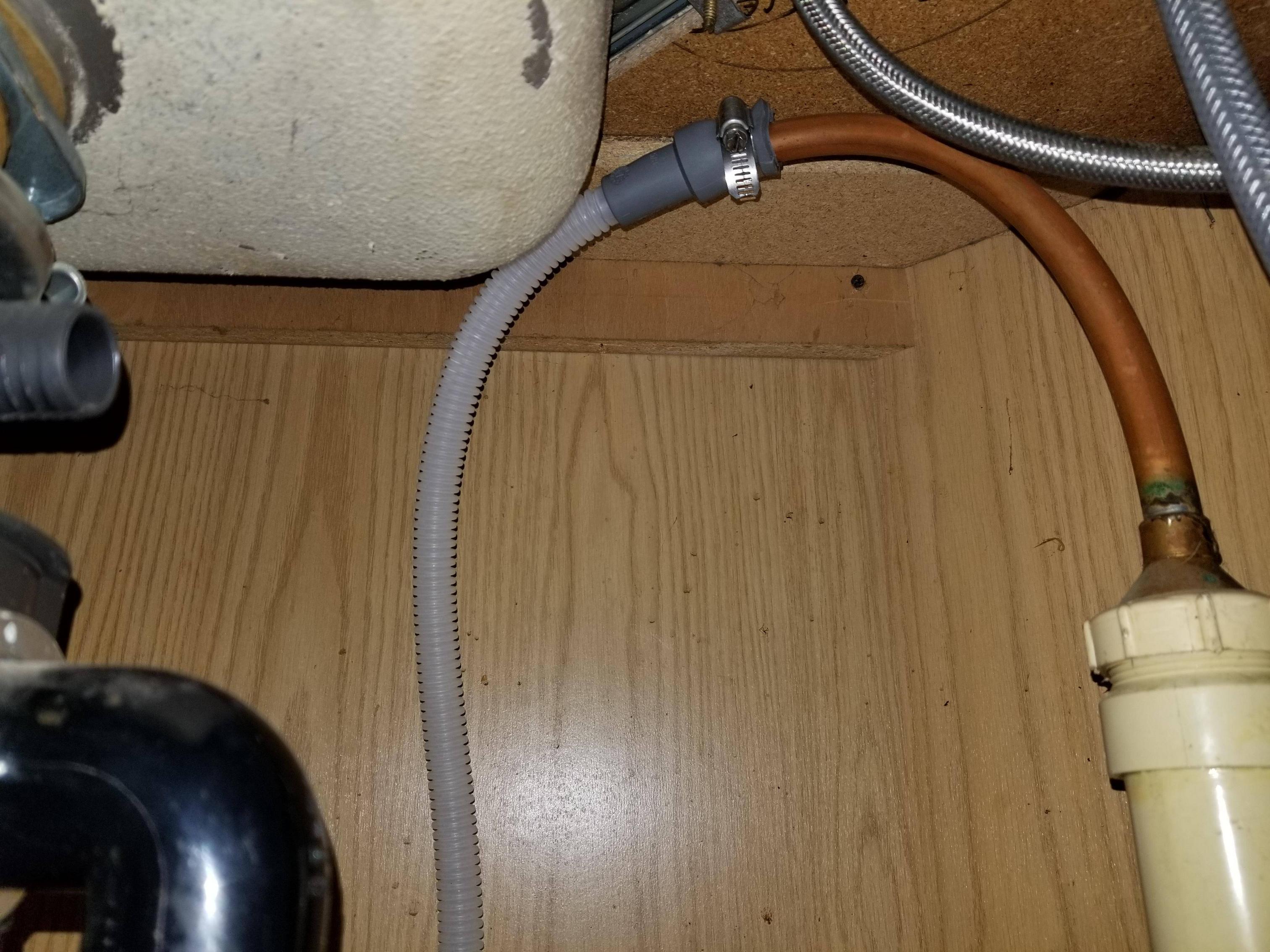 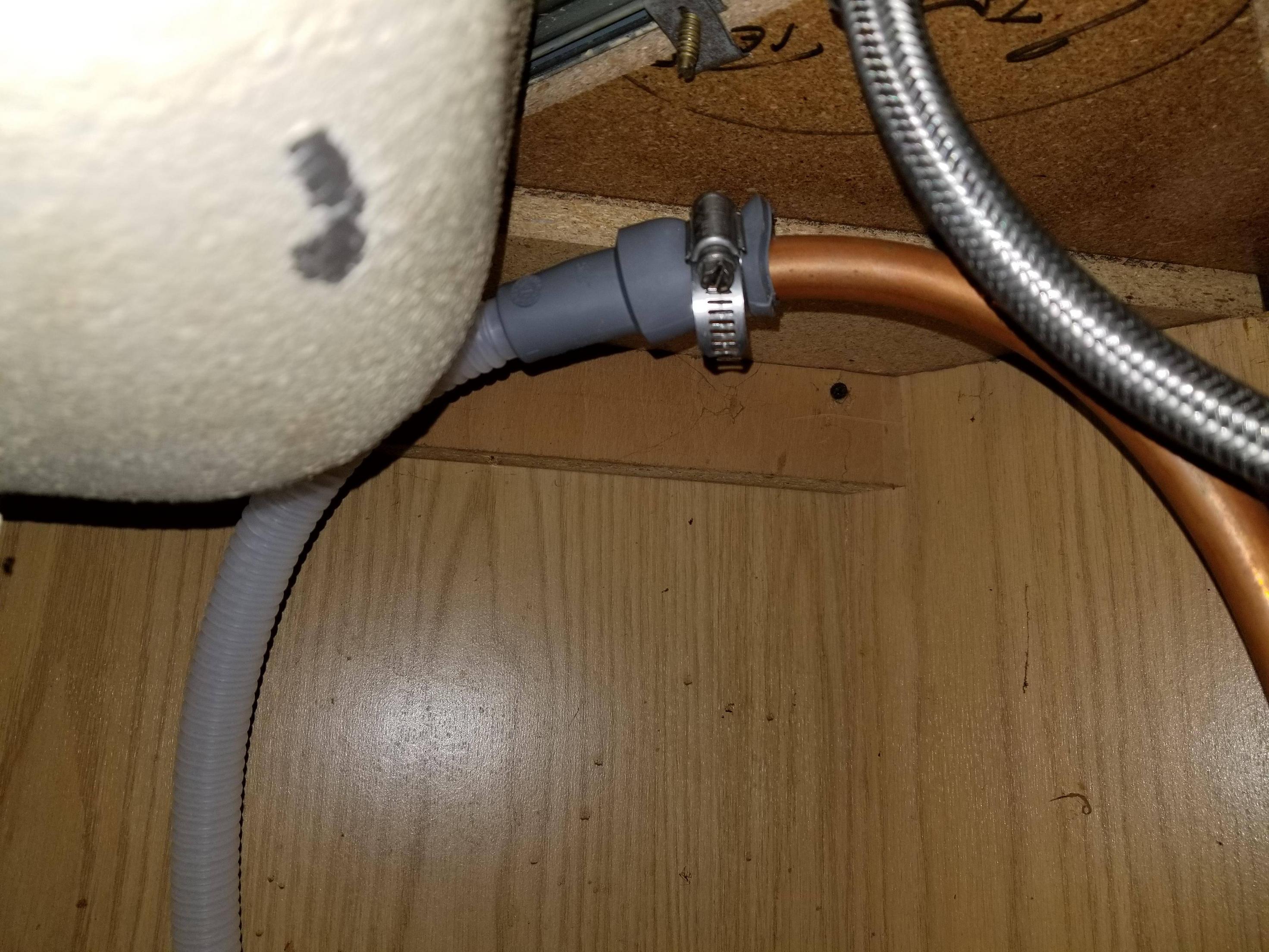 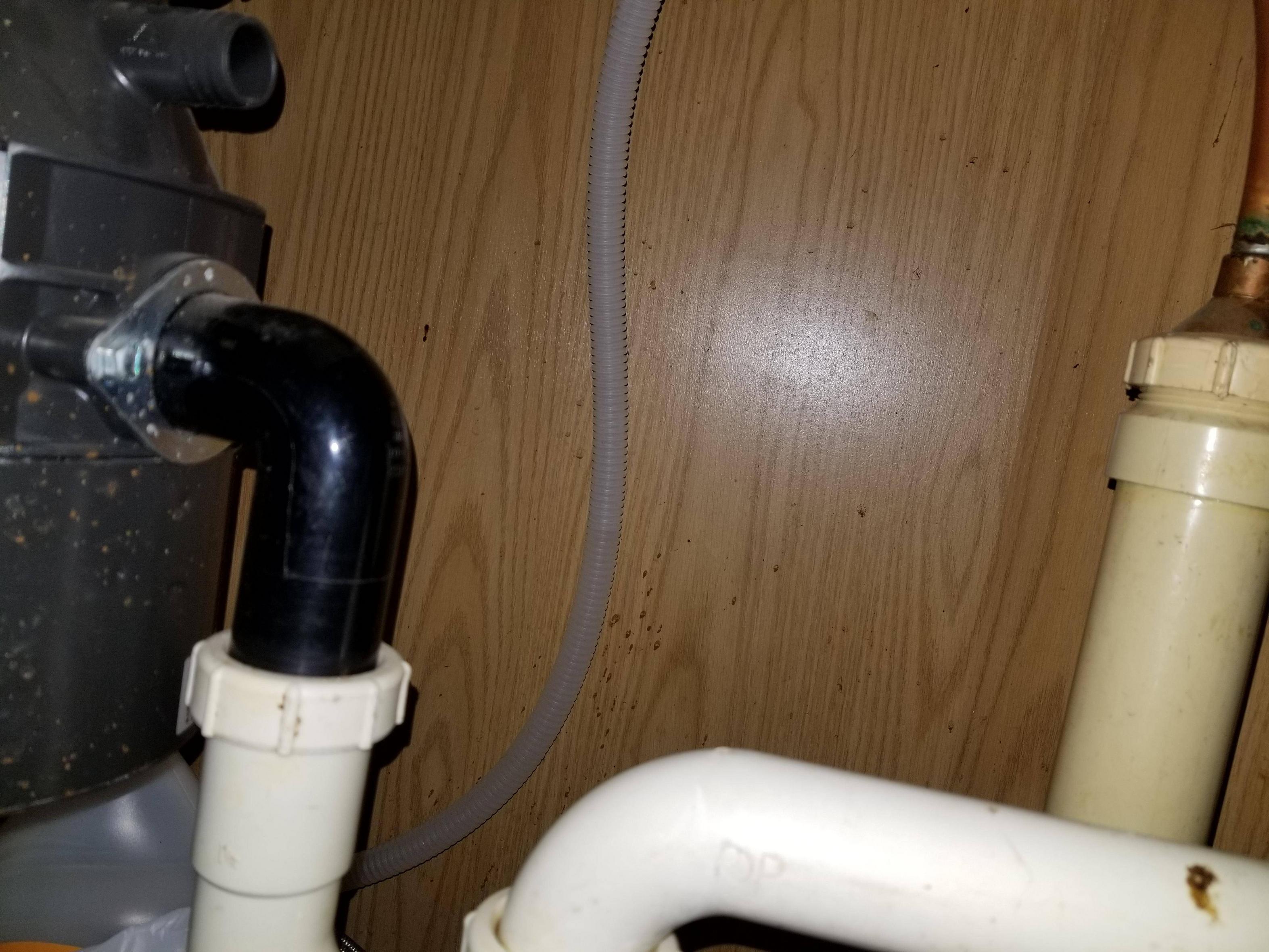 One of the answers below suggested that the action of the dishwasher draining would siphon the water from the other P-traps. After conducting a test, I concluded that this was not happening. After running the dishwasher, I double-checked the two other P-traps. They were full of water, so I accepted that even though the configuration is not standard, it still does work.

I found out that if I run the furnace fan, it triggers the odor, and there is a vent opening directly under the kitchen sink, which you cannot see in the pictures above because it under the cabinetry. It is a concrete slab foundation.

I contacted a plumber for assistance. He suspected a busted sewer line, so we contacted a sewage cleaning company. They came and discovered a lot of roots in the sewer drain, so they cleaned it out. There was immediate relief from the odor. The roots were causing a blockage, but nothing was actually coming out of the drains. You'll find out why in a minute. After a week, we could still trigger the odor, so we knew something else was going on. We contacted the sewer guys again to stick a camera in the duct work under the sink. They found sitting water. Egads! They ran the water on the kitchen sink and discovered flowing water (not even a drip, but a major flow) into the duct work sourced somewhere close to the kitchen sink. Conclusion: there is a leaky drain pipe in the concrete slab that is just above the duct work to cause it to fill with water.

Because it was drain pipe leak, I contacted my warranty company. We bought the house in October, and it came with a 1-yr warranty. They gave the name of their technician indicating there was a $75 deductible. Fine. He got there, and I explained the situation to him. Apparently, plumbers don't have cameras to use. We spent an hour just explaining and describing the situation. He told me to call back in a week if I hadn't heard from him. I called him today; he said he'd call me back after lunch; that he had just left a message to the warranty company. The warranty company called me back this morning: "We don't cover leaky pipes in the concrete slab." Boom!

Your undersink setup is quite unusual. Normally you wouldn't see three independent P-traps.

What's happening is that as your dishwasher drains its siphoning water out of the other traps. This allows sewer gasses to rise through the sink drains.

To correct this, have your undersink area replumbed to have only one P-trap with the other drain sources connecting before the single trap. For your dishwasher this is quite simple because your garbage disposal has a nipple where your can attach the dishwasher drain hose. This has two main benefits. The first is that it shares a P-trap as discussed. The second is that any solids end up first in the disposal, rather than directly down the drain. There is a plastic plug in the nipple that would have to be removed before using it.

It's likely that you code forbids you from connecting the dishwasher directly to the disposal without the use of an air gap. An air gap installs at the sink above the counter and, among other things, prevents backpressure on the waste line.

The house was built in 1950s on concrete slab with cast iron pipes built into it. Apparently, after a few decades, these pipes rust out from the bottom. Then the drainage water has to drain somewhere, which, in our case, was the duct work. Normally, you would have to basically bust up the floor to replace the pipes--all of them eventually--but it's messy, expensive, and extremely time-consuming. We hired someone that simply drilled a new hole in the concrete slab right next to the kitchen sink and installed a new drainage system to the sewer line on our property. Luckily, the sewage line was only about 10 to 15 feet away from the kitchen sink. The whole job cost us $3,000, and we got a clean-out as well. After that job was done, we got another company to clean out all the ducts for about $325.

We still have the old cast iron pipe drainage system for the bathrooms and laundry room, but the kitchen is on its own drainage system in the house. We haven't experience that sewage smell since the new system was put in place.

3
How can I locate an odor emanating from the kitchen/laundry area?
1
Water in kitchen sink smells
0
Foul smell in my bathroom when I run water anywhere in my house
5
Constant backed-up water from dishwasher drain
0
Bad smell from disherwasher - is this a bad setup?
1
Sewer gas smell in replumbed old house
1
Warm Weather Smell...Again
3
Smells in kitchen sink
2
Sewer smell in bathroom ONLY when central a/c is on and kitchen sink is running water