Which wire is line vs load wires

Which wire in this configuration is line and subsequently which ones are load? 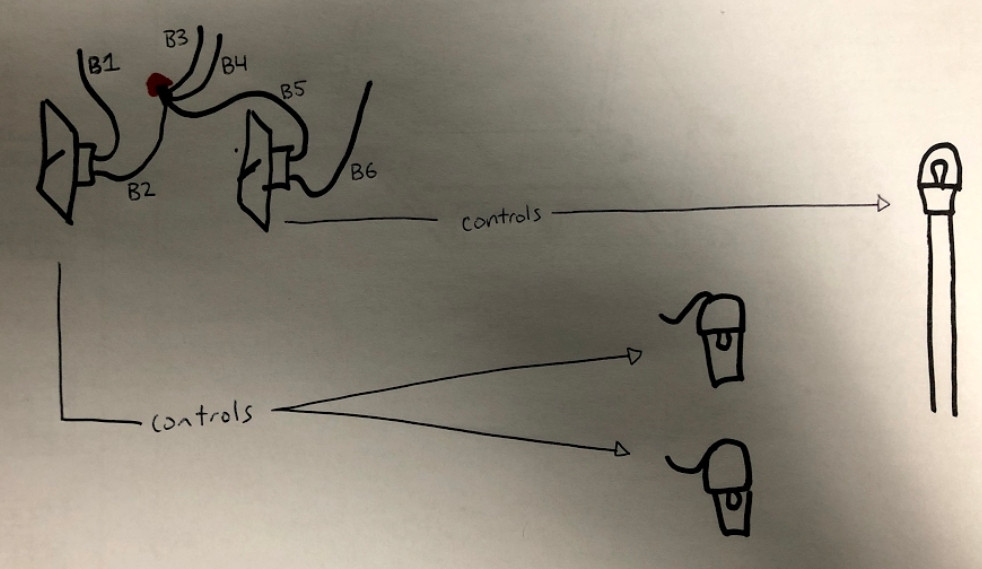 Not shown: each switch has ground wiring as well. Left them out for simplicity. There is also a clump or neutral white wires in the back of the box with a wire nut around them all.

Background: I’m wiring in a smart switch Caseta by Lutron and it has a black line in and red load out. I want to swap the right switch with this and need to know which of the existing two blacks is line in vs load out to the light.

The electrician used a red wire nut, not sure if that was intended to indicate something about all of those black wires.

I was a bit confused by this configuration because my assumption is that B1 is line, and through the left switch it caries power up to the red-capped pigtail and that feeds power to the right switch via B5. However when left switch is off, right switch still works.

My assumption is B1 is line, B3 and B4 go to each of the lanterns, and B6 goes to the pole. B2 and B5 join the switches.

OK, so B2-B5 (blacks I assume?) are hot all the time, and would be even if B1 and B6 were disconnected. Those four wires perform the following 4 jobs (and I really don't care which is which, as it's irrelevant):

Now, cables are made in particular colors, but that does not reflect what functions those wires actually do. I like to re-mark wires using colored tape, using the following color code: :

B2-B5 are always-hot and are already black. I would recolor B1 to red... and B6 to blue. And also recolor the wires that they splice to from the wall. So now that your wires are identified, they are same color to same color.

The colors of wire nuts

Colors of wire nuts are a different deal. They designate wire nut size. Red is "the biggest in ordinary use". Yellow is next down, fit for 2-3 and sometimes 4 #14 wires. Orange is good for 2 wires. They have a lot of overlap in their ranges, but for instance four wires would be too much for an orange.

Their ranges are published and it's best to stay near the middle of the nut's working range. You can stretch a yellow to work where a red is ideal, but better to just use a red.

OK, based on this highly technical drawing I'm going to say that B2, B3, B4 & B5 are all connected and hot. one of the B's is the feed and is connected to a feed out. B2 and B5 make both switches hot. B1 would then control the lanterns and B6 would control the post light.

Now you've stated that the grounds have not been shown. You also seem to be missing some neutral, white, wires that would be connected to all these lights, to the line feed in and the line feed out. How about that?

To answer your question further: B2 and B5 are considered "line" and B1 and B6 are considered "load'. Line supplies the power (hot side) to the switch and the load side of the switch (switched hot) is delivering the current to the device being energized. In this case - lights.
In your question you just had the flow going the opposite way.
Edit
Typo correction; B2 and B5 are "line" and B1 and B6 are load.