Can I substitute a 100 amp circuit breaker in a 90 amp spot?

Depends on the label on the Heat pump, the wire size and type, and the stab rating on the panel cover.

Breakers do wear out, it would still be a benefit to replace with the original size it if was the correct size to start with.

It is rare that anybody installs a smaller than maximum allowed breaker at the time of installation, but the information you need can be found on the nameplate of the Heat Pump, it should look something like this: 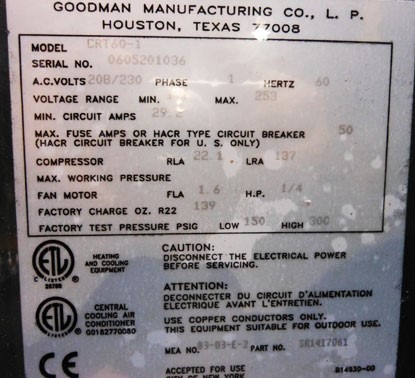 The line that says "max fuse amps or hacr type circuit breaker" is the line that tell you the maximum breaker allowed. This breaker can be at the electrical panel or at the disconnect at the unit. If the breaker at the panel is sized to the maximum listed then the wire only has to meet the rating of "minimum circuit ampacity". But if the over current protection at the unit provides the maximum allowed breaker or fuse, and the breaker in the panel is larger then the wire has to be treated as a "feeder" must be matched to the breaker in the panel.

You can see in the label shown that the breaker is allowed to be 50A, but the wire has to only be sized for 29A. But if you feed it from a 60A breaker in the panel and a 50A breaker or fuse at the unit then you would need to up the wire between the breakers to 60A wire. The amperage rating of the wire is based on insulation and conductor type from a chart in the NEC (with additional restrictions on wire #10 and smaller) and the temperature rating of the terminals where the wire is attached.

Then there can be an issue with the breaker in the electrical panel. Many panels have a restriction on the label that limit the total amperage of breakers installed head-to-head. If increasing the breaker size exceeds this number then you can't do it.

Have the connections at the breaker been checked for tightness? If AL wire, is there any sign of oxidation? Is there still enough noalox on there? My mom and dads house had an electric boiler for radient heat (yeah, I know, don't start! LOL) that required a 125 amp feed. The original installer used AL wire. There were 3 breakers for the heating elements in the boiler and one for the circulating pump. My dad couldn't turn on all the heating elements without the feed breaker in the main panel getting really hot and eventually trip (scary situation) . To fix it I ripped out the AL wire and installed the correct sized copper in flex conduit. Completely solved the problem. I know AL is a lot cheaper and when installed correctly can do the job, but in this case, with such a high current draw, I felt copper was best.

If the wire is not sized to carry 100A, then you cannot use a 100A circuit breaker.

Not the answer you're looking for? Browse other questions tagged circuit-breaker circuit or ask your own question.

4
Amp rating of ganged circuit-breakers
3
Why does the breaker keep tripping on a circuit with two rooms' lights and a sewer pump?
0
circuit breaker issue
2
Replacing 10 amp breaker for 20 amp
1
4A circuit breaker for a refrigerator?
2
Basic Circuit Breaker trips inconsistently, persistently
7
How to use a 100 amp sub panel for a 50 amp input
0
Single pole breaker in Transfer Switch trips on transfer to GEN position every time but only on Master Bedroom circuit, 5 others OK