Baseboard water heat not heating one room; Rest of zone/house is good

I have a baseboard water heating system set up in three zones. One zone consists of two bedrooms and a bathroom at one end of my house. The thermostat for that zone is in the hallway connecting the rooms.

Yesterday, one of the bedroom radiators stopped getting hot. I'm not sure when it failed, but we noticed it when we turned in for the night. It had been working well (sometimes too well) for years previously. The other two zones work as expected, and the other two rooms in the affected zone work very well too.

There were no changes made to the system at all and I don't find any evidence of leaks anywhere.

The city did shut off our water supply for 6-7 hours yesterday while doing some work in the street. I think that's just a coincidence, but I don't necessarily believe in coincidences.

Could the water being shut off all day somehow allowed air to be introduced into the lines that found it's way to the affected room and "air-locked" the radiator?

It seems to me that the circulation pump is louder today too. It seems to be making a noise like bubbling or flowing water. I don't recall ever really hearing the pump before (but I didn't really listen to it either) Is the "running water sound" normal for a circulation pump? Is it an indication of air in the lines?

I don't know how to bleed the lines of air. I understand the concept, but I don't know where the bleeder valve(s) is/are and, in general, don't quite understand how the system is plumbed. I have no real experience with hot water heating systems.

Does my assessment that there is air in the line going to the affected bedroom seem reasonable, and if so, how can I troubleshoot/fix this problem? What else would cause behavior like this?

First, if this is a forced hot-water system with baseboard heating, they're called convectors, not radiators.

Bleeding the system is fairly simple (though a bit messy and time-consuming), and, as you diagnosed, the most likely fix. There should be an air bleeder, or purging, valve at the end of each baseboard unit and one in the basement by the boiler, perhaps near or on an expansion tank. 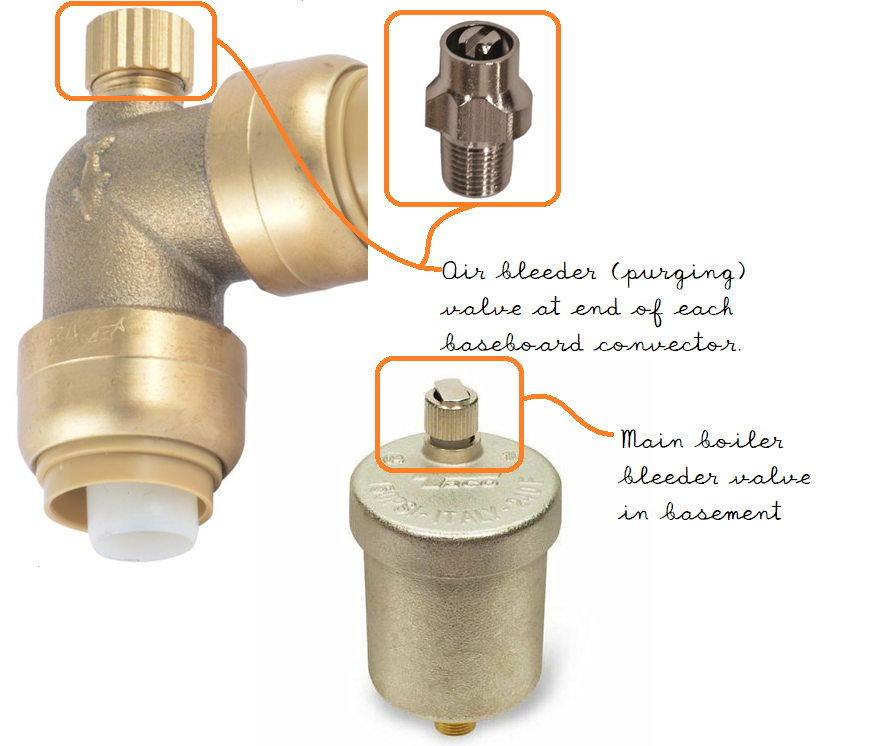 Some valves are automatic, having an insert that expands when wet, effectively sealing the valve, and contracting when dry so air escapes. If that is the case, you can wait, and eventually, most air would bleed out... but that would take quitre a while, if your system had lost most of its water.

Manual and automatic bleed valves can also be loosened by hand, with a screwdriver or coin, or with pliers. Use caution, because an old fitting could be brittle and break if forced. Lift up the baseboard cover from underneath and swing the bottom out to access the valve at the end of the pipe. Have some rags handy, as there is inevitable water leakage while bleeding. Also, mind the hot water.

Though it's usually easier to access the main bleeder, it's at a lower point in the system and will not get out the last bit of air blocking heat to that room. However, it may be useful to purge some air from that, too.

Not the answer you're looking for? Browse other questions tagged central-heating radiator water-circulating-heating or ask your own question.

2
How do I bleed baseboard radiators without a bleeder valve?
3
Banging behind wall when heat comes on
1
Second floor radiators only heat with all other radiators off
0
Need to purge air from every radiatior?
1
Is 68F too low for hot water heating thermostat? Final radiators not getting heat
0
In open-vented central heating system why does height of cistern matter when water gets pumped anyway
0
Bedroom Radiator not operating properly
1
Sizing a circulator pump in a closed loop heating system with multiple zones
0
If I only want to pressurise central heating not hot water should I get a regular boiler or system boiler