I have a UL-approved lamp that I've had on my desk since about 2004; it's the kind with two metal arms rising from a heavy base that connect to a halogen bulb fixture. The other day I was working at my desk with a piece of sheet metal (don't ask), and it slipped and briefly contacted both arms of the lamp. Sparks shot everywhere and the lights dimmed. I took the thing apart looking for the broken wire, and instead discovered to my surprise that there are no wires; instead the arms themselves function as the conductors. There's a transformer in the base, presumably so the current won't be enough to kill you, but that obviously isn't enough to prevent problems if there's metal nearby. Can this seriously be how the thing is meant to work? 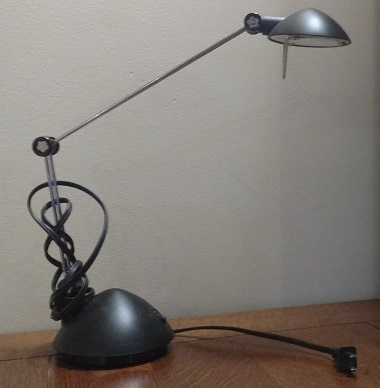 Lamps below the low contact voltage are not uncommon. I have installed many “fancy” systems that the conductors are not insulated and the lamp holders clip on to the wires . Some fixtures have fancy looking loops with the same exposed wiring. I am sure it scared the #%%^ out of you but it is not dangerous. I think it is 15vac and 30vdc

Most such lamps use 12 volts AC, which is considered safe in terms of electric shock.

The reason for this is that a minimum current is required before muscles contract, preventing one from letting go of the wires. For most people, 10 mA at 60 Hz is considered safe, other than if the current were to go directly through a vital organ (e.g. during open-heart surgery).

Human skin resistance, when damp, can be as low as 1,000 ohms for each contact, and the body resistance is about 300 ohms, so the maximum current that can flow at 12 V is about 5 mA. Therefore, it's unlikely you could get a dangerous electric shock from 12 VAC.

That said, as you found out, bare conductors can easily be bridged by metal, e.g., a dropped screwdriver or pen. There probably is a fuse by the transformer that would have blown had the sheet metal stayed in contact, but you removed the short circuit quickly enough to save the lamp. Underwriters Laboratories testing changes with time, and represents best safety practice at the time the approval is issued. Most likely, such lamps are no longer approved, though I wouldn't consider one dangerous, knowing its foibles.

Not the answer you're looking for? Browse other questions tagged electrical light-fixture lamp halogen or ask your own question.

3
What is the maximum voltage you can have on exposed rails?

5
How can I remove the wires from this lamp holder?
5
Molten wire nuts on recessed MR16 halogen lights
0
What's this type of lamp light bulb socket called?
2
How to remove this ceiling lamp cover
0
How can I safely get power strip to desk in center of room?
3
What does "class 2 input only" mean in my LED desk lamp?
2
What is this threaded lamp(?) piece called?
2
Repair broken desk lamp