How do you achieve this stairway 'chaser' effect with an LED light strip?

Here is a gif showing it in action, once the motion is detected, the strip slowly lights up directionally from bottom to top, how is this achieved? I can't seem to find how this is done: Looping GIF link

Here is the website that the video came from.

Note that this DIY project requires electronics and software knowledge. The website has fairly detailed hardware instructions. The designer has not posted the full software yet. Pieces of the software are available from various open sources. 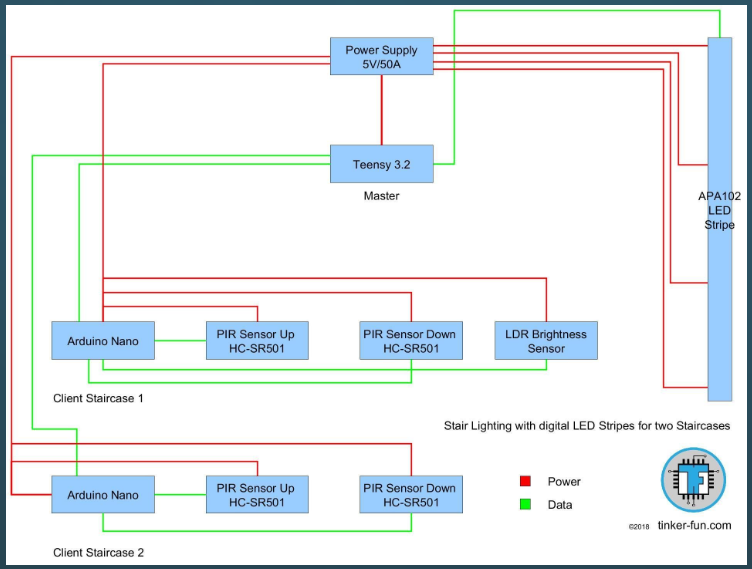 The important part is the sequencing

What makes the light "run up the stairs" is the use of individually addressable LEDS. That means each LED on the strip has a microprocessor that can be called up and say "hey, you, turn on at this RGB value: 0x999999". That adds a bunch of complexity. Not least, the microprocessors that monitor the PIRs and sequence the LEDs in the direction being traveled.

However, there's no end to the cool: the processor could roll pulsing light up or down the stairs... or it could even do rolling rainbows of color, like Boeing Dreamliner or something, because virtually all these "individually addressible LEDs" are RGB color type. It's there; the poster just hasn't unlocked it because the limiting factor is software (you have to write it).

It also forces the installation to use 5 volts DC instead of 12/24 volts DC. This means the power supply must be heavier, and the wires must be much heavier. Parts list is:

You can do the kaboodle on 12V or 24V, and so the wires get a lot smaller. You can drop the microprocessor altogether, and simply use 12/24 volt PIRs wired in parallel. (i.e. whichever PIR sees a customer turns the lights on, and the lights come on when either PIR asks for it, and the PIR auto-times out after a time.)

You can also use simple, cheap 3528 monochrome LEDs in your choice of color temperature.

Not the answer you're looking for? Browse other questions tagged electrical lighting led stairs design or ask your own question.

0
Powering 5 foot section of LED flexible light strip with AA batteries
1
How can I dim landscape lights permanently?
1
How to find a motion sensing light switch that turns lights on AND off when motion is detected?
2
How do I install this motion-sensing light switch?
1
How directional is LED strip lighting (with a diffuser)?
2
Retrofit LED can light