So I bought a house built in 1957. And all of a sudden after plugging a laptop into a bedroom on the other side of the house, all the overhead fixtures on the opposite side of the house stopped working.

So I went out and bought a new overhead took the old one down and was left with a mount which had a black wire and a white wire. 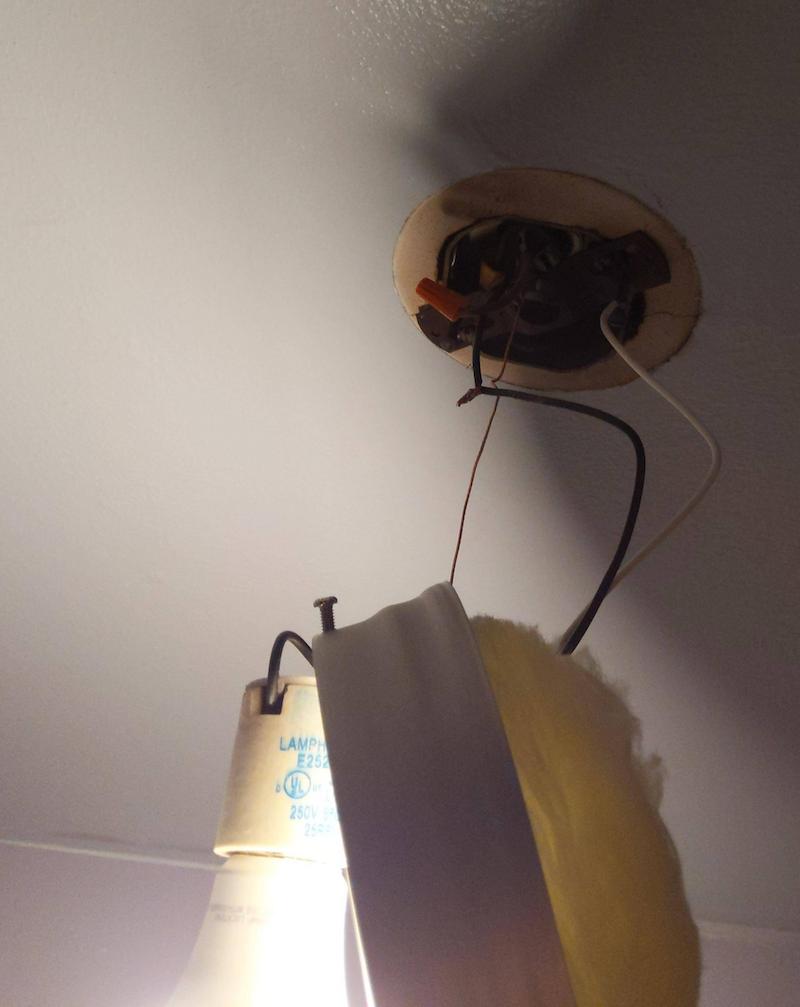 I figured it would be easy, I went out and bought a new fixture and hey! All I had was a black wire and a white wire. So I put them together and nothing happened.

So I thought perhaps there was a ground wire I had missed or maybe the connections weren't tight or what have you and would I still couldn't get it to work.

But then accidentally I touched the white wire to the metal of the mount, one of the screws as a matter of fact and now it works perfectly.

This can't possibly be safe can it? The new fixture had a skinny copper ground while the old fixture had no ground wire coming from the ceiling nevertheless I hooked up the ground but with that hooked up it still didn't work.

So for my lite fixture to work I need to have black to black, white to metal mounting bracket and copper ground to wherever. Why is this happening? Is it going to burn my house down? What's the deal? Please and thank you

The fixture needs black to black, white to white and ground to the mount or electrical box. If this doesn't work, then you have an open neutral somewhere in the line and you need to find out where it is. You'll have to check everything on the circuit to determine where the open neutral is. Do not keep the white wire connected to the mounting bracket (which is probably grounded),because you're completing the circuit through the ground path, This is dangerous, it could kill you.

This is a very common blunder...

and I'm glad you caught yourself. The blunder is trying random things until something works, then declare

... many of those combinations will work and then kill you.

This is certainly one of them.

Mains electrical has an "Equipment Safety Ground". The wires are always green, yellow-green, or bare. They should all be connected to each other and to nothing else. Their One Job is carrying fault current back to the panel so the breaker can trip. Back in the panel, the neutral wire has an equipotential bond to the ground rods, for the purpose of assuring the hot wires can't float thousands of volts above ground voltage, and for providing a fault current path.

Because of this, there is fairly good continuity between neutral and ground, which leads some to believe ground is a substitute for neutral. Not so at all. In fact, if you do that and your ground wire breaks or your ground rods have a problem, it can electrify every ground on the circuit or in the house. Suddenly what is supposed to be safe is dangerous.

Electricity is not supposed to be dangerous like that, and it won't be if you follow the electrical codes, which are law.

Don't fix 2 things at once

Your original problem is that several light fixtures went out. I imagine you do not know how to troubleshoot that. So you decided to "throw parts at it and hope for the best", so you created a project to replace one fixture. That had zero chance of fixing the problem, which, obviously, included four fixtures.

It's vanishingly unlikely that you would have 4 light fixtures fail at once. So there is clearly one single failure point that failed all of them, and possibly other stuff as well.

This is confirmed by the fact that you changed the fixture, and ... nothing changed.

The root problem is loss of neutral upline

Somewhere at one of the receptacles or switches, the neutral wire has developed a loose connection.

It's not too hard to find it if you know which circuit it is on. (since you can detect hot, you can turn off breakers until the hot goes away).

The loss of neutral connection is either at the first dead outlet, or the last good one. It is probably a "backstab" connection that has gotten loose. If the screw terminal is cold but the backstab wire is hot, you found it!

1
New Light Fixture with Old Wiring
0
What if I can not connect the ground wire of my new light fixture to an old electrical connection?
0
12V AC wire run to light fixture?
1
Wiring new lights with 2 sets of wires
0
very confused on the wiring for recessed lighting