Re-do paint over plaster in bathroom: How to feather/match?

I want to understand what went wrong, and how to repair it: 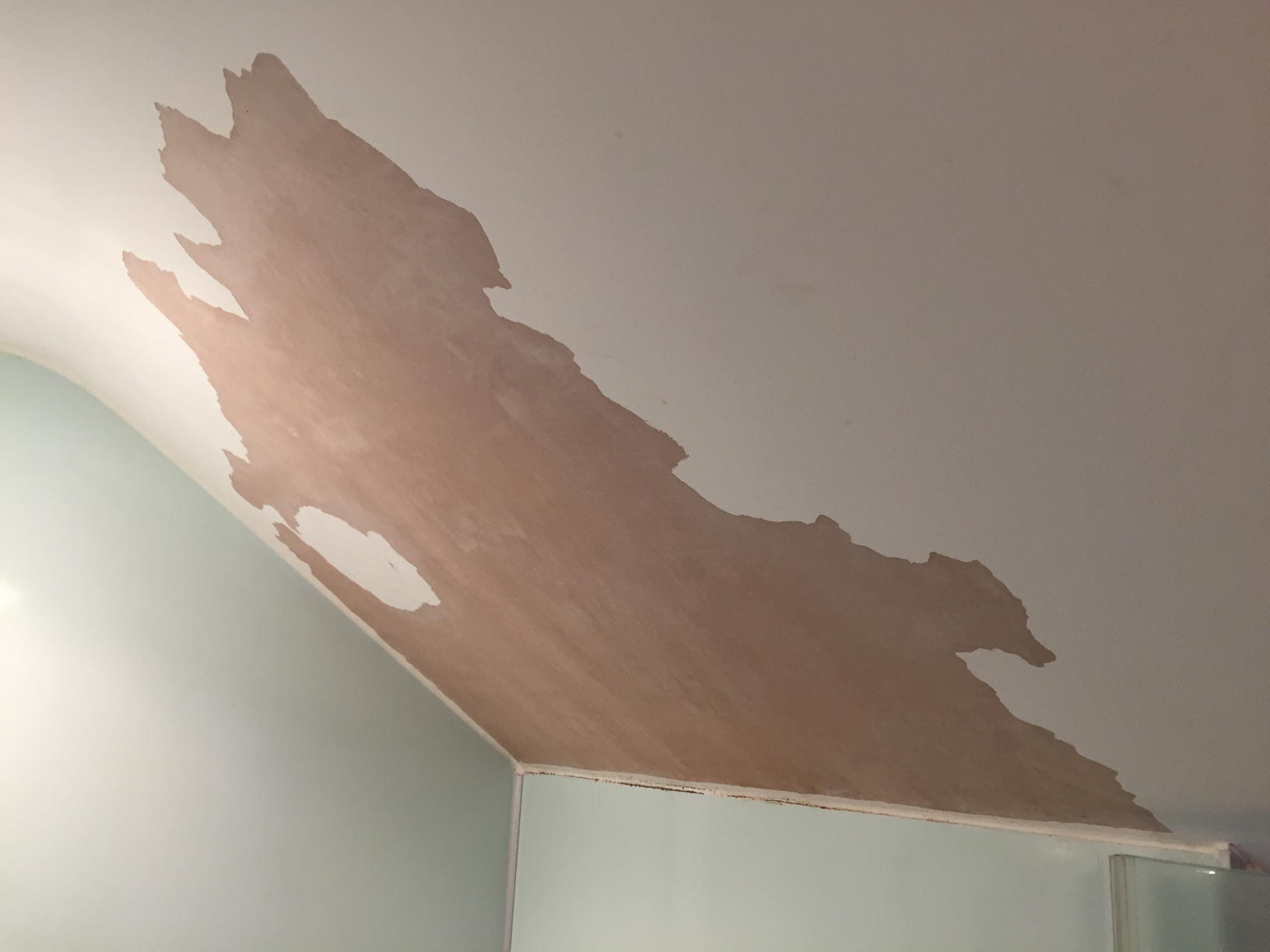 This bathroom in a loft was done in 2012. The plasterwork is really good --- smooth and shiny; but the last year or so the paint (Dulux Trade, 2-3coats) has been peeling off. It has all been done by builders that have wrecked a series of things, so it hardly surprises me [their plastering subcontractor was great].

This is how much I can easily remove with a flat 4inch scraping blade, it peeled in large smooth flaps getting smaller and more brittle towards the edge.

I guess it should have been Bathroom paint, but I know they first did a 'mist coat'. So how do I match the white & chocolate areas? Should I scrape a straight edge with a knife or so all around the peeling area and then scrape all paint off up to that line (so the patch is a rectangle or near enough)? Or just remove the 'island' (caused by a repair, as they put the ventilator there originally).

Should I sand down the sharp edges now, then re-paint 2-3layers, then sand down the transition again, and then give the whole room a layer?

I suspect the paint higher up where the ceiling flattens off is also loose (because the same surfaces and products, and the hot moist air pools up there around ineffective ventilator).

Looking at the other 'peeling paint' questions, this is a much higher-moisture situation. And I'm guessing PVA-sealing doesn't do anything, because of the high PVA content of the plaster (UK standard practice) or does it still?

Here's how you get paint to stick to things.

Paint cannot bond to a shiny surface; don't take my word on it, try to paint a mirror and see what happens.

Paint wants to see a surface that looks like Swiss Alps on a microscopic level - lots of jaggies and crevasses for paint to flow into and bond in shear. To human eyes, that doesn't look like anything more than a loss of gloss.

But this requires a "scuff-sand"; my favorite tool for that is a green Scotch-Brite pad. If you've ever gone to town with that on pots and pans, you know you can easily lift the shine off the pot.

So we're not trying to sand to level a surface; just to give it a microscopic roughness. Try around edges not to "blow through" an existing coating layer; that's not the goal.

Without the scuff-sand, you are painting a mirror, and the new coat will bond poorly. *This is particularly a problem where gloss paint is used, e.g. bathrooms. Satin/flat paint typically forms a roughened surface (to achieve the satin look) and that it easier to bond to (but I'd still scuff-sand it).

Everyone is looking for "scuff sand in a can". I am aware of many products which make that claim, but none I believe. We certainly don't want any residue that could become the second threat:

That requires a washdown; typically with whatever removes contaminants, e.g. soap and water. I also like to do one last 2-cloth wipedown with the actual solvent of the paint (e.g. water for latex), the 2-cloth makes sure you are lifting the contaminants away, not just smearing it around.

Contaminants prevent the paint from bonding by sitting as a film between old and new paint. Adding a layer that has no bonding strength to either the old substrate or the new paint. So it's gotta be gone.

Sometimes the substrate is a contaminant, like trying to paint a 2-part LPU over, well, almost anything :) In that case you need to use an appropriate primer as a barrier coat; the primer has different chemistry and is able to bond to both the substrate and the topcoat. There are many other reasons to use primer, but that is one of them.

Anyway, your predecessor did none of the above. Typical.

Any 2 layers that aren't bonding well will fail your entire paint job.

I have a machine where the original primer is separating from the substrate (because it was primed over mill scale). Separately, the original topcoat is separating from the second painting's primer (poor prep in an oily shop). Of course, it's not failing all at the same time, but in blotches. There is simply no saving this. No paint job can expect to perform well on top of a substrate that is failing.

Again, everyone is looking for a product in a can that will magically fix this, and they're not looking for paint stripper :) Unfortunately that's the only one.

The answer for good long-term performance is "it's all gotta go". This is the problem with letting monkeys paint your house, or applying products of poor provenance. You pay dearly for the mistake.

Fortunately, latex paints are easily removed with comparatively mild paint strippers, so you're not having to go crazy with Aircraft Remover as you must with alkyds or LPUs.

I have fixed paint similar to this in my current house. There were large areas where I could peel it off back to the plaster by hand or with a scraper.

Your builder's first coat has failed to adhere to the plaster and now it's peeling off. This could have been caused by:

You need to get as much of that paint off as possible, otherwise you will be putting new paint onto a surface that is likely to peel in the future.

I would use a filling knife or a Stanley scraper with fresh blades used at a shallow angle to get as much loose paint off as possible. If you get all the paint off up to the walls then great. Areas that are firmly stuck down you can leave or maybe sand or strip small islands. Remaining paint doesn't have to be straight lines, just as long as it's firmly bonded on.

Try not to gouge grooves into the plaster otherwise you're making more work for yourself by having to fill them back in.

I would then lightly sand the plaster and remaining paint all over with P120 sandpaper or sanding mesh. Be very light on the plaster because it will be much softer than the paint. This is why I would avoid sanding the transition lines at this point.

Then, as Harper suggests, thoroughly clean off the surface and remove any dust. Paint on a mist coat, over the entire ceiling. Use diluted Dulux supermatt or something similar.

Any remaining gouges or paint/plaster transition ridges can now be filled and smoothed. Use fine surface filler and a wide knife for anything shallower than 2 mm. Smooth it in firmly along the length of the defect, but don't overwork it. Wipe off with a damp sponge and try again if you need to. Use all purpose powder filler for deeper holes. When dry lightly sand any uneven filler and remove the dust. Remember it doesn't have to be perfect, just good enough to paint.

Paint on a couple of topcoats. Use a good quality paint suitable for bathrooms, such as Johnstone's acrylic durable matt. Follow the instructions and paint the entire ceiling.

Don't be tempted to use PVA as a sealer underneath paint. If you have problem surfaces then use a problem solving primer such a Zinsser product.

Not the answer you're looking for? Browse other questions tagged bathroom shower paint plaster preparation or ask your own question.

5
How can I finish this "peeled" drywall?
2
Paint peeling off layer of joint compound over plaster, am I in over my head?
1
Is sanding the best option to remove peeling wall paint?
0
Paint peeling in bathroom
1
How can I repair damaged plaster when I come to repaint?
0
Can i paint over this semi sanded gloss door?
1
What kind of exterior paint has a fine sand paper-like backing, is it a primer?
1
Skim coating over plaster walls with semi-gloss paint on them?