I'm hoping the friendly people here could help me. I'm looking to purchase a Nest Thermostat-E but my current thermostat (Vulcan/Bonaire Summer Breeze) only has 2 black wires connected.

I've searched around and asked for advice and I've heard some people say it will work with just 2, and some say I need a C-Wire.

Given the opportunity, I think it best to run a C-wire if possible, I have uploaded images of the Heater unit and it seems as though the 2 wires from the thermostat connect to the (green) 2 x "Heat" terminals and I assume the 2 x "Cool" terminals are for Air con if I had it.

Now my question is, is the single 24v terminal used for the C wire? And if so, what would the 2x black wires be named when connecting to the Nest Thermostat?

It also looks like there is a piece of wire connecting the 24v connector to the 2nd heat port, what is this for and do I need to keep it there?

If this is not possible, can I/ do I need to connect directly to the board?

If it makes a difference, this is in Australia. 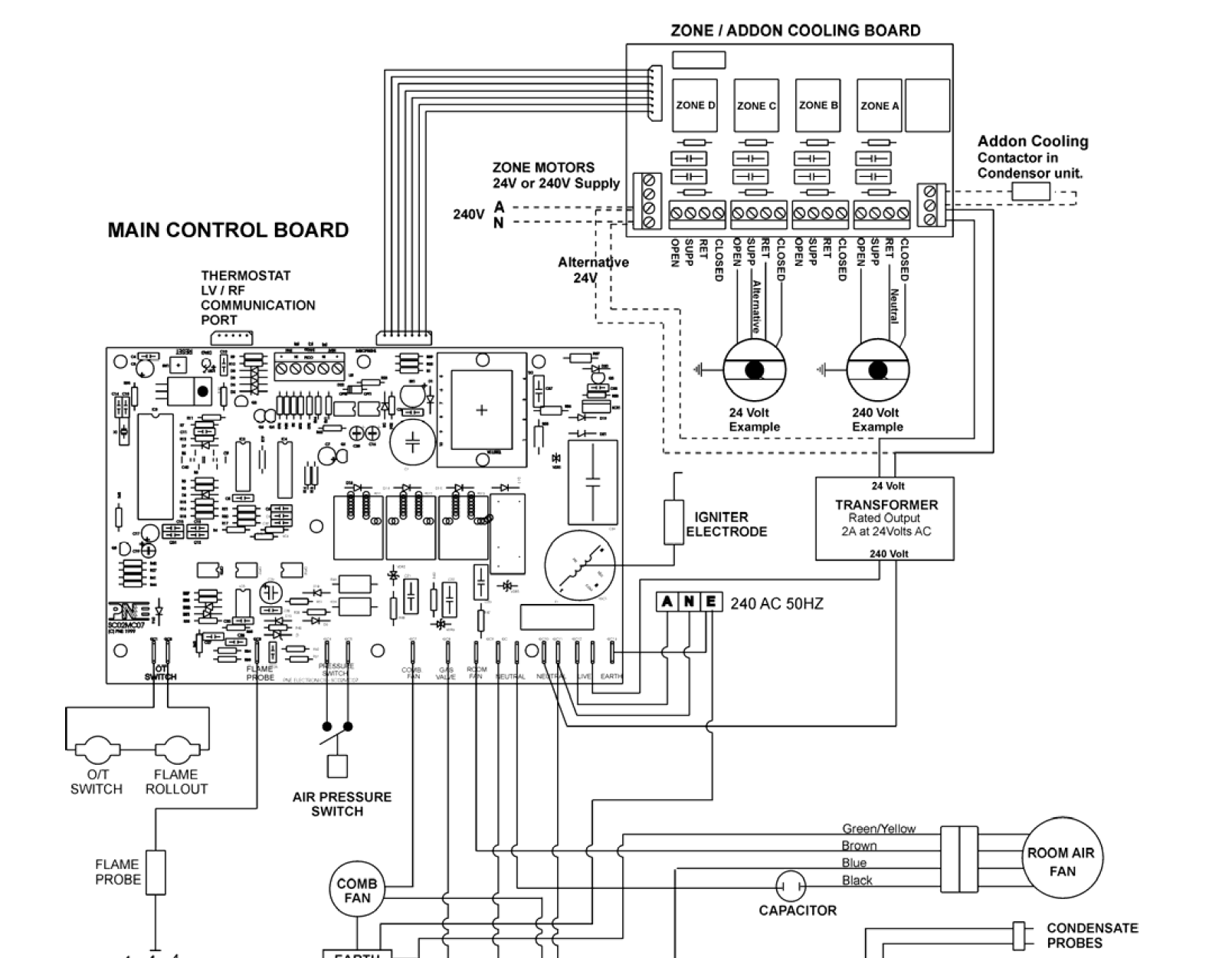 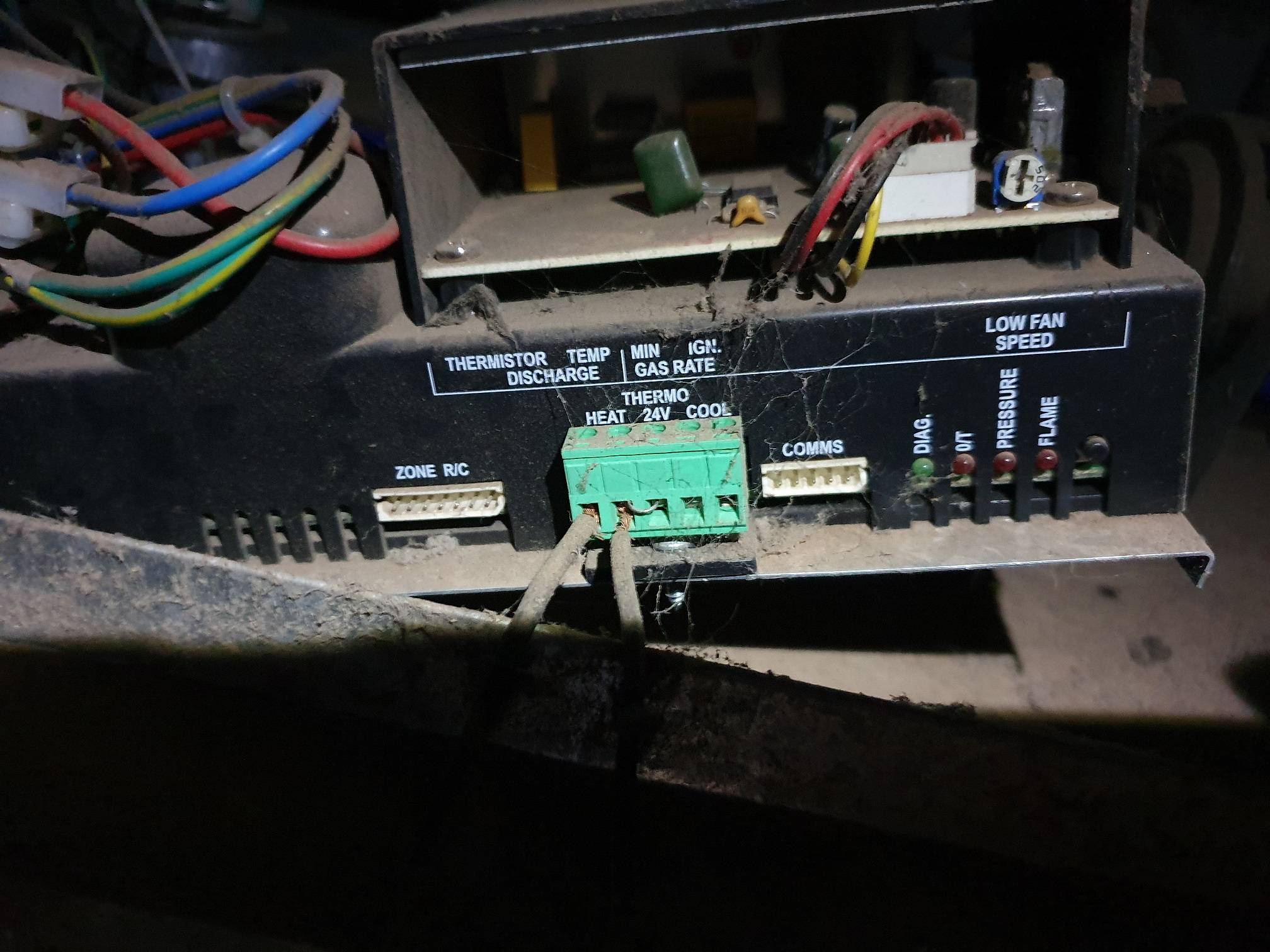 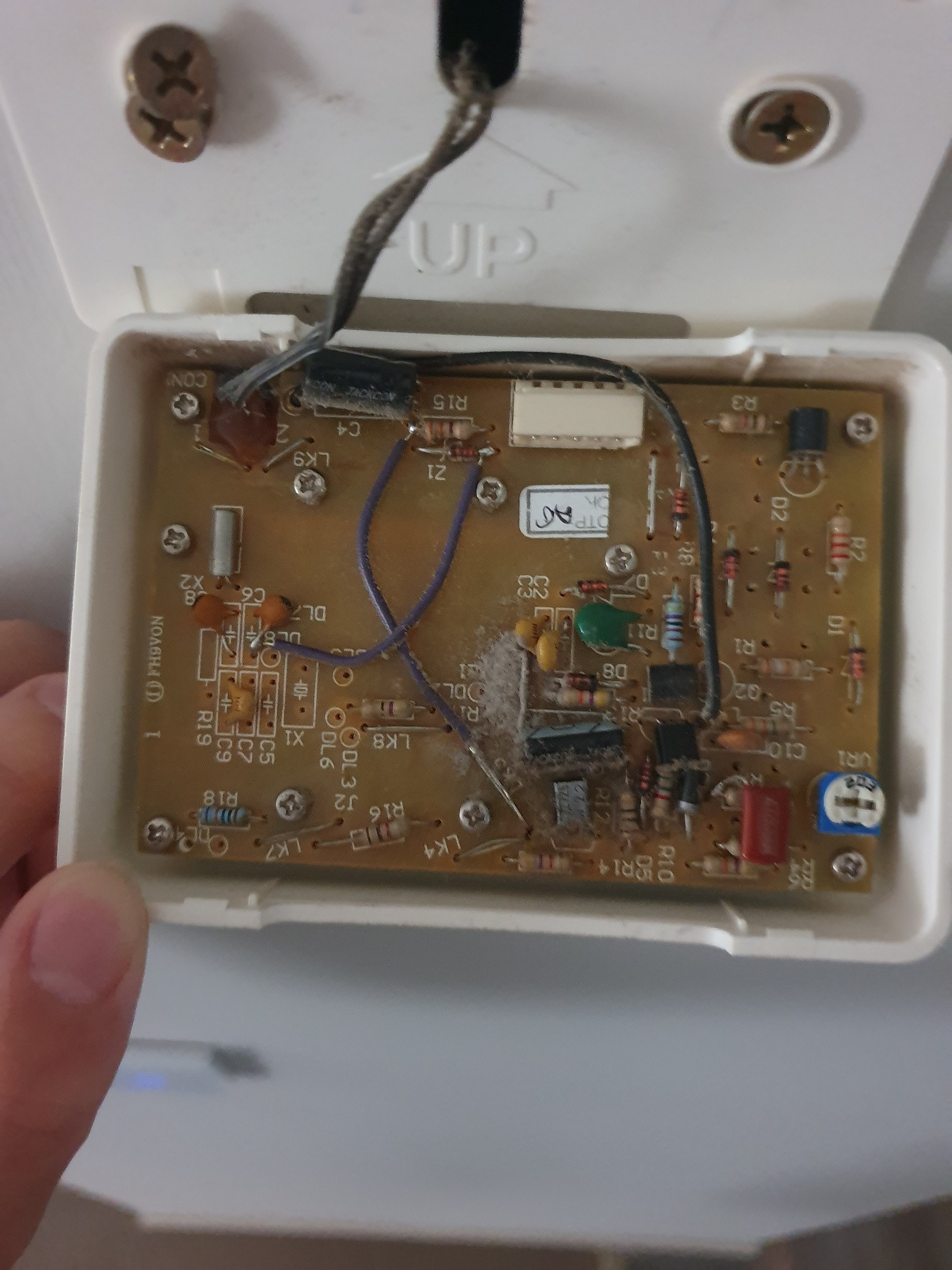 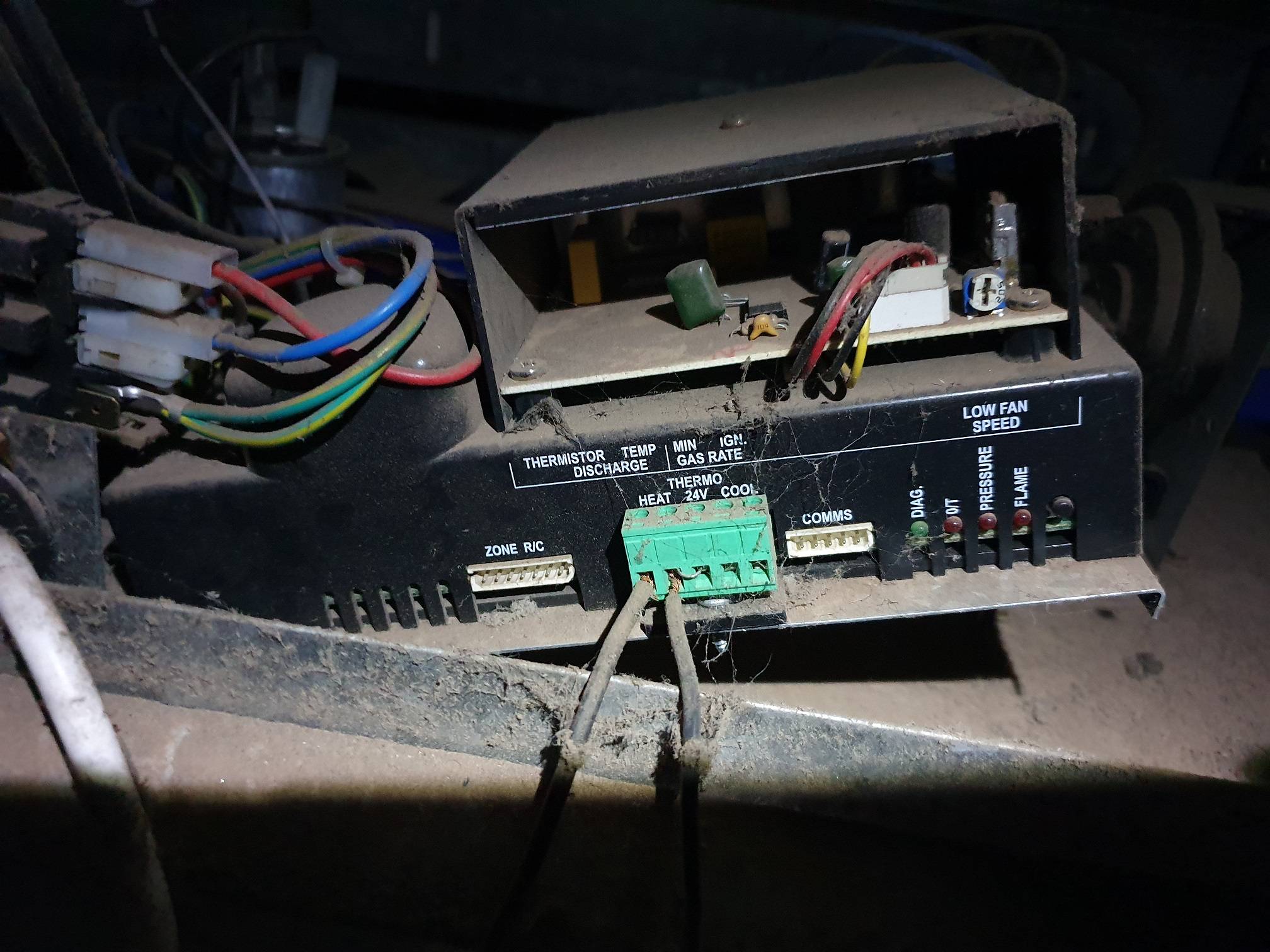 I too own a similar VULCAN ducted heater, and was thinking about fitting a nest (or ecobee) thermostat, here in Australia. I realize this is an old thread but I'll share my insight.

"I've searched around and asked for advice and I've heard some people say it will work with just 2, and some say I need a C-Wire." Simple Answer: They're both right! Google: "The Nest Thermostat receives power from your HVAC system. It also uses 2 AAA alkaline batteries as a backup, or to supplement if your system can't deliver enough power." Meaning you could use your two wires across R(RH) & W(W1), pop in a battery, and have a beer. OR, you could run a C-wire.

Secondly, let me address the comments section. I'm new here, so I'll just "@" credit everyone at the bottom. I also have some pictures to add Henry's collection.

Henry, the cables in the upper left "the blue, red and earth" don't touch them! These are LIVE wires, electricity can kill. Although interestingly, this brings us onto our next topic.

"There should be a 24vac transformer somewhere..." It's that big bulge in the plastic right under those wires "the blue, red and earth" @JPhi1618 it appears the 24VAC transformer is integrated into the control board on his system? Yes, it is.

It should.. It doesn't. But yes, the other transformer wire.. I whipped out my multimeter and probed away. I NEVER saw 24V ac (or dc) across any of the pins. My connector also had that weird wire link between heat and the one labeled 24V. The most voltage I ever read was just shy of 12V ac, which would make sense, as we're measuring mid circuit or "in series". Don't worry about the nitty gritty, just know, there's no usable electricity here for our nest (at least not on my unit). I wondered about that link.. I removed mine, and it seems to have made no difference to operation. However my unit has had a few bodges on the fan and capacitor wiring, a bit like the back of your thermostat Henry. That brings us to our next comment.

I understand the confusion behind the "manual" (analogue) thermostat. I think Jasen was imagining a tradition thermo-mechanical switch, whether mercury or bimetal. Like mine. Your thermostat Henry, has (digital) electronics. Which makes me think Vulcan are doing some trickery to charge the little capacitors up while the heater is "off" and while the thermostat is "open-circuit" this would explain why they used a pissy little LCD, like you'd find on a calculator. For us, it makes no difference.

Yes the "NEST" will want 24V ac connected to its R and C terminals for power. However that's not a good way to explain it. Imagine it like a DC circuit, there's a Positive (+) and a Negative (-). We have Three wires to connect to our nest R, C, W (we could also connect G if we really wanted). So how do we connect three wires to only a Positive (+) or a Negative (-)? Well if this wasn't hypothetical and we were actually using DC, we would connect our power IN (POS+) to R, (NEG-) to C, to our nest. Then we would get a signal (POS+) from W OUT telling the heater to turn ON. This is what happens when Henry's (or my own) existing thermostat "clicks" or is SET ON, it takes power from one of the black wires and connects it to the other, sending the signal back to the heater, telling it to switch ON. So of our existing two wires it DOES matter which gets connected to R and W, it won't hurt it if they're backwards but it won't function. Then we need a wire of opposite polarity to R from the other side of the transformer to act as our C-wire, which obviously connects to C. What is polarity? That's the positive negative thing, AC actually is DC just constantly switching its positives and negatives around. A power supply or a battery has (+) and (-). A transformer on the other hand, usually has two identically colored wires but polar opposites.

I would also like to know where you got the schematics from, but I've only just started this project (thought process) tonight. I might have to do some digging around.

With the comments out of the way, I'll share my thoughts thus far.

Some Rambles and Rants

I'm probably going to go ahead and do this. My house already has this Vulcan heater, but my house isn't very well insulated. So I'll jump in bed having forgot to turn it off and then need to get up.. or I'll be at work wondering and worrying if I left it on. Sure, I know I could think up alternative remote control solutions but then there would need to be max on-time timers or interlocks, and so on. it gets messy and complicated quickly. Plus it's not very good if it's only on and off. Obviously you could do more with an Arduino or Pi but still. With a nest or ecobee I can set up geofencing, turn it on or off and best of all, control the dial.

So when I've saved up a few bucks, I'll buy one. I've looked at them before, I suppose back then I was a little confronted by the wiring myself. Also the fact Nest doesn't officially sell or support them here in Australia. And it's a lot of functionality for just my heater, when my A/C will mostly be mini-splits. Overall, I put it in the "that's for later basket" but here we are again, it's winter next week. On the bright side i'm working and slowly saving money.

It does annoy me the features some have over others, the nest-e looks a bit ugly and basic, I'd much prefer the ecobee lite for the price but then I read it has a built in proximity sensor only for lighting up the display and not for occupancy detection.. So then I'm thinking stuff it, just go with the Nest 3rd Gen, it looks nice but this is getting pricey. I could probably use my home security PIR sensors for occupancy through IFTTT, I know you're screaming you can buy motion/temp/humidity sensors for them but much like the OP I don't like batteries.

The wiring for the nest is actually very straightforward, it only took a quick Google about HVAC wiring. One side of the connection backplate is for heating and the other hemisphere is for cooling. If the manufacturers had put another C connection on the cooling side, we could've powered it from either side in a "two transformer configuration" saving us some work.

One easy solution would be to install an additional transformer (preferably inside the heater unit because no electrician likes seeing one device with two electrical plugs connected to it). We would have to run an additional to the thermostat, like OP said. We would wire the additional transformers primary side to mains, wire the secondary side 24Vac down two of the wires to the thermostat R and C, then bring the signal from the thermostat W back up the third wire connecting it to a relay (coil) also connected to one side of the transformers 24Vac secondary side. We would then just connect our two heater wires across the contact of the relay. 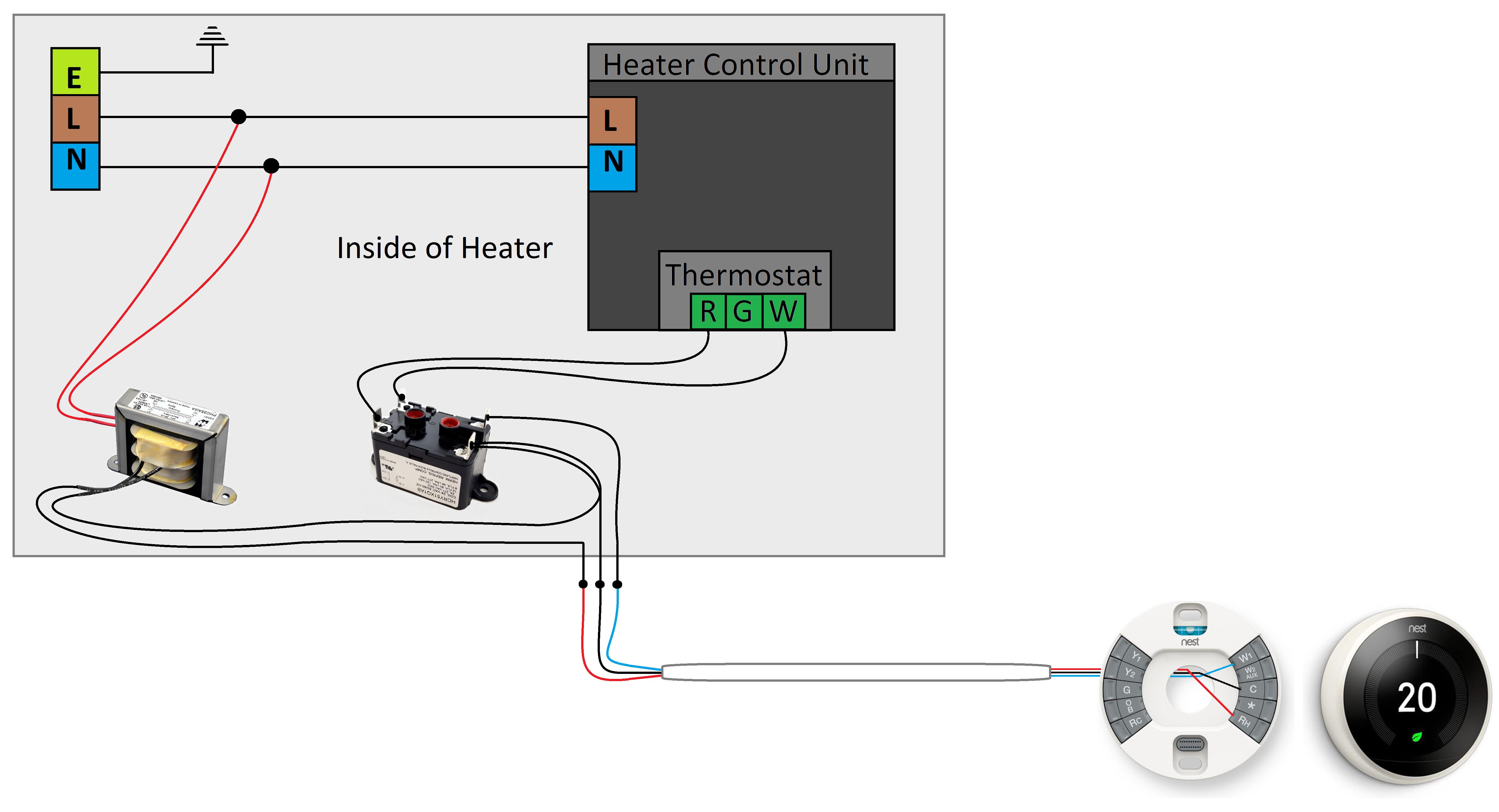 I'm going to take my entire control box out of my heater and clean up some of the last persons messy wiring while I'm there. I'll pull it apart and see where that "other transformer wire" is.. I'll follow the traces and get a better understanding because I would like it fully incorporated. I'm sure the VA rating of the transformer can handle a nest. I guess I'll wait and see.

I'll try and keep you updated on my progress

My original plan - adding the yellow pictured yellow wire as my C-wire: 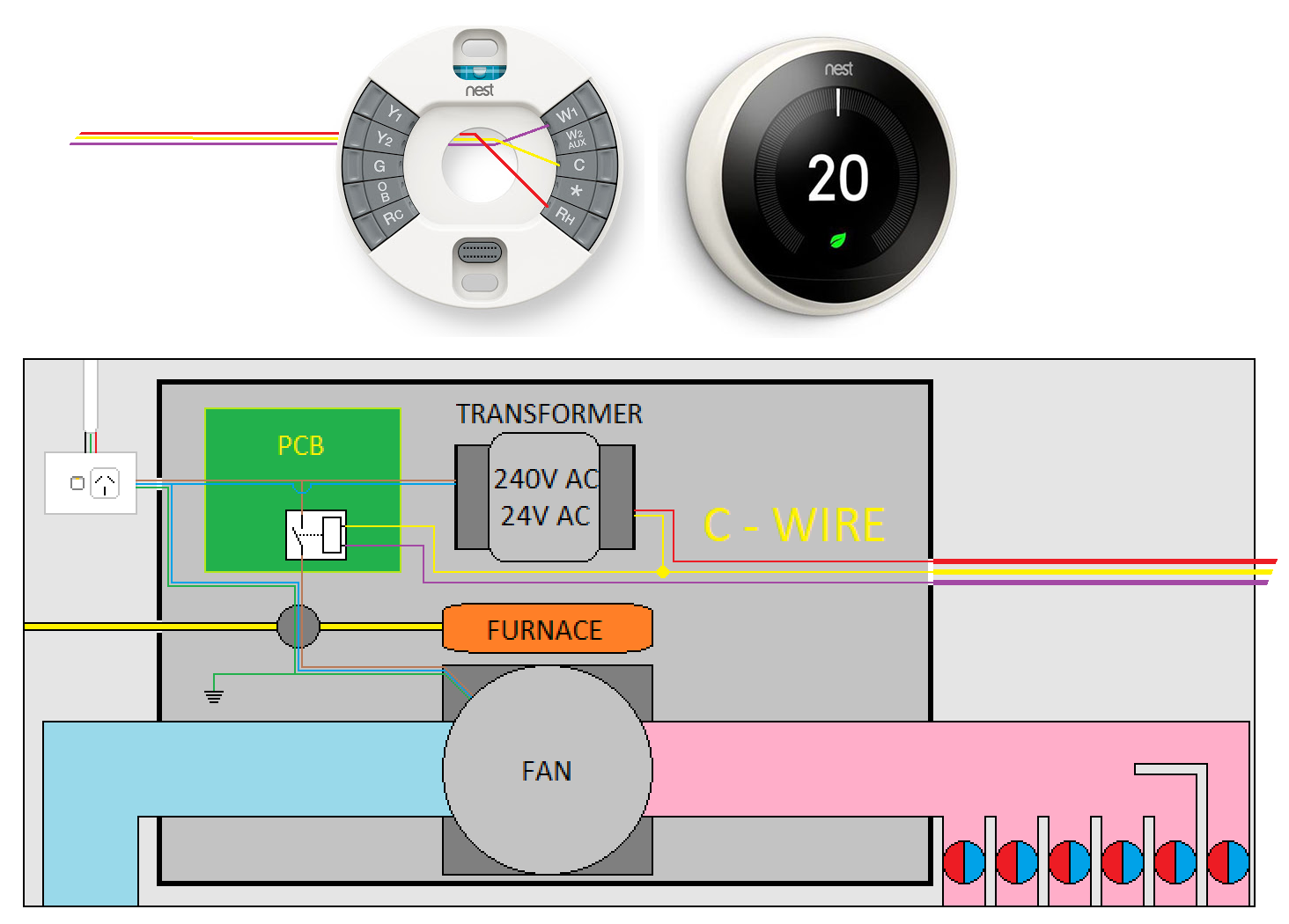 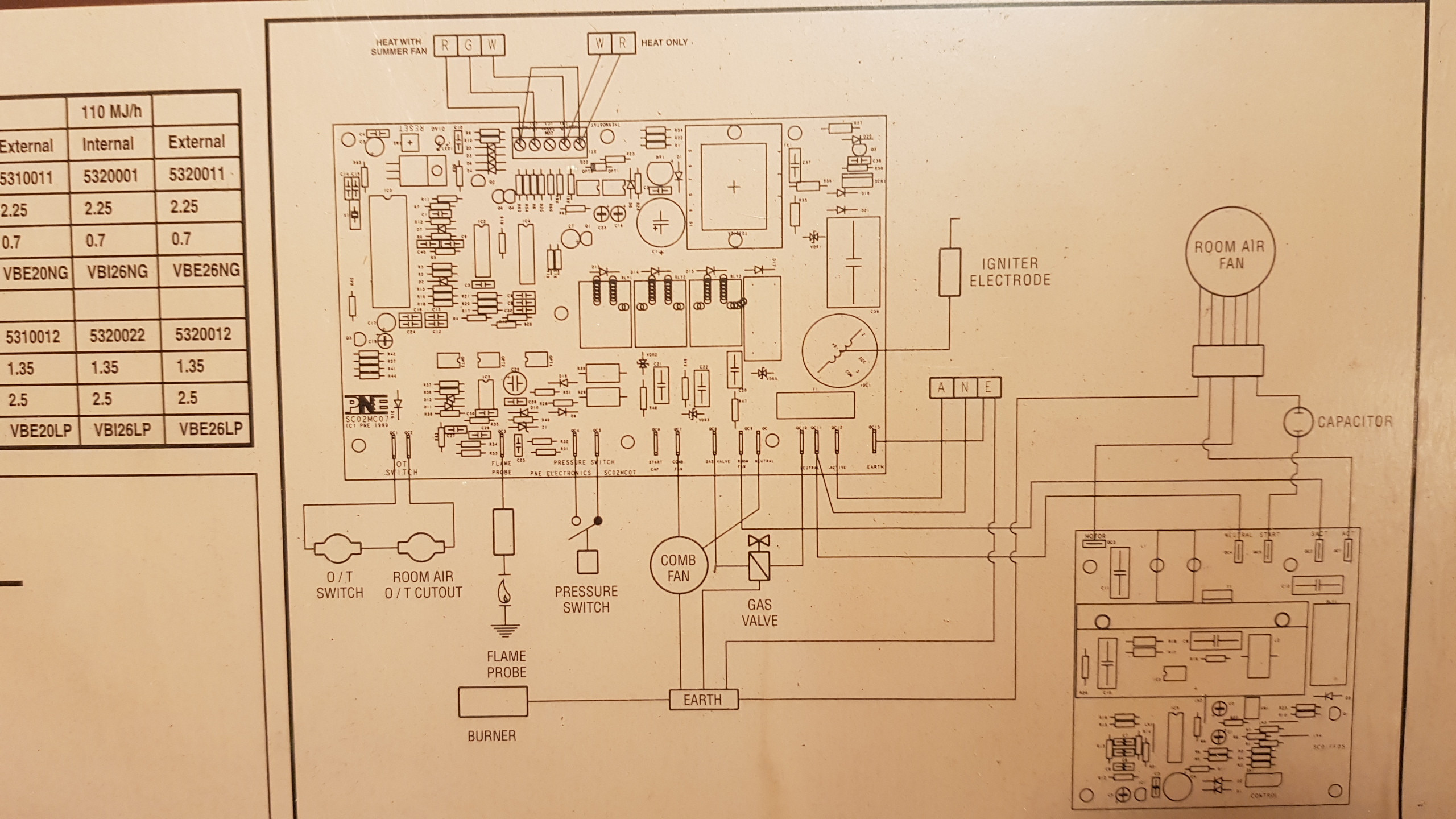 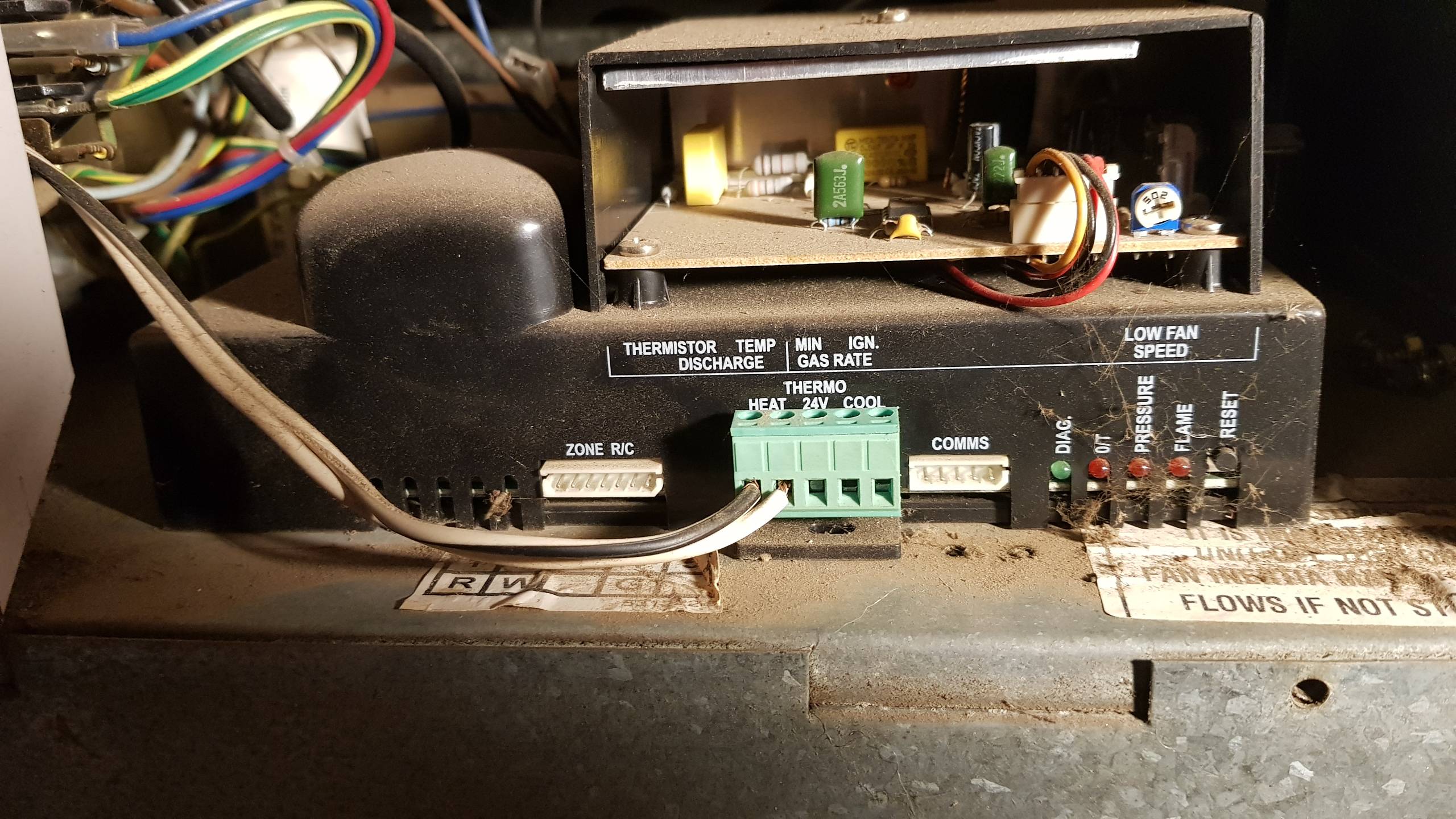 RGW CRGW C
3133 bronze badges
New contributor
RGW C is a new contributor to this site. Take care in asking for clarification, commenting, and answering. Check out our Code of Conduct.
Add a comment  |
Highly active question. Earn 10 reputation (not counting the association bonus) in order to answer this question. The reputation requirement helps protect this question from spam and non-answer activity.

Not the answer you're looking for? Browse other questions tagged electrical wiring thermostat-c-wire or ask your own question.