I'm trying to replace a basic on/off switch for the fan in my powder room with a timer switch (which requires a neutral). The timer switch comes with red, white & black wires, the same as what the old fan switch was connected to.

In the same box there's also a light switch which is also connected to another on/off switch in the next room. In speaking to the timer mfg they told me it won't work with a 3 way switch. Instead of returning it I'm assuming there must be a way to separate the fan from the 3 way switch so it'll work.

The old on/off switch had a red & white wire coming from a romex and it had a black wire (power I'm assuming) that connected to a number of other black wires.

Can I get this timer to work?? Thx! 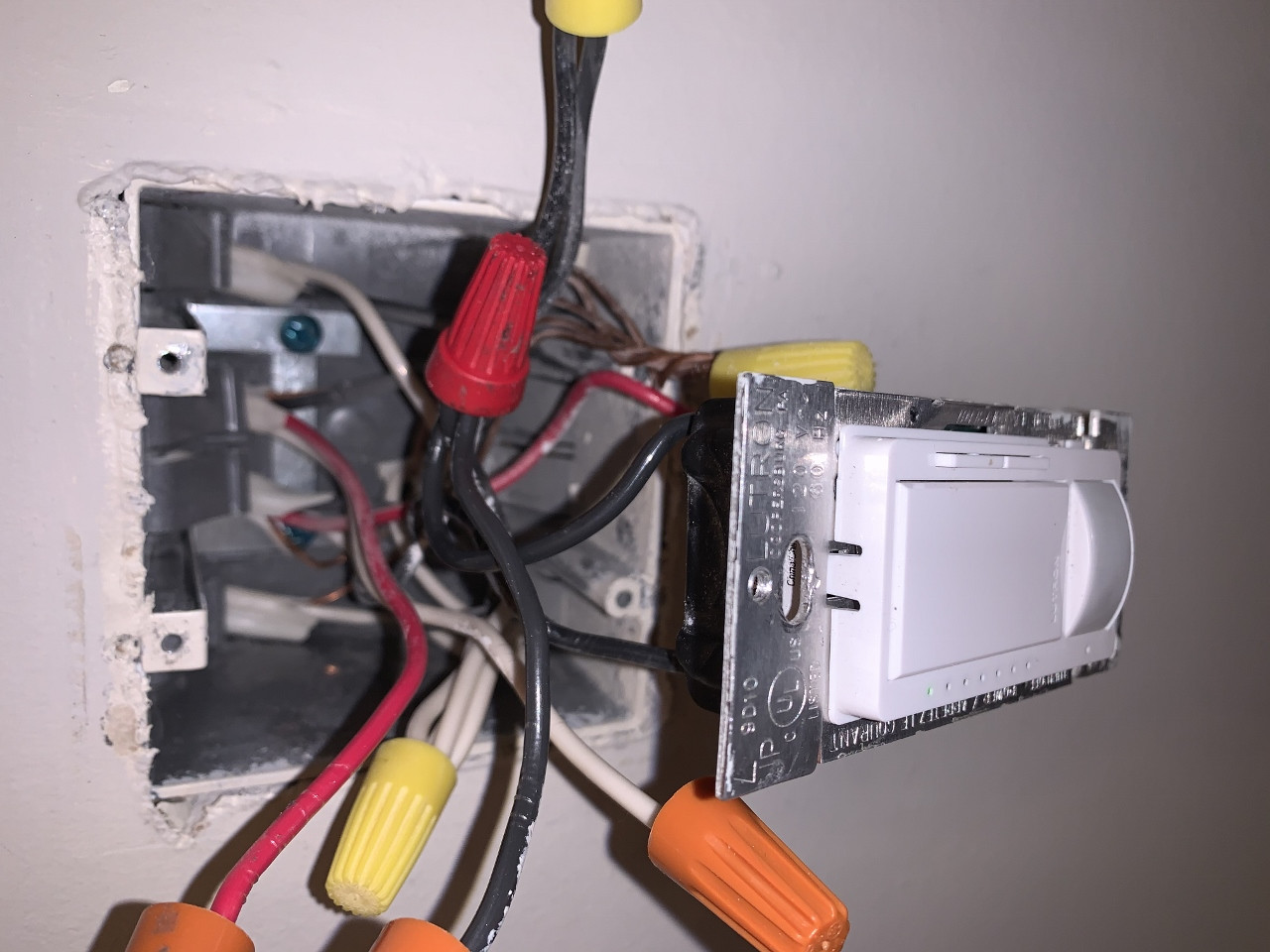 Here's a pic. The 3 wires with the orange caps are what the old on/off fan switch were attached to (which had 1 black & 2 brass screws). The light (motion sensor switch pictured) works independent of the fan. The mfg said the timer switch I bought won't work in a 3 way after he saw this pic. So I'm trying to figure out how to get around the 3 way. A light switch in the next room can also turn this light on and off (and I don't need it if that helps).

Timer Switch This is the timer switch I bought and yes I'm open to buying another digital timer if its easier to hook up.

Here's a better pic, hope it helps (again, the orange screw caps are on the wires that were connected to the old fan switch). 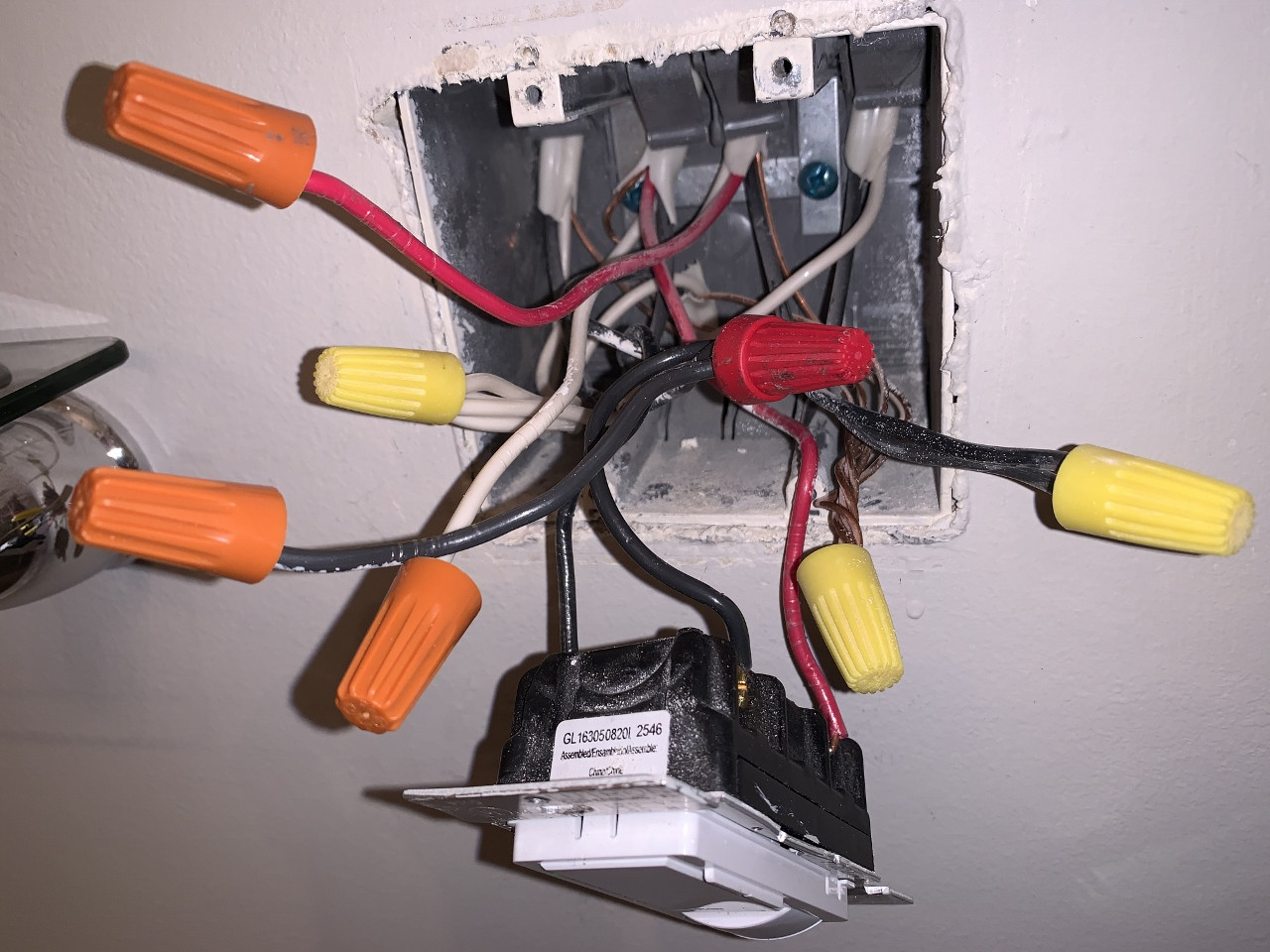 Here's a wiring diagram. There's a 5th romex at the bottom of the box. There is only 1 switch which controls the fan & I think the white wire went to the black screw on the old switch. 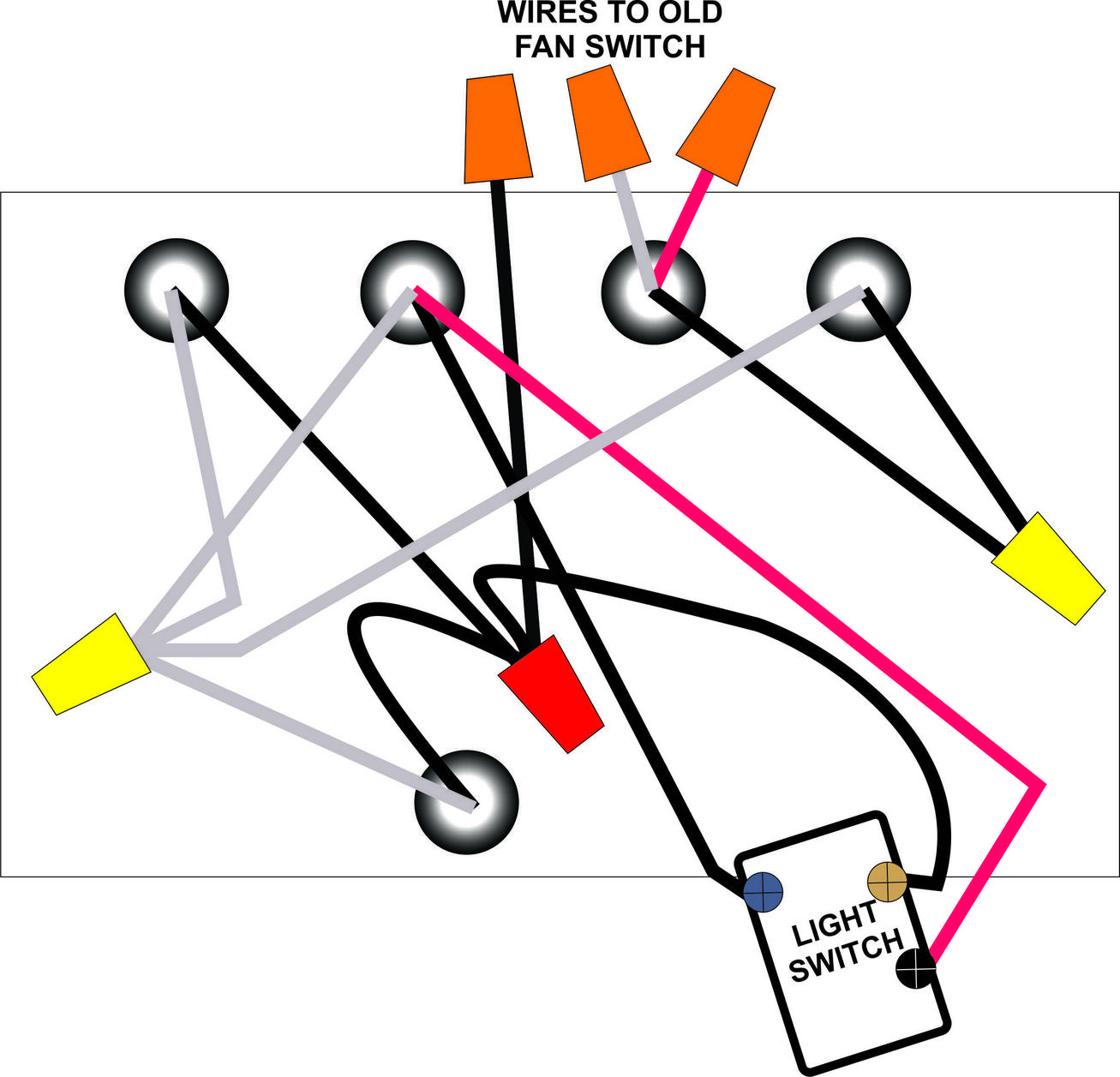 My wiring diagram is correct. It's an optical illusion in the photo. The white & red with the orange caps come from the same romex.

Does anyone have a suggestion? Thanks everyone!

Thanks Phase 3 & Harper for your answers!

Harper I had a question. You said "OK, since you say only one switch operates it, I assume the 3-way switch at the other end has been disabled. Okay, all three wires in cable 3 get disconnected and capped off (2 of them already are)." The switch in the next room still controls the light (only) and nothing has been disabled. Does that affect your answer?

Harper - I tried your answer and the timer works! Problem now is that the light doesn't work. :-) Since you assumed the 3-way switch at the other end was disabled, I disconnected the wires on that switch (in the other room) and capped them off. Would this have caused the light not to work or do we have another issue? Thanks.

I put the wires back on the switch in the other room and everything works!! Thanks!

What a weird situation.

I would use electrical tape to re-color these as follows: The 2 travelers (white and red) from cable 2, make them both yellow. The black wire in cable 4 is a switched-hot; color it red. The wires in cable 3, I don't care about because we're about to deprecate them.

OK, since you say only one switch operates it, I assume the 3-way switch at the other end has been disabled. Okay, all three wires in cable 3 get disconnected and capped off (2 of them already are).

The black pigtail from the clump goes to the supply hot on that timer.

The black wire from cable 4 goes to the load wire on that timer.

Timer neutral gets added to the neutral bundle.

The good news: you have all the wires you need

The good news is that you have all the wires you'll ever need here. The bottom cable and the leftmost top cable carry always-hot and neutral, while the center-left cable goes onward to the other light switch with its travelers and neutral. What's more important to us, though, is that the center-right cable is a spur to the other 3-way location for the fan, with both of its travelers (red/white) and the black switched-hot, which then goes off into the far-right cable to the fan alongside neutral.

The bad news: you'll need a different timer if you want 3-way support

As you have discovered, most electronic (pushbutton) countdown timers, yours included, are built down to a price, and thus only support single pole control. There are countdown timers of this style that support 3-way control, but they require that a matching companion switch device be installed at the other location, which just means we have to do a bit more work.

Matching the style of your original device leaves us with one option, unfortunately, though, and that's the Leviton Vizia LTB30-1LZ paired with a VP0SR-10Z remote. This gives you the classical "pushbutton timer" functionality at the main location that you are looking for as well as ON/OFF operation at the other location.

As to the hookup

Fortunately, the LTB30-1LZ (or one of its LTBxx brethren, depending on the timeouts you want) isn't too hard to hook up, even with the remote involved. With the power off at the breaker, of course, we start wiring this with the remote 3-way location as follows:

You can then button up the remote location, and move onto the timer location, which gets wired as follows:

Once this is all wired up, you can button the box up, turn the power back on at the breaker, and enjoy your new timer!

Not the answer you're looking for? Browse other questions tagged switch timer or ask your own question.