What size, type, and grade of lumber would I need to use as joists to support wire decking used for pallet racks over an 11-foot overhead span?

42D" x 46W" wire decks supporting up to 2,500 lbs. are commonly available
online. This is industrial-strength wire decking but my intended use would be general purpose overhead garage storage so I'm not looking for 5,000 lbs. per span. 1,000 lbs. would be nice, if possible.

According to one manufacturer, their wire decks can be supported by a 1.5 inch wide beam, so 2x lumber would be a fit. My plan would be to use 2 46" wide decks over each 11' span, so each set of decking would be supported by 2 joists 42 inches apart connected to wood beams (ledger boards) anchored to the cement block side walls.

The garage is 11' wide, so shorter or longer spans are out. Steel pallet beams are out as an 11' span is not a standard size (not to mention mounting considerations).

I'm turning to this forum in desperation. After hours of searching online it seems that I am the only person in the world to come up with this idea. The only links returned by search engines only seem to be ones that want to sell you something.

I see a number of span/sag calculators online but none seem to fit these parameters.

I might be getting the hang of this. It apears that the design of the racking transfers the load direcly onto the beams.

Double that because the weight would be distributed between two joists and you wind up with ~100 lbs./ft., suggesting that a 1,000 lb. load is practical. Would probably have to derate for commodity lumber grade.

Probably still qualifies as an experiment though. 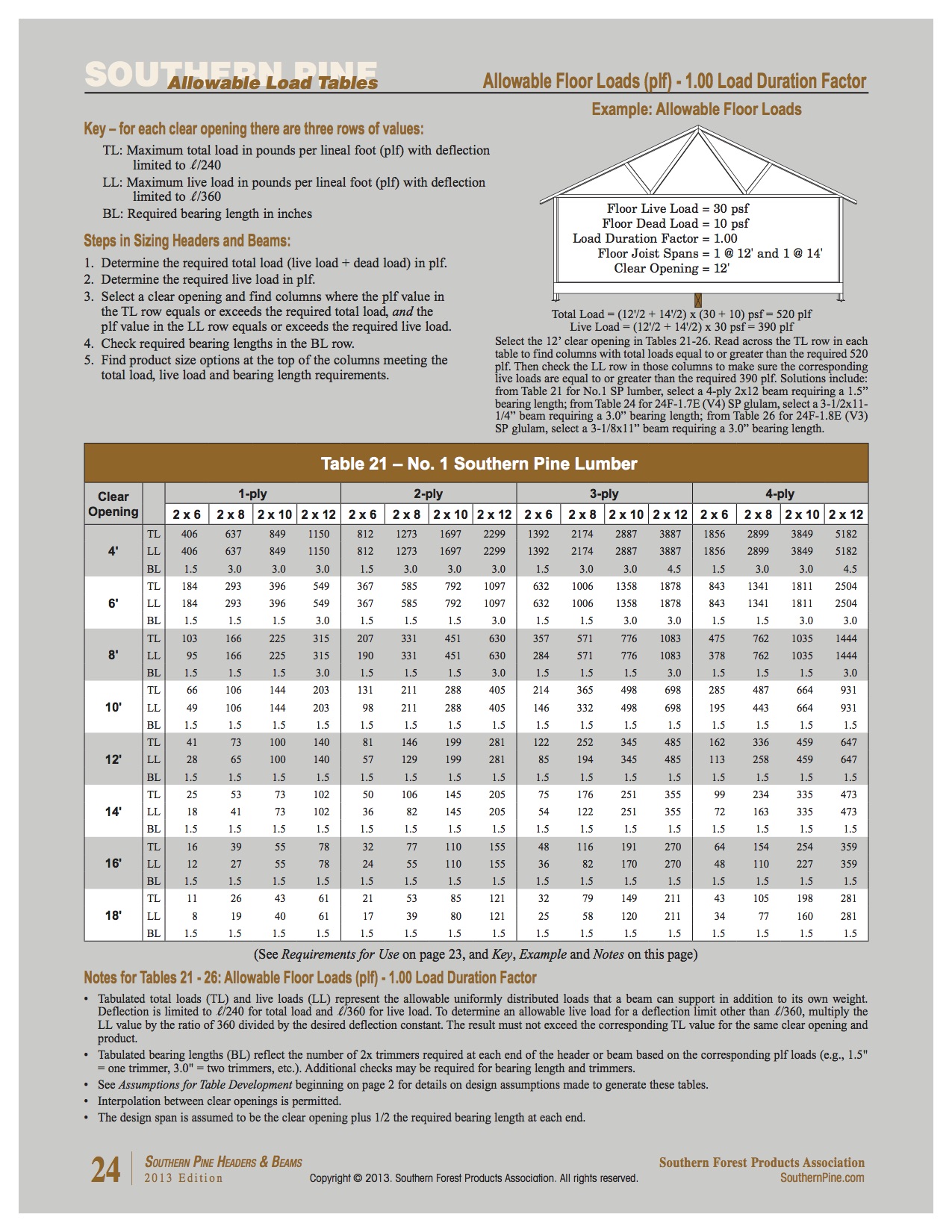 I think I see what you want to do. You want to run two joists 11' across your garage 42" apart, and use 42" x 46" pallet rack for the floor rather than the usual plywood, and you're trying to determine what size joist to use.

The usual span tables are not quite right to answer this question. The span tables that are published are based on the length of the span, the size of the joist, the type of wood, the live and dead (uniform) loads on the floor, the acceptable deflection, and the spacing between joists.

Right off the bat, the span tables won't list spans for 42" spacing. They make tables for the commonly used values, 12", 16", and 24" on-centers spacing, but not for arbitrary values like 42".

You could take this to an engineer, they can do the calculations that are used to generate the span tables, so they can handle the oddball 42" spacing.

The span tables are also built around uniform live and dead loads per square foot, so that will work a little different.

You might be tempted to guess that since you're less-than-doubling the 24" spacing to 42", maybe if you doubled up the joists, you'd be OK. So if the span tables say you're good at 24" spacing with 2x10 joists, maybe you'd be OK with doubled 2x10's at double that spacing. It's a reasonable guess but it would be an experiment.

Of course you could just use three joists - the outer two spaced 42" and the third halfway between them - then you are at 21" OC and if you use the 24" span tables you should be OK. The pallet rack wire grid would still fit over the joists.

It's still a bit of an experiment, I don't know if there's anything problematic about wire grid on wood joist supports that are not immediately apparent - it's not an accepted construction method and it's not anything the manufacturer intended.

I don't like the idea that the wire grids are not attached to the joists, but I couldn't point to a specific hazard where they would lift up either.

edit: this very interesting link was posted in the comments

That calculator does allow you to enter 42" spacing. The only part that seemed a little wonky is the Grade selection, it was only with the Grade "misc" selected that doubled 2x10's came up as an acceptable beam:

Keep in mind that if you just use plywood and standard joist spacing, you can turn this experiment into a nice boring, safe, standard, business as usual construction project. You'll save money, gain some peace of mind, and when it comes time to sell the house, you won't have to have a long discussion with the home inspector and prospective buyer.

You could go with used 12' steel cross members and take them to a fabrication shop and have them cut to length and have mounting plates welded on in order to bolt them to your wall.

Or buy the uprights that go with them take them to a fabrication shop and have them cut to length and have the brackets welded on and have the advantage of adjustable height shelving.

It would not cost to much to have them modified and you can move them or take them with to a new location. Plus you would save space from haveing 2x10 ( or bigger ) wood beams.

Not the answer you're looking for? Browse other questions tagged wood wire beam decking or ask your own question.

2
How to enforce wooden shelf with steel strip
5
Where can I find information on making footbridges with a long span?
0
Beam size and material for 15 feet long swing
0
Steel beams for 22' interior clear span
0
Can someone help me to verify if my balcony can handle the load of a hot tub
2
References to calculate lumber size and span for flat roof?
1
Proper window header for 6-foot window & understanding the span tables?