Approximately 1 year ago we had a wall treated with damp proof course injections (silicone I believe) and we then rendered with a mixture including a relatively strong mix of good waterproofer.

After a few months we started to see what appeared to be a recurrence of the damp on two wall corners.

We've now had the company that injected the chemical DPC round and they have found that the plaster where this damp is showing is quite soft. They therefore claim that our plaster / render is deficient as this is coming through from the wall still having moisture in it, and that "good" render / plaster would still be hard and holding this damp in, even if there was rising damp there, so as it's soft then it has to be the plaster / render.

The image below shows this issue. I find this hard to take (partly I'm sure because of the time and money invested and at risk from their assessment) but also because it looks so much like it's damp rising through the corner of the wall.

Should I accept that this is residual moisture, 1 year after treatment, and that our render is definitively at fault?

Edit: to clarify this is a wall between the kitchen and entrance hallway, approx 1m from external wall. Original issue is rising damp - house is from early 1900s so built without a DPC. We are near a river and water table is relatively close. 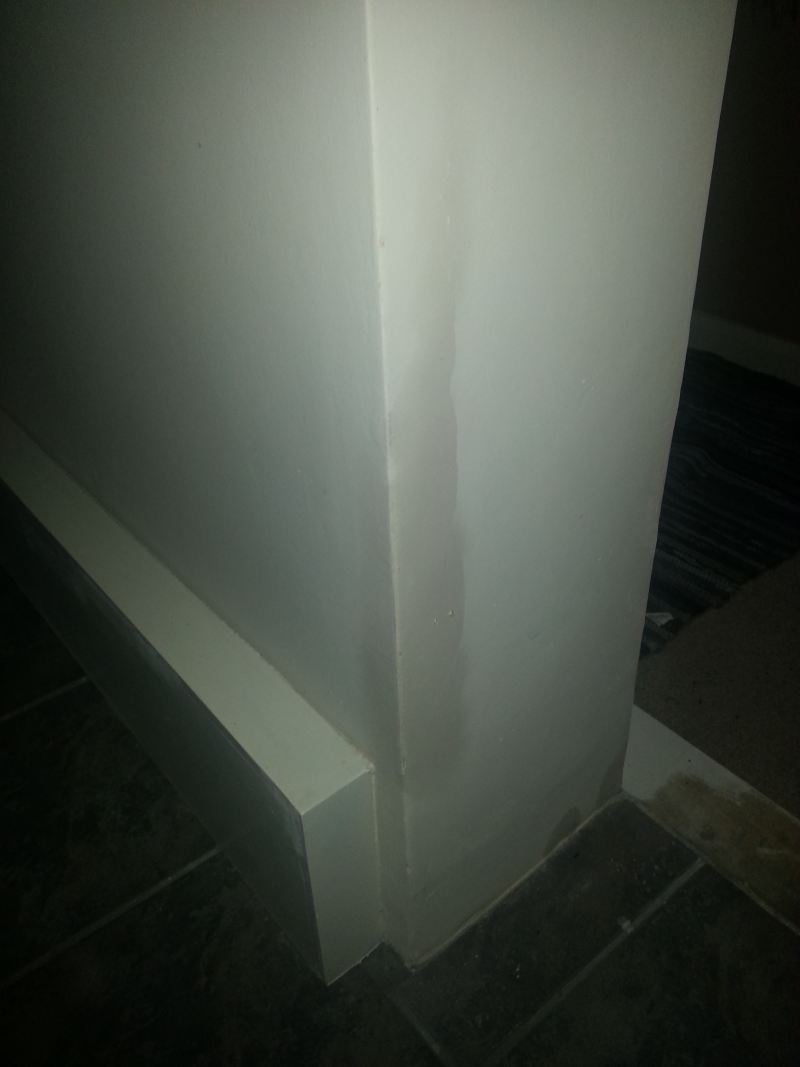 "Deficient" render? That is a line of bull. Your use of damp proof course and render makes me think you are UK based. If so, you should have a guarantee of several years for the damp course work, and if so you should demand they fix the problem as they clearly missed a spot. Residual moisture? Don't make me laugh. They need to do fresh moisture measurements and to re-course the areas that still show high moisture content.

At the same time look at your exterior brickwork in the area of the damp and make sure that your pointing and exterior render isn't blown. Also, when it rains make sure your guttering is piping the rain down to the ground properly.

There are two things going on here. One is that the damp-proofing is clearly deficient. If it wasn't, then you wouldn't see moisture here. End of story, right? Well not quite, because if the plaster is getting soft from rising damp, that's a sign that the wrong plaster was used. Probably something gypsum-based, which is a bad choice for an old house with residual issues with rising damp. These types of buildings were originally finished with lime plaster, which is not water-soluble the way gypsum plaster is. It may get wet but it will not soften or disintegrate. Lime plaster would be the correct plaster to use in your house, not gypsum plaster with some kind of synthetic waterproofing agent added.

Not the answer you're looking for? Browse other questions tagged walls render damp-proof-course or ask your own question.

0
How do I render over a DPC (damp proof course)?
2
How can I damp proof this wall?
3
What should I do to make good on some lightly water damaged plaster?
8
What should I do about my rendering & damp-proof course?
4
What can I do about a house with internal concrete floor with no DPM?
0
Has the DPC (damp proof course) failed if moisture is showing above paint?
-2
How to determine if damp smell, marks, cracks, mould, on internal walls is from; rising damp : condensation or other