EDIT Attached pics. Also there's another plug on other side of sink with exact same set up broken tab between hots (hot red, hot black and 1 neutral and 1 ground). Are kitchens usually provided with more power to the outlets because of appliances like freezers, fridges, microwaves etc? Or is the wiring shady in this house? It was built maybe 1980s / early 1990s. I'm just looking for the best way to install a GFCI. Thanks

Good day. I'm looking to change my kitchen receptacle to GFCI that's beside the sink. The old plug has two hot wires (black & red) with a broken tab in the middle. It also has one neutral wire on the other side and a ground wire. Is it safe and acceptable to cut the hot red wire, cap it off and just use the black hot and neutral with ground? I'm having a hard time understanding why the plug has two hot wires to begin with? I've tried turning the surrounding switches off and on testing both outlers, but they both seem to carry constant power? Any insight would be greatly appreciated. I'm in Canada. Ontario to be more specific. 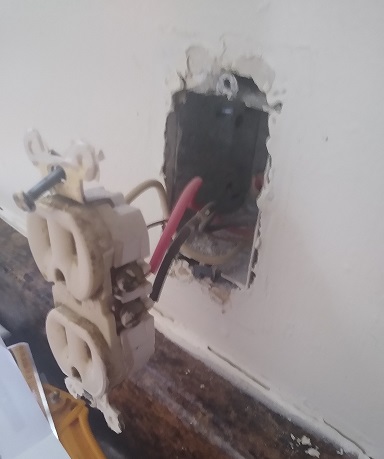 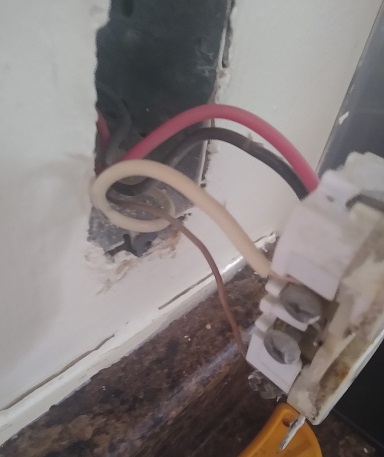 First, don't cut wires in a situation like this. You never want to do that unless you are trimming the length of new cable you just installed, and that won't happen soon for you. Take the nipper back to the store. I'm aware some Youtube videos promote cutting wires, but they tend to be tool-happy because they make money when you buy tools. Wire length is precious - it can't be added back on. Remove wires by loosening the screw on the recep (even if it's back-wire), and/or twisting the wire out of a backstab connection. Note that once a wire is pulled out of a backstab, its spring is damaged and the backstab cannot be reused. But never use backstabs anyway, as they are unreliable.

Do you even need a GFCI?

It's rather unlikely that a GFCI receptacle is protecting this outlet. Trip any GFCI receps you already have and see if this outlet loses power, but I'd expect not.

However, there's a fair chance this recep is being fed from a GFCI Breaker. If so, that breaker will have a "Test" button.

Either way, if pushing "Test" on a GFCI breaker or recep causes this recep to lose power, your work is done.

I am kinda getting the impression you were intending to do this with the power switched on. Honestly that makes me think this is less of a daredevil act and more an unawareness of just how dangerous electrical power is. You may have had stories or experience of people who got zapped and got lucky - that does happen a lot - but people win Russian Roulette 5/6 of the time, so "usually" is not a reliable indicator of safety. Further, you are almost certainly dealing with 240V here, which is way more than you bargained for.

We gotta look at the breakers.

Expect a situation where 2 breakers control this receptacle's power. The breakers may be tied to trip together, or they may be independent. But they must be identified. You already have a good grasp that they are separate, and how to test for that, so put this to use to identify the up-to-2 breakers that control this.

Now, I suspect you have a multi-wire branch circuit, where two carefully placed hot wires share 1 neutral. "Carefully placed" means there is 240V between them, which is not to trifle with. However, "carelessly placed" means your neutral wire is a ticking time bomb about to overload. There are further safety requirements to protect people who are less aware than you, and we need to attend to those also, so identifying the breakers is essential.

If there are two separate, independently thrown breakers, then please cut up a Post-It note to make flags, and stick them on the relevant breakers and shoot us a shot of the 6-7 breakers in either direction, and edit it into your question. We can then advise on correcting the safety issues with the breaker. If you follow the "GFCI breaker" advice below, that will moot this.

The simple way: Choose a side

The simplest way to hook this GFCI recep up is to simply pick either the red or back wire, and cap it off. Usually we straighten out the wire, and cap it off with a "wire nut" - with the wire nut then taped down so it stays put, as wire nuts won't stay on single wires. (you should never need tape with 2+ wires or you're doing it wrong).

Then, hook the neutral and the remaining hot wire to the new GFCI device.

This has a disadvantage: you can no longer run two high-power appliances, one in each socket. Now that will trip the breaker. It has another disadvantage that if you have 5 of these to do on this circuit, a GFCI breaker is cheaper and better protection.

A better option: A GFCI breaker

Presuming the above testing identifies two breakers (possibly tied), those 2 will have a red and a black "hot" wire going to them. They can be brought (along with the neutral that is also in their cable) to a 2-pole GFCI circuit breaker. This will GFCI protect every outlet and device supplied by those breakers.

However this also depends on identifying those breakers, having a panel capable of taking a modern GFCI breaker and having room, and the circuit not having any existing faults that would trip a GFCI, like neutral shared with third circuits etc.

(If you find that you can turn the red and black wires off separately, then you have an improperly installed MWBC. This is dangerous and you should ask another question about it on Home Improvement SE.)

If you're making only this one tiny change in your wiring, it is safe to cap off the red wire and use only the black. However if you are making a number of changes like this in your home (e.g. converting more than one outlet to GFCI), you must determine which changes are on which circuits before proceeding.

I would tell you to use the red wire in half the cases and the black wire in the rest, but you can't remodel your home wiring based on guesses. You have to trace everything first.

In any case, always make a note describing what you have done and tape it to the inside of the service panel door.

It looks like you have a multi wired branch circuit, not uncommon. Previous owners might have needed two 15 AMP appliances operating at the same time. Two out of phase hots going to the same receptacle and separated by the broken tab and sharing the neutral. You'll probably notice a dual breaker with handle ties or double pole breaker feeding this circuit. If nothing else is down stream on this circuit then you can cap the red and just use the black and white wires. Check the wire size and breaker size to get the right size GFCI. Use the line terminals, not the load. Turn off power before doing any work and make sure both outlets are off since you have two hots.

If the outlet in your new picture is on a set of different breakers, you can add a GFCI to it following the same plan. Be aware that outlets at countertop locations need GFCI's. If they are on the same set of breakers, then cap a red at the first location, use black, white on line terminals. At the second location, cap black and use red and white on line terminals. Remember to connect all grounds.

Call a licensed electrician. Lot's of bad advice floating in this tread. If you are confused by a grounded conductor ( the "Neutral condutor" which carries unbalanced load back to POC at Service Enterance) then you shouldn't be giving advice. The grounding conductor is a low impedance path to earth ground required to be 25 ohms of resistance or less. Electrical is not a diy thing you should try. The codes required to protect people and property from the hazzards associated with electrical energy are hundreds of pages long. They take years of studying and applying them in means and methods in the field, as well as proper training in an apprenticeship to have a skill set that allows safe installation of electrical. Call a pro out. If you dont get the GFCI installed correctly, you could get shocked, someone could be electrocuted, or you burn your house down. Call a pro!

You've already investigated the switch possibility. But have you considered that there might have been a switch that has since been removed? If you check the other boxes on the circuit and find one with the red wire tied to black with no switch, this is probably what happened.

If, when you investigate circuits, you find two different circuit breakers involved, then I would check the voltage between the red and black. If it is 240V, OK. If it is 0V, you may have a more serious problem.

2
How do I wire a GFCI switch/outlet receptacle?
2
Installation of a GFCI without a ground wire
1
How do I install a GFCI receptacle to replace an old non-GFCI receptacle in a switch controlled outlet?
3
Did I replace receptacle with exact same configuration?
0
Is it safe to cap off live red wire in split receptacle?
0
Light switch not working; both outlets are always hot
1
Wiring GFCI/Switch Combo
0
Is this how I add GFCI and Regular Outlet to existing Multi Wire Branch Circuit, 20amp? 12/3 to 12/2 wiring with GFCI
0
GFCI in kitchen