I have a potentially simple question about the wiring in my separated garage after I upgraded the feeder wire from my main distribution panel. The garage was previously grandfathered in without a ground. I am replacing a ton of concrete between the house and garage and its the last time i can access that area. (plus the old wire was just put down on the ground and the old concrete path was poured over it, doubt that was proper.... it didn't survive the concrete demo). I ran a new proper three wire with ground.

The question I have is, do I simply separate the bare grounds and neutrals to their individual bars? Is it that easy in the subpanel after everything else is done, or could there be more complicated changes that im not processing by separating these. ie. need to upgrade garage plug and light circuits as well. Should everything still work the same once i separate them..? I am absolutely overthinking this! Thanks! 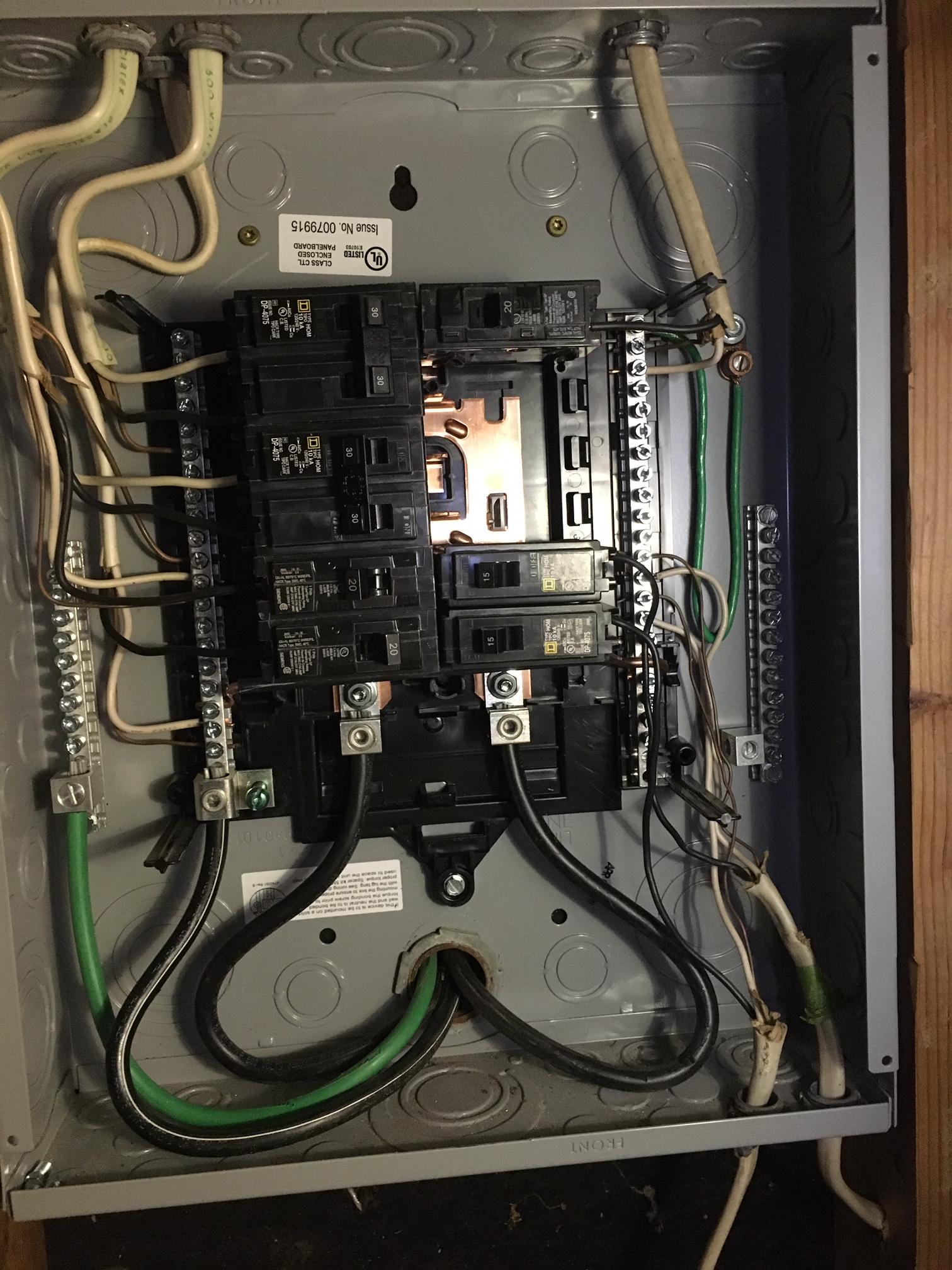 In addition to separating and isolating the neutral from ground you also need to drive a ground rod(s) (some jurisdictions will require 2 even though it is an accessory ground) and bond any other metal piping system in the garage.

You'll need to pull the bonding screw out

Since neutral shall only be connected to ground at the service entrance and nowhere else, now that you have a four-wire feed to the garage, you'll need to pull the bonding screw out of your garage subpanel. In your case, it's next to the neutral lug on the bottom left of the panel interior. Once you have that done and the ground wires for the branch circuits moved over to the ground bars, you can then focus on the next problem; namely, fixing the grounding electrode system at the garage.

Getting the rest of the way grounded

In order to add a grounding electrode to the garage, you'll need to drive two 8' ground rods roughly 8' apart and connect them to each other and to the ground bus in the panel with 6AWG bare copper wire. That ensures that any naturally induced currents (from lightning and such) get returned to terra firma, while the ground wire returns errant mains electricity back to the utility.

Finally, since this is a Siemens panel, you need to be using Siemens QP or Murray MP breakers in it, certainly not Square-D HOMeline breakers! So, you will need to get two Siemens Q230s and two Siemens Q115s and use them to replace the existing Homeline breakers in the panel. (Alien breakers appear to fit, but have not been tested by UL or anyone else to work, and thus may not fit correctly, which can lead to trouble down the road.)

You need a main breaker in this detached building

Sorry, what you actually need is a "main disconnect". Further, if you're in Massachusetts, the main disconnect needs to be on the outside of the building because they adopted NEC 2020 already.

For everyone else, a "main breaker" is usually the cheapest and most expedient way to get a disconnect switch for a subpanel. That particular subpanel looks like it's built with space reserved for a drop-in main breaker. Consult with a competent Siemens dealer, and they're also the people to ask about whether your cover can accept a main breaker; otherwise they can probably get you a replacement cover that can.

If that just doesn't work (or you don't like the price), you can mount a 2-pole breaker in the normal breaker spaces and backfeed it. That breaker will need a tiedown strap.

The best grounding rod known is an UFER ground

What usually happens, though, is the concrete people never think of providing that, or the novice sees it, doesn't get it, and angrily hacks it off.

It is not a detached building if there's a breezeway

So if there's a breezeway, you don't need the disconnect or the grounding rods.

You're gonna need a bigger panel

Not quite yet, but eventually. You really don't have much expansion space left in that panel. I gather it was the right thing for present needs, but you'll soon be out. That'll happen sooner if you use a back-fed breaker as your disconnect switch, because you'll only have 1 space left.

"Oh, but I can just go to double-stuff breakers at that point" Not with NEC 2020, once that comes into effect (0-3 years), almost every circuit must be AFCI, GFCI or both. AFCI must be breakers ($40) and AFCI+GFCI breakers are only $10 more, so that's the economical way to do that. Your existing circuits will be grandfathered, but I'm not sure that'll allow you to convert to double-stuff then, since that removes any possibility of an AFCI upgrade, and you're not allowed to make a grandfathered situation worse. I can't believe I'm saying this, but it might be prudent to convert to double-stuff now while it's legal. Since you have to replace four of your breakers anyway due to being Square D.

Hey, since you need more spaces anyway, how about getting another subpanel and extending off this one. It could be Square D :) J/K it's only $30 worth of breakers...

3
Advice on wiring a pool panel from a subpanel

3
Grounding requirements for main panel and subpanel
2
Distributing load in electrical panel
1
My subpanel has neutral and ground all mixed together?
2
Turning 100A Main to subpanel of 200A new main
2
Sub Panel grounding questions... wire size, how-to's
3
Is there any issue with the neutral and ground being connected in this panel?
3
Advice on wiring a pool panel from a subpanel
1
Have four-conductor feed at detached garage subpanel, how to verify the ground?