Breaker Trips when turning on saw

I do wood working in my garage. I have two saws a miter saw and a table saw. About 1 in 10 times when I start either of the saws the circuit breaker will immediately trip. Nothing else is running on the same circuit at the time of the trips. They have never tripped after startup, including when actually cutting wood. The breaker is a 20 amp breaker. I attached an image of it and a label of the panel. The outlet is GFCI, but its not the GFCI tripping its the breaker. Their cords dont reach the outlet, they are plugged into this extension cord.

What are possible solutions to stop the breaker from tripping? I read about trip time delay, is there a way to identify the trip time delay of my current breaker? My guess is the solution will involve messing with the panel which I am not comfortable doing and will get an electrician to do, but I am interested to know what they might do. Also interested if there is anything I should try before calling an electrician? 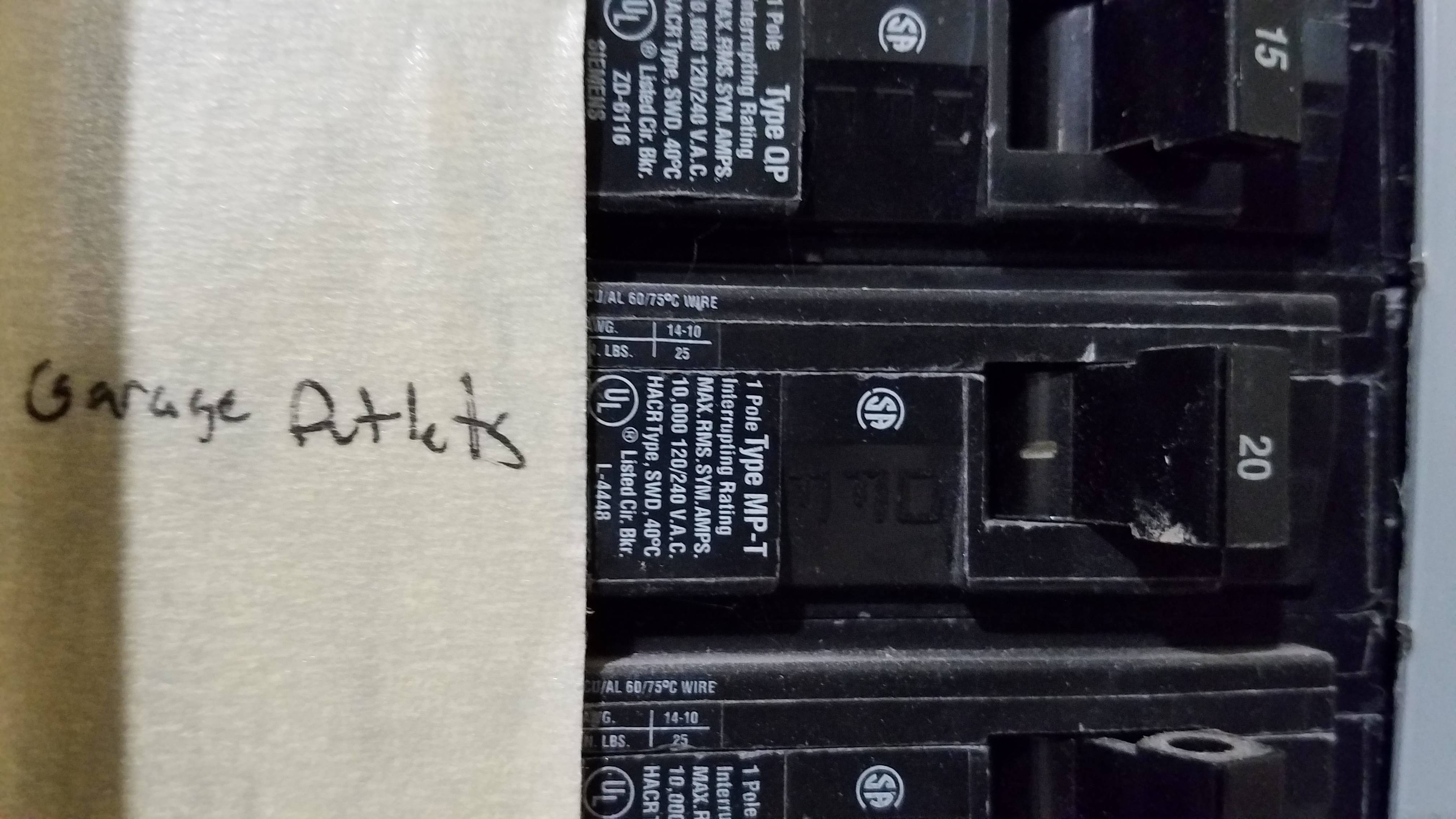 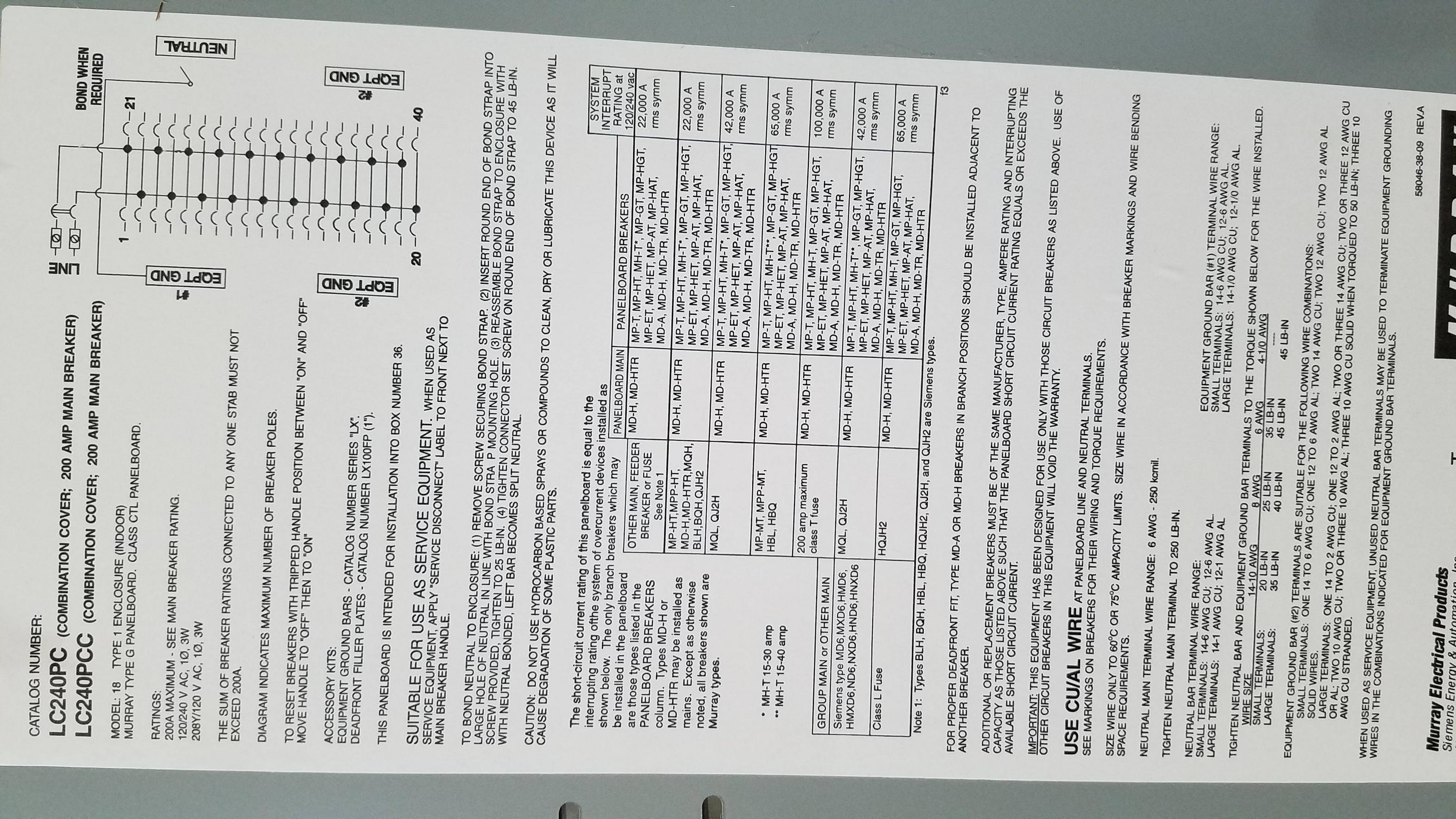 I believe your problem is the extension cord. Is there any way you can locate the saw(s) so that they can be directly plugged into the outlet?

What happens when you use an extension cord with an induction motor (which is almost certainly what you are dealing with) is that there is an initial surge of current until the motor builds up a resistance (called back EMF) as its magnetic field starts to stabilize. When you use an extension cord there is voltage loss across the cord and so it takes more current to generate the back EMF.

Another possibility is to get yourself a heavy duty extension cord so as to minimize the voltage drop due to the cord. These are generally more expensive since they contain larger copper conductors but may help resolve your problem. I realize your cord is marked as "heavy duty" but it's a 12 ga cord. A 10 ga cord is probably a better choice here.

You have to look at the Breaker Trip Curve and read the docs.

Magnetic trip is an instantaneous trip. That is the non-curvy part of the trip curve. Current makes a couple of turns around a solenoid; when the current exceeds some wildly large number compared to the breaker's rating, SNAP!

What the trip curve tells us

You are fighting magnetic trip obviously. Let's take a look at the data sheet and squint our eyes at the poorly rendered, almost unreadable -- oh wait, nevermind. They give it to you in a nice chart. 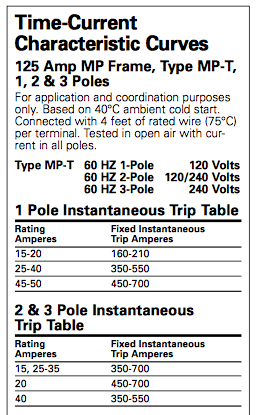 You have a 20A breaker, so the "fixed instantaneous trip amperes" are 160-210. Now I'm not exactly sure if they mean "15 is 160A and 20 is 210A" or if either one could be that range. But there you go; you're pulling at least 160A of locked rotor amperage to cause that to happen. Now go back and look at your motors and see what they say.

Are you doing something dumb like having a dust collector that spins up with the saw? Coz that would do it right there.

Or, the breaker is defective.

Buying ourselves some more starting amps

Now, there is a rule in NEC (430.52(C)(1), Exception 2, I believe) that allows you to bump your breaker size (e.g. to 25A or 30A) given certain characteristics of certain specific motors. However, it's a no-go since this is on a general-use circuit. It might be workable if the saw circuit was dedicated.

Now, look in the next section. "2 and 3 pole Instantaneous Trip Table". Much different number. Hurm de durm... I don't see anything wrong with plugging a 1-pole circuit into half a 2-pole breaker. We have a couple of those in service, one that the power company installed themselves where it's a 30A/120V circuit on a 30A/240V breaker. So swapping that 1-pole breaker for a 2-pole (which will, notably, take 2 spaces) will buy you the higher instantaneous trip numbers -- a good way to gain the value of the 430.52 protection without increasing fire risk from thermal trip.

Which begs a question in my mind. A SawStop is a beast of a saw. I wouldn't blink if I saw one that took 3-phase. How the blazes are you powering that off a plain ole 120V/15A NEMA 5-15 plug??? In fact if it wasn't for the miter saw doing it too, I'd have suspected you of hacking something to make a SawStop work on a plain circuit. I certainly see where there's consumer appeal for a saw that big that can plug in any old place without pulling a dedicated circuit, but it's really pushing limits. I wouldn't do it.

You've got a serious saw that you dropped serious coin on. Get worthy power. Change or jumper the motor for 240V. A 240V/20A circuit takes a NEMA 6-20 receptacle. It installs exactly like a normal recep, with the same wiring, and has almost 3x the available power. Current is halved while instantaneous trip current is more than doubled, so you'll never have a nuisance trip again. Heck, if you have a surplus of 120V circuits in your workshop, you could even rejumper one to be 240V - change the recep and change the breaker and done.

The problem: You are drawing more than 20 amps at startup. Why? A motor is powered by an elctro magnet. An electromagnet is a coil. Coils are just wires. Therefore, a motor wires the two prongs of your outlet together. In other contexts, that's called a short circuit.

When? Your "random" occurrence is caused by the nature of AC current reversing it's sine wave 50/60 (actually 100/120) times a second. It doesn't deliver 110v, that's an average: it's always effectively somewhere between 0v and 170v. When your trigger pull happens to occur while the AC wave is at it's peak, you're bridging 170v with the resistance of the motor's coil, which must draw more than 20A to trip your breaker. This is also when/why tungsten light bulbs usually die when they do: at startup on peak AC voltage: if they turned on when the sine wave was at center, or 0v, the 1/60th second ramp-up would gently turn the lamp on by warming the metal instead of heating it so fast it fractures and burns out.

Why doesn't it trip whenever the AC voltage reaches peak, or when cutting a thick board? As the blade spins, it turns the coils on and off, at least once per spin, usually more. This mean the short circuit is brief. When the blade is still, that partial-spin takes MUCH longer. If the motor contact brush happened to stop at the front of a contact, the next cut won't un-short until the brush passes the whole length of the contact, the max delay, and most rotation needed; a worst-case.

So far, we've identified two factors: the timing of the AC duty cycle on start, and the duration of the short as a factor of blade speed and start position. There's another factor, far to complex to dig into here, which is the inductance of the motor coil. In short, this inductor effect can make the load appear larger, depending on motor type and driver design and the timing cycle.

What can be done?

Option: Put a circuit breaker in front of it, so that you don't have to walk to the actual breaker. Simple, safe, but doesn't really stop the problem.

Option: Limit current with resistance. A good extension cord makes this problem more likely to occur than with a marginal one. Use more/longer/cheaper extension cords between the saw and outlet. The goal is to introduce resistance into the circuit which will serve to limit the amount of current the voltage from the outlet can provide according to Ohm's law. Waste would be converted to heat, so if making lots of starts, keep an eye on the cord/plug temp and take a break if it gets to hot to handle.

Option: Replace the switch. If you used a solid-state relay to turn the saw on/off, instead of the naive mechanical switch, you can control when the switch actually switches. Some relays come with a "zero crossing detection circuit", which means that upon activation, it will wait up to 1/60th of a second to actually turn on at the instant the AC is balanced at 0v, avoiding a dead-short on peak voltage. You could zip-tie the trigger on, then nearby glue on a small button (or foot pedal) to trigger the relay, which switches on the saw.

Option: Slow down the motor. A motor speed controller would limit the current of voltage spikes. Come to think of it, they would all likely include a zero-crossing circuit, so even at max speed, effectively used invisibly, it should prevent breaker-tripping current spikes. It might be hard to find one affordably that can handle 20A of current.

Option: use a 1:1 (isolation) transformer. A current spike would only propogate to the transformer, which itself won't draw more than it's rating. Instead, the output voltage would drop, and the transformer would get warmer, but just for an instant. It might be expensive to get one that handles a big saw.

Option: use a power conditioner with power factor correction. These will have circuitry which can minimize reactive spikes in current with smartly-controlled capacitance. Large industrial motors need them to avoid fines from the utility, but they can cleanup the electrical mess from any motor. This will be expensive and complicated to implement, but would work well.

Not the answer you're looking for? Browse other questions tagged circuit-breaker workshop or ask your own question.