Providing additional support for door hinges with no stud behind

We are preparing our basement living area to be AirBnB-able, and for added peace of mind, we want to replace the thin, single-panel interior door between that area and the rest of our house with a solid-core 1 3/4" door with upgraded hardware. (The unit has a separate entrance and multiple windows, so meets emergency egress requirements without this door.)

Both for security and to support the 90-lb. weight of the solid core door, I want to use 3" screws that will penetrate the stud through both the hinges and the latch/deadbolt strike plates. The door jamb is quite a bit wider than the stud wall itself; the wall has been built up with additional layers of drywall and plywood, so there is no stud directly behind where the door will sit. See the diagram below (1 square = 1/4"). 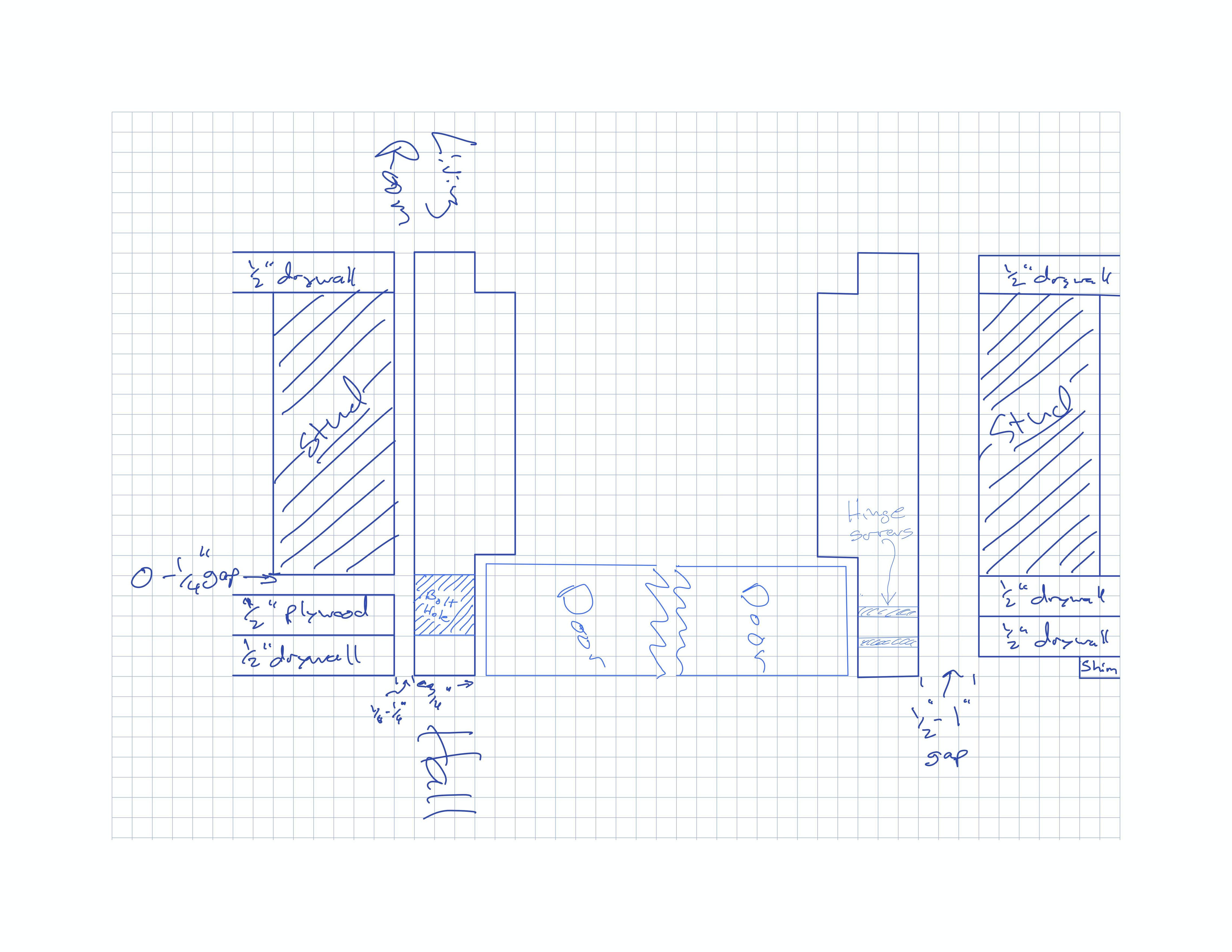 My thinking is to cut back the two layers of drywall (or drywall+plywood layers on the knob side) far enough to sister another 2x4 to the studs cross-wise, then drive the screws through the hinges/strike plates into that. This 2x4 would need to be trimmed to fit cleanly behind the casing (not shown in diagram), so would not be a full stud-size, but I'm hoping would provide enough strength as long as I attach it to the studs with multiple screws. (I was planning to use some GRK 4" structural screws since I have them already.)

I would also drive additional screws through the door frame into the studs, beneath the door stops (which I need to remove anyway to trim to accommodate the thicker door) to better secure the frame.

Does this seem like a reasonable solution? Is it overkill, and I should just rely on the frame itself both to hold the door and provide security? Or is there a better solution to provide the needed strength and security?

Your idea isn't terrible -- it's really nice to have long screws through the hinges, but it still might be overkill.

Long screws through the main part of the jamb that pass close to tight shims and go into the stud will be sufficient. I'd do 4 per side. If you don't want to patch and paint a whole bunch, you might be able to take off the hinges and run a long screw on a slight angle that will catch the stud.

If it isn't an integrated stop as shown in your drawing, pull the stop off and put screws behind it.

3
Do I need a stud on each side to install a swinging shower door?
5
Why do my new door hinges prevent my door from shutting completely?
1
Filling Gap Between External Door Frame and Wall - For Securing Strike Plate Screws
2
Are these doors installed correctly, and are they secure as they are?
4
Can I rehang a door in a metal-clad frame?
0
Easiest fix for crooked door frame
1
Metal door frame; the screwholes holding the strike plates are stripped out. What to do?
3
Our door won't close, is it a sagging door or a misplaced strike plate?
3
Can I remove prehung door from frame when installing?