Having finished major renovations, I'm focusing now on the fit and finish work in a 1964 U.S.A. ranch-style home. As you can see in these pictures, the slap-dash flooring transition is shoddily done around the trim, between a bedroom and its en suite. 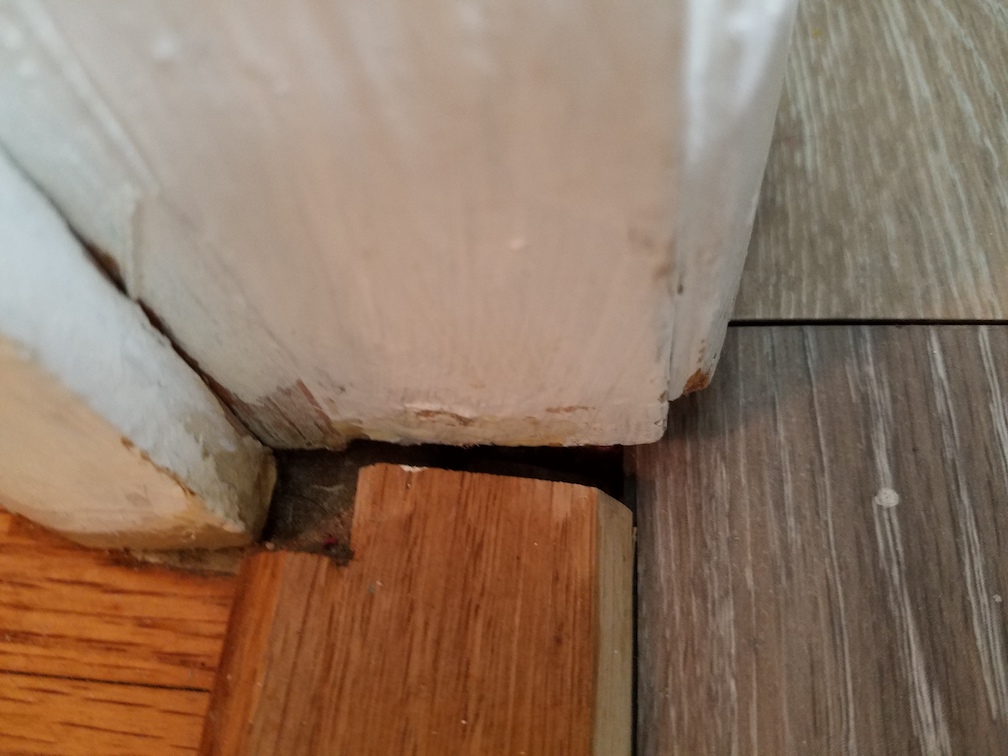 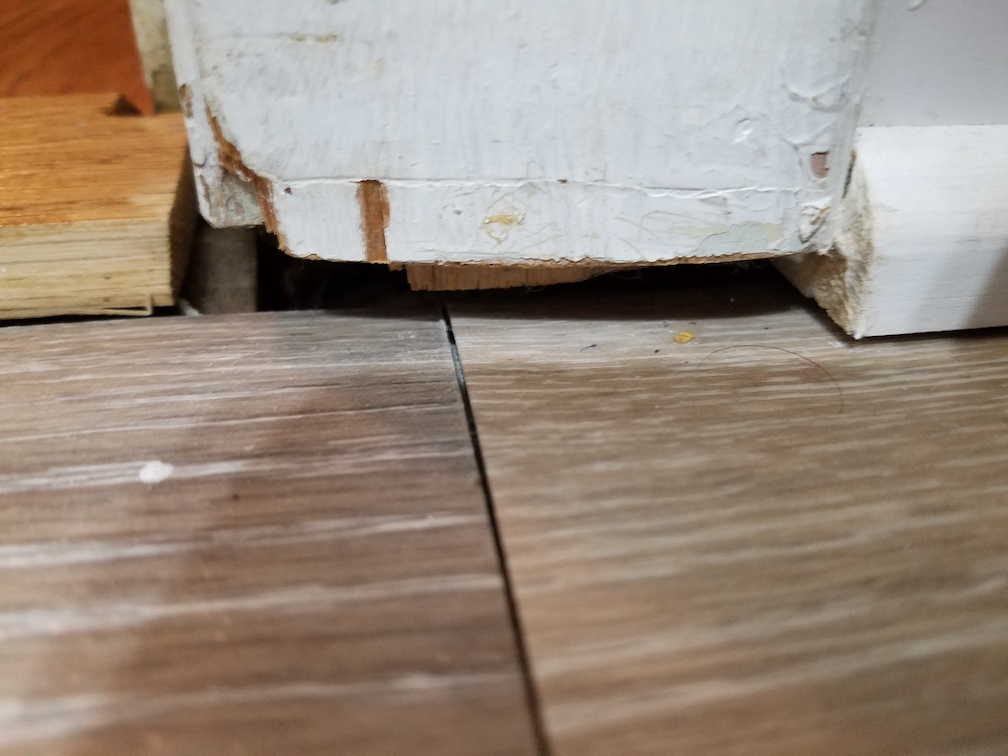 Besides the appalling look, this join is a known bug and outside air ingress point. So my current remediation plan is to:

Is there a better way to remediate this join?

The better way is to extend the door side casing trim to the floor surface. Ideally that would involve removing the old paint covered trim and replacing with a new longer piece.

The alternative, as you propose, to run the base shoe molding under a foreshortened casing is not going to look too great as there will still be an ugly gap due to the rounded top of the base shoe.

It may be a better alternative to cut the door casing up even higher and then place in a block of wood that is slightly thicker than the casing. This can act as a grounding for the casing and the adjacent base shoe can come up to it as well. The end of the base shoe molding can be mitered so that it does not have the unfinished look that the current square cut presents.

The height of this added grounding block could be coordinated with the adjacent baseboard that the base shoe molding is attached to. Additionally you could consider to add a matching grounding block to the other side of this same doorway to provide a balanced look.

The picture below gives an idea of what I am suggesting. It also shows how base shoe molding is cut back at an angle. Note that I am not suggesting that you place a "baseboard and shoe molding" in through the doorway as depicted as the bright white part of the picture. 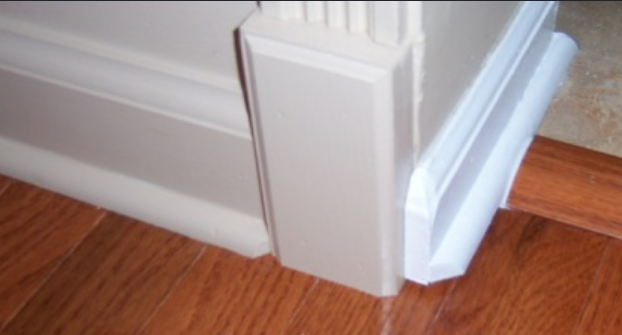 I would still do a takeoff on Michael Karas's answer about extending the door jamb and trim to the floor. I had the same situation where a new floor was installed with a much thinner material than original, so I had many gaps around the bottoms of door trim that had to be remedied. I used a small piece of three-quarter inch wood to serve as a gauge block and an oscillating tool to make the cut.

You would need to remove the miss-cut threshold piece in order to do this, but this would allow a cut to be made uniform and well-controlled so a new part either cut by miter box or table saw could be reinstalled in the gap. To install the new extensions it will require simply using carpenter's glue applied to the bottom of a cut in the jamb after all dust is removed and a smear on a cut and that will meet the original. If the cuts are snug enough they will slide in place and make contact well enough to not need a clamp. In a few cases I have needed to use very thin shims to hold it in place something that had like a knife-edge just to get into the gap to finalize the set of the piece.

The pictures below do not do justice because none of the painting has been done after the parts have been installed also the jamb itself has not been extended as you can tell. But I added the second picture at a distance just to show how well it does blend in rather than something at an extreme close-up. Once a little filler is used here and there, and paint it in it should be practically invisible especially while looking at it while standing up. 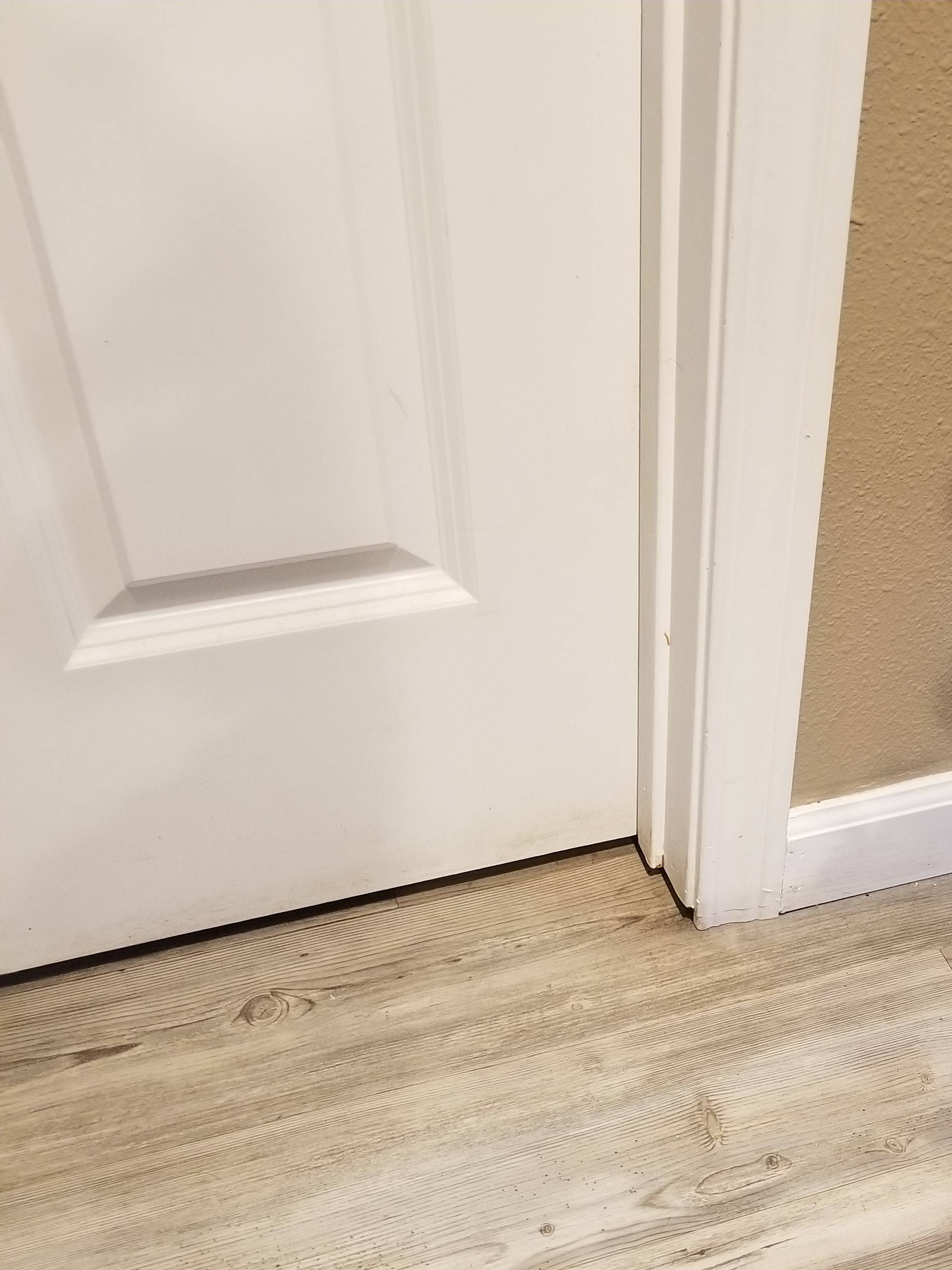 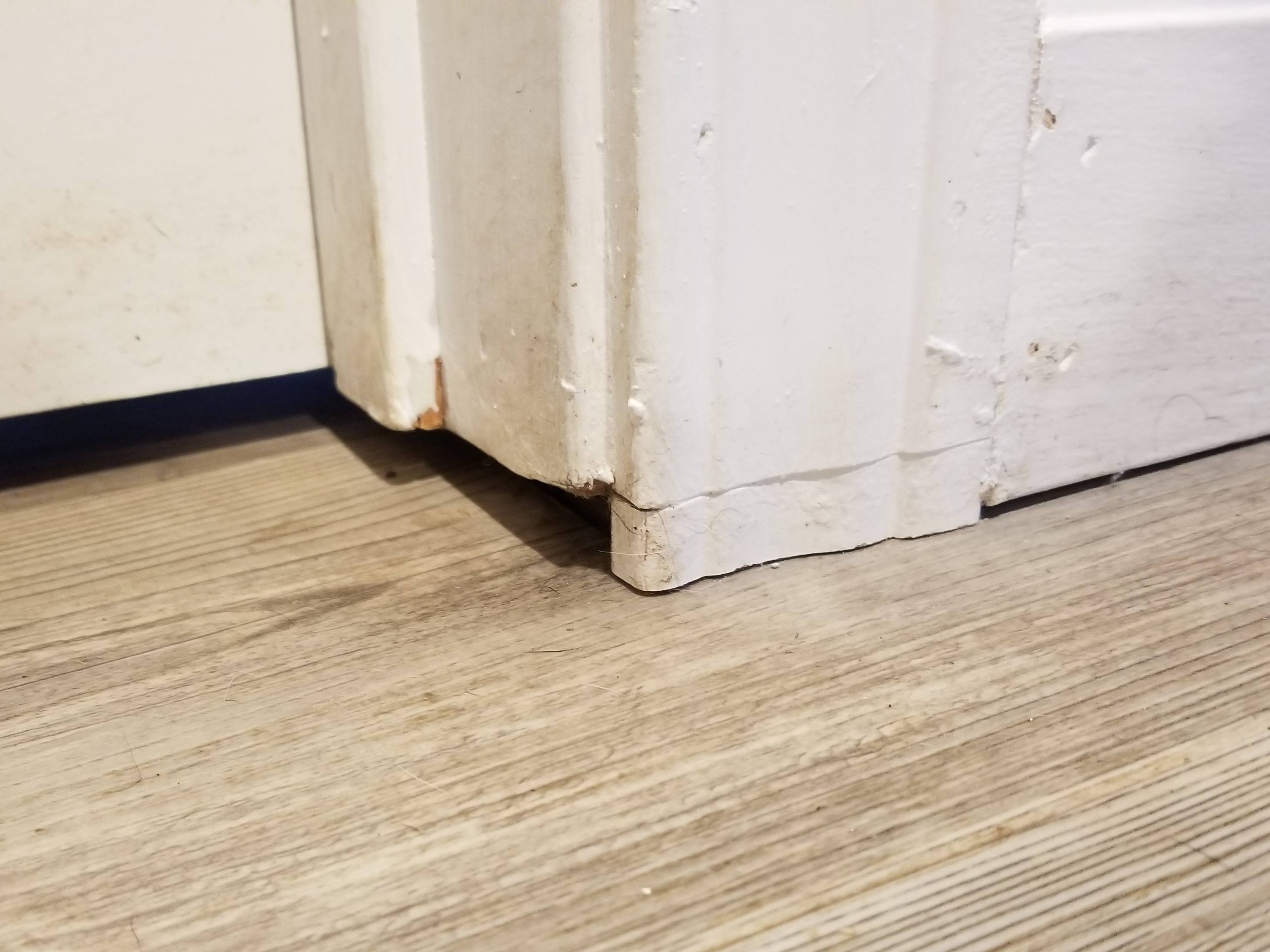 Although not the most ideal remedy and I care not to typically use incredibly short pieces of trim to fix an issue but these have been in for a year and have not moved at all. By far I like the look of this better than the gap that used to be there.

To add the last detail that's important to know. The guide block or the gauge block needs to be large enough so the blade of the oscillating tool can be held flat to it to insure a square cut in both directions across the bottom of the existing trim and door jamb. This will allow the joint to be as tight as possible and the glue to do its work.

Not the answer you're looking for? Browse other questions tagged flooring trim transition or ask your own question.